What is the difference between the “sig” files and the checksum files, such as on the PuTTY download page?

This is about the functional differences between sig files and checksum files and how they can be used by a user downloading some software.

For example, on the PuTTY download page both sig files and checksum files are made available for compiled Windows binaries, as shown below. 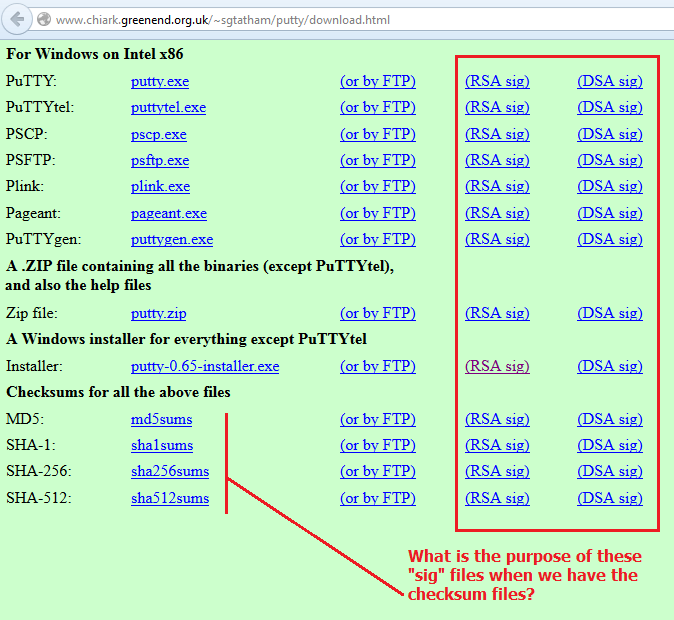 What is the functional difference between these file types? Also, while I know how to check the checksums of the downloaded files, how can the sig files be used (on Windows)?

What is the functional difference between these file types?

When downloading a file, errors may occur during that process. Malware also could modify the downloaded file if you're machine is infected. The file's fingerprint (checksum) is there to tell you that the file is not altered.

Also, while I know how to check the checksums of the downloaded files, how can the sig files be used (on Windows)?

This is more a Super User question. You have there the same question as yours.

Checksums validate simple parity checks; they basically can tell you that two bits have flipped somewhere and the file is corrupt. They do not provide any cryptographic security, because the algorithms are designed only to detect accidental changes to a file.

The signatures, however, are based on PGP (Pretty Good Privacy). The algorithms work on a fairly standard cryptographic idea: there's two keys, a private key and a public key. You can determine that a private key is legitimate given the input file and the public key, but you have no way to determine what the private key was. In this way, we can prove authenticity. However, that's not good enough, because you'll notice the public keys and the signatures are both on the same site. PGP addresses this by establishing trust, which is done by having people from other places that trust them signing the original key with their keys.

That means that, if you're using PGP to verify PuTTY's authenticity, which many people who are serious about security are, a hacker can't forge an executable that would trustworthy without either (a) stealing the private key, which isn't stored on that server, or (b) hacking the server, replacing the files, checksums, signatures, and keys, and then stealing a significant number of private keys to establish trust for that one private key. Either scenario is basically impossible (or, at least, highly implausible); even if the single private key were stolen, the authors could simply revoke it, which would dissolve the entire chain of trust, etc, which they could then set up again without too much trouble.

RSA simply uses numbers too large to calculate in any reasonable amount of time; current estimates suggest that there's not enough entrophy in the universe to reverse-engineer a private key, so unless it's stolen, it's pretty secure. Coupled with the ability to establish trust, it's a way of achieving very high confidence that the files have not been maliciously tampered with.

Not the answer you're looking for? Browse other questions tagged windows digital-signature integrity or ask your own question.

6
How could disabling 'Hide File Extensions' in Windows make a system more secure?
0
Can a signed downloaded file be securely verified if you only control the private key and the download/verification algorithm?
0
Sample attack scenarios on file downloads over HTTP
3
How can I check the integrity of a Bitcoin tarball with GPG?
0
Can an OS .iso downloaded from Microsoft.com be compromised after the download?