In message signing, is the digest encrypted with a generated symmetric key or with the sender's private key?

I would like to understand the exact order of things for message signing. Mostly, something that looks like this, but for signatures.

I understand it may vary by protocol, and if so, describing the exact way a particular protocol would still be a good answer if you can also list at least a few pros/cons of doing it that way, verses any other protocol's strategy.

Within that, my main confusion point is:

In message signing, there is no encryption. Otherwise we would call it encryption.

A signature algorithm is, nominally, the combination of three sub-algorithms:

The signature generation and verification algorithms are supposed to be able to process messages of arbitrary length, possibly gigabytes. And they do. Existing signature algorithms are already very efficient at handling huge inputs. So there is no problem which would require some additional construction, contrary to asymmetric encryption where something else is needed to cope with the severe limitations of these algorithms.

Ultimately this is a matter of terminology. In the case of asymmetric encryption, e.g. RSA, it is traditional to talk about "the encryption algorithm" as using only a short input; and any extra symmetric encryption layer is considered to be, indeed, some extra, outside layer. However, in the case of digital signatures, the same tradition holds that the initial hashing step is part of what we call the "signature algorithm".

There are some good reasons for this terminology choice; in particular, we want the hash function to be part of what we call the "signature algorithm" because using a signature algorithm like RSA or ECDSA without a hashing step (using a "short input" directly with no hashing) may induce severe weaknesses. However, at its core, it still is a terminology issue. 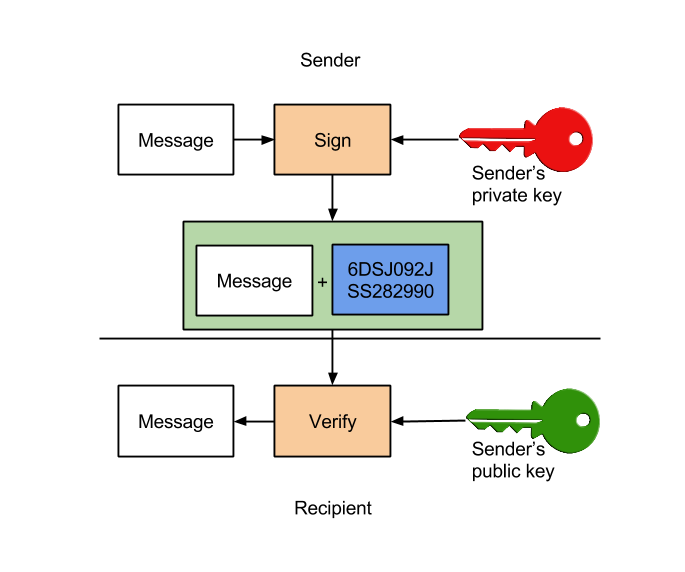 The data is first hashed so that a unique representation of that data is generated, and the digital signature of that hash is computationally cheap. Generally the signing of the hash only applies to the key exchange to ensure that everything was received and sent correctly by both parties.

Generally each individual message is verified using an HMAC algorithm. This is on the order of symmetric encryption/decryption speeds so that the CPU doesn't get overworked.

If you want non repudiation and identification security properties valid also in legal cause the sender have to sign the digest with the private key that has to be valid at the sign time by Certification Authority.

If these properties are not necessary, a symmetric key, with adequate length for robustness, can be used to encrypt the digest and, if the key exchange phase is been done in privacy, it is enough to provide only integrity of the message because there's any possibility to proof that the message comes from a specific peer.

Not the answer you're looking for? Browse other questions tagged digital-signature asymmetric or ask your own question.

6
Could RSA be used as a block cipher?