A TLS client appears to be failing to negotiate when the server hands over a 127-byte pubkey in the DHE_RSA Server Key Exchange message, but succeeding when it hands over a 128-byte pubkey. What's the deal with pubkey length, and specifically, is this legitimate behavior on the server's part?

Looking at packet captures, the failures all seem to coincide with a "Pubkey Length" of 127 in the Server Key Exchange handshake:

On the other hand, every successful negotiation with this client has involved a "Pubkey Length" of 128 in the Server Key Exchange handshake:

Whenever the server sends the 127-byte version, the client responds with a FIN/ACK instead of the Client Key Exchange. The conclusion we've come to is that the 127-byte pubkey length is not acceptable to the client. I've read RFC 5246 to see if I can get an idea for what's allowed and they're not helpful (to me, at least!):

So the specific questions are:

The server in question is an F5 load balancer running an up-to-date (11.6) software, so it's not only off-the-shelf but off-a-reasonably-high-shelf when it comes to TLS provenance. That's not to say it can't be the issue, just to say that it's not like I'm rolling my own Lua-over-Django-with-third-Rails TLS server in the backend :)

I left a script using openssl s_client to hit the server every minute over the weekend, and captured full packets, so that I could see what OpenSSL thinks of this particular server configuration. And simply put, with a 127-byte DHE "Pubkey" length, OpenSSL considers the "Server Temp Key" 1024-bit.

Here's the Server Key Exchange as displayed in Wireshark: 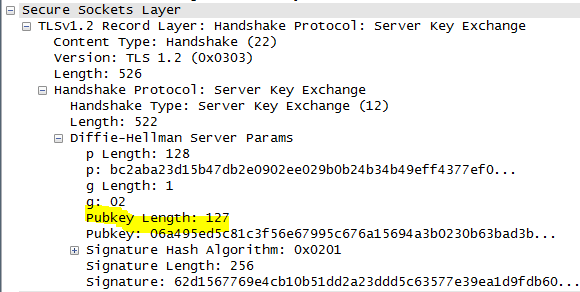 And here's the OpenSSL output for that connection:

So is it 1024 or 1016 bit? Does the 'p' length indicate key strength instead of the Pubkey Length (ssl.handshake.ys_len for those following along in Wireshark)? Where is "Server Key Exchange" for Diffie-Hellman defined? Someone found enough documentation to write a Wireshark parser, if I could look at the doco they used maybe I'd better understand the expectations around these fields.

The "key length" is the size of the prime p. In all your cases, p lies between 21023 and 21024, so it is a "1024-bit integer" and this is the size of the DH key pair. Now, the "public key" itself is the integer y which lies between 1 and p-1; in particular, nothing forces y to be larger than 21023, and this is not a problem. The "pubkey length" field is the size, in bytes, of the encoded value y (in big-endian unsigned notation). Depending on the exact value of p, it is expected that between 1/256th and 1/128th of all DH public keys will need only 127 bytes for their encoding. In your last example, the value y is encoded over 127 bytes, the first one being 06, which implies that y is technically a 1011-bit integer; the DH key length is still 1024 bits since that is the size of p.

Thus, the "pubkey length" relates to the public key length as in "length of the encoding of y", but NOT as in "length that tells whether the key can be broken by powerful attackers".

Apparently, some system in your setup (the client, or some router/firewall in between the client and server -- maybe the FIN you observe on the server is not sent by the client itself) is confused and fails to distinguish the two notions of "pubkey length". Configuring your F5 to use a larger modulus for DH may work around the problem, and could be considered as a good idea anyway (1024-bit DH is not yet breakable, but theoretically you would like to use 1024-bit DH no more than you would accept to use 1024-bit RSA).

I just wanted to sum up the current state on this issue:

The length of the public key is dependent on the value of the prime field. I'd guess that indeed the key size is smaller than 128 bytes / 1024 bits. That means that there is something wrong with the software on the server.

In principle any sized prime can be used for Diffie-Hellman; in the end the value will be used as a number. Using a 127 byte / 1016 bit key however does have some problems:

I'd however first contact the organization that programmed the server. Even if a 1016 bit key size is not directly a problem, it may be an indication of more serious problems.