Did scammers take control of a subdomain to host phishing site?

This morning I received a text message (ostensibly) from my bank:

We need to contact you. Please visit https://paymentassistance.nationwide.co.uk for more information

My spidey sense immediately tingled. I've never received an SMS from my bank before, and when they email me they always use my name and post code. However nationwide.co.uk is the correct domain for my bank. Out of curiosity (and with a healthy scepticism) I typed the URL on my computer.

Is it a phishing site?

If this is phishing, I don't understand:

It looks like this page has been running since at least January 2014:

The Twitter user asked the bank about it, but they didn't reply.

By the looks of things, assuming that the link you've provided is correct, they didn't.

By using the Nationwide website (as accessed by typing in the domain name manually, to preclude any similar character attacks), and using the search function (http://www.nationwide.co.uk/search?term=payment%20assistance), that subdomain showed up in the list of results. 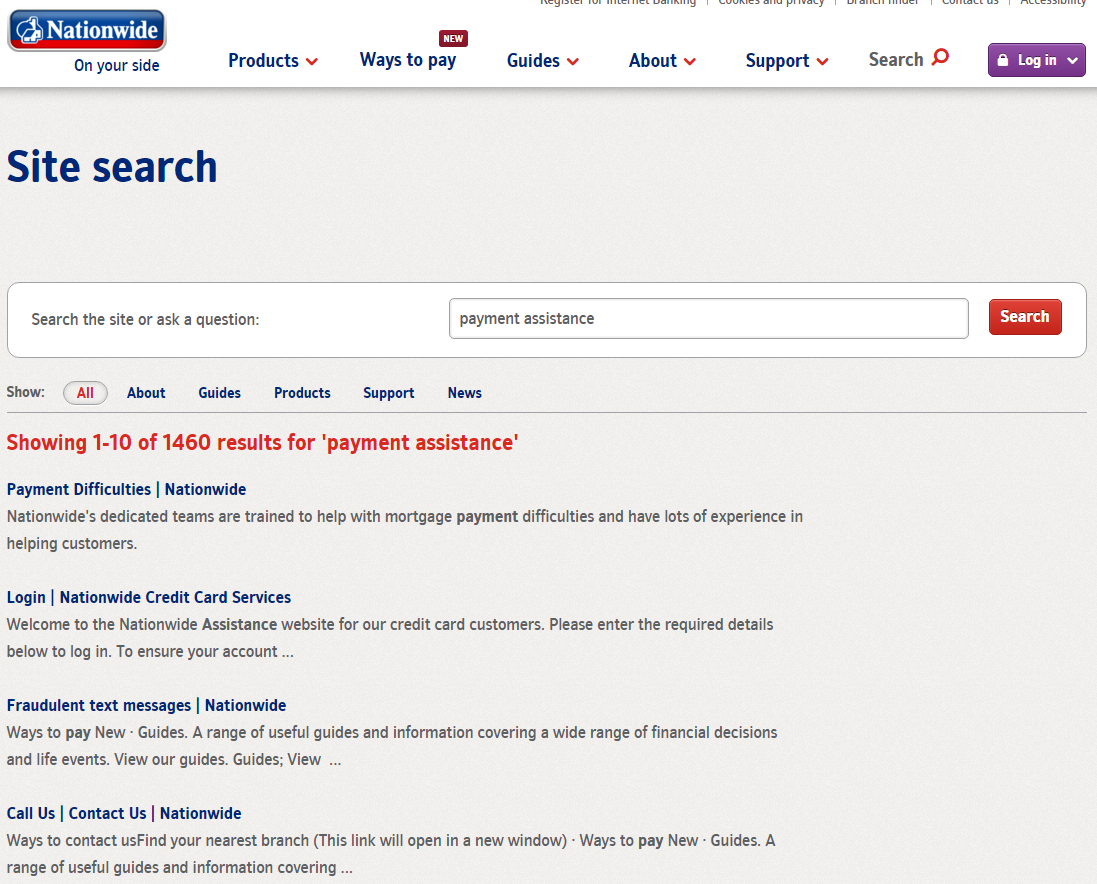 The link for the second result is https://paymentassistance.nationwide.co.uk/

The general approach when it comes to things like this is to do this - search and check that the address you are using is correct (if you have paperwork from the organisation with the address on, even better). Type it in, rather than following the link, just in case. If they have a search engine, look for whatever is suspicious, and if it turns up, chances are, it's legitimate. You can also try phoning them, or popping into your local branch, in the case of a bank, to verify this.

Additional informationI contacted Nationwide via their online banking contact section, and got the following response:

Completely understand how this could cause you some concern.

Don't worry, this is a genuine Nationwide website.  This is from our Credit Card Services as they're most likely wanting to double check a payment with you.  It's completely safe for you to go ahead and complete this.

If you're a little uneasy about completing this online, please can I ask that you give our Credit Card Services a call directly.

If you are still concerned, I suggest contacting then in this way!

I'm skeptical that paymentassistance.nationwide.co.uk is a legitimate* site operated by Nationwide Building Society (the operators of nationwide.co.uk).

It's possible that Nationwide Building Society could have outsourced the hosting of paymentassistance.nationwide.co.uk to Equinix Limited, but it would be surprising given that they are hosting nationwide.co.uk using their own IP space.

If in fact paymentassistance.nationwide.co.uk is a rogue site, it's curious how the people running this site managed to get control of this hostname, and how they were able to get a valid certificate for this site - as you pose in your question. Of course, any answer to these questions is conjecture, but one possibility is that it could have been an inside job by an employee at Nationwide Building Society, or the attacker could have had help from an employee at Nationwide. Or, an attacker could have gained access to the DNS for nationwide.co.uk (perhaps through a social engineering type of attack on a sysadmin at Nationwide, or perhaps by gaining control of a sysadmin's computer) - and hence the attacker could have created the paymentassistance.nationwide.co.uk and gotten a domain-validated SSL certificate for this hostname. OR, paymentassistance.nationwide.co.uk could simply be operated by a subcontractor of Nationwide Building Society, as NReilingh astutely pointed out in his comment.

Not the answer you're looking for? Browse other questions tagged certificates phishing dns-domain or ask your own question.

24
"Phishing" red flags and countermeasures
0
Phishing email sent to me within a few hours after a related incident, what should I do?
5
One Time Password via Text Message: Possible exploits?
5
What to do when iPhone is successfully phished
1
Unexpected phishing attempt by SMS
13
Bank of America phishing site
0
Is this email from DigiCert about SSL certificates genuine?
0
What's the payload of this phishing campaign (which I clicked)?