I've downloaded a .wmv file using P2P. Attempting to play it with Media Player Classic (K-Lite Codec Pack) only gave me a green square in the playback window:

I noticed that the video came with a readme file, however; I found the following inside:

This video has been encoded using the latest DivX+ software, if you are having trouble playing this video please try windows media player Media Player should automatically update any out dated codecs

Since the K-Lite Codec Pack is my media software of choice, I decided to visit their site to see if there was an upgrade available. Indeed, the latest version at the moment of writing was released on November 19th 2015 (the version I was using had been installed on my PC at the beginning of November because I'd bought a new hard drive and reinstalled the OS). I've downloaded and installed the update, but nothing changed, I still got the same green square.

Now, this part I am ashamed of; instead of getting suspicious, I did what the file suggested, i.e. ran it in WMP, which indeed suggested that I download some codecs. I let it do it, typed the admin password because my account is a regular one, and then a few interesting things happened.

15/11/22 3:35:35 PM Real-time file system protection file C:\Users\admin\AppData\Local\Microsoft\Windows\INetCache\IE\51L9SWGF\VOPackage1.exe a variant of Win32/Adware.ConvertAd.ACN application cleaned by deleting (after the next restart) - quarantined desktop\admin Event occurred on a new file created by the application: C:\Users\admin\AppData\Local\Temp\beeibedcid.exe.

beeibedcid.exe had been running as a process before I killed it manually using the task manager. Even though ESET didn't touch it, it's no longer in AppData\Local\Temp.

Upon closer inspection, I realized that the prompt WMP opens to allow me to "update my codecs" doesn't look like a WMP component: 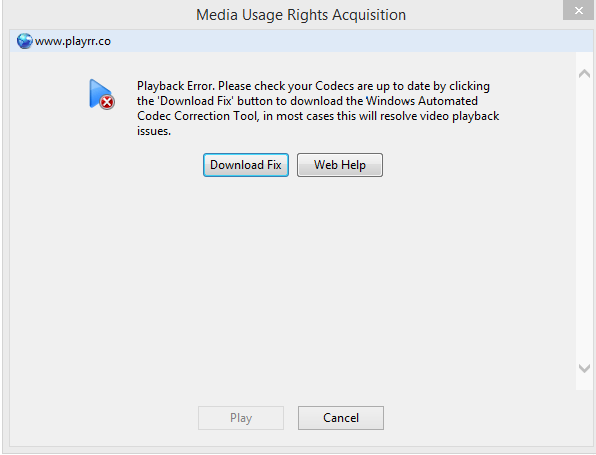 The UI differs in certain subtle ways, and the sentence composition/syntax is poor. Undeniably though the most suspicious thing is the domain in the upper left corner, playrr.co; a simple whois lookup reveals that the domain has been registered on November 17th this year - five days ago - and the registrant is WhoisGuard, so the actual registrant clearly wanted to conceal their details.

Note that clicking both "Download Fix" and "Web Help" has the same effect; the following IE download prompt pops up: 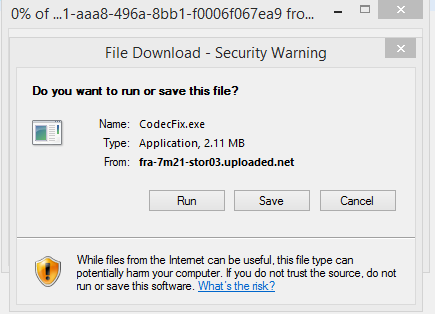 I'm annoyed at myself because this is a fairly obvious trap, but at the same time I'd never think to check Windows Media Player dialogs for obvious trojan/adware!

Thanks for your time.

This video file uses (well, abuses) Windows Media Player's DRM functionalities which allows content providers to embed an URL in their protected content that will be displayed in a Windows Media Player window to allow the user acquire a license to play the content. Its legitimate usage goes like this :

In this case, the feature has been abused to display a fake WMP error about missing codecs (it's in reality a webpage, as the domain name in the top bar suggests, and if it was real the window would've been much smaller) to make you click a (fake) button that points to malware masquerading as codecs.

There's some more info about this DRM system on Wikipedia, and it seems to be deprecated in favour of PlayReady. Whether this new iteration will allow such abuse isn't yet known.

Not the answer you're looking for? Browse other questions tagged windows virus or ask your own question.

21
Is VLC on Linux vulnerable to an attack from .wmv files designed to install viruses?
1
codecfix.exe virus and VLC Player and Windows 7

3
How does Remote Access Trojan / Backdoor Software work?
1
Recovering From Suspected MPEG Malware Attack
2
Antivirus monitoring activity: why do they not have an internal firewall to prevent processes' access to user's documents?
2
Is it possible that an unofficial download of Windows is corrupted?
1
Show confirmation popup before running any downloaded program in Windows 10
1
Is Deluge safe to use still when it's not been updated since the first part of 2017?