How to determine if JPG EXIF data has been changed by "OEM" software (without third party tools)?

I have a JPG and I am analyzing it to determine it's efficacy. The image metadata clearly indicates that the image was digitized at 15:10:13, Dec 31, 2015 and I need to determine if this date digitized has been altered in any way.

I cannot replicated the alleged modification. Here is what I have tried:

From what I have tried, I conclude that the date digitized is indeed valid however there is reason to believe it is not and we need to determine how it could have changed (within my parameters -ie no third party app or person).

How could the EXIF data have be changed automatically, specifically the "DateTime Digitized/Original" data? Is it likely that it can be changed via iMessage, Apple, the IOS, or the Iphone(s) at all?

I have included a snapshot of the EXIF data (from Apple's more visually pleasing inspector tool, the actual forensic examination shows the same thing in binary. 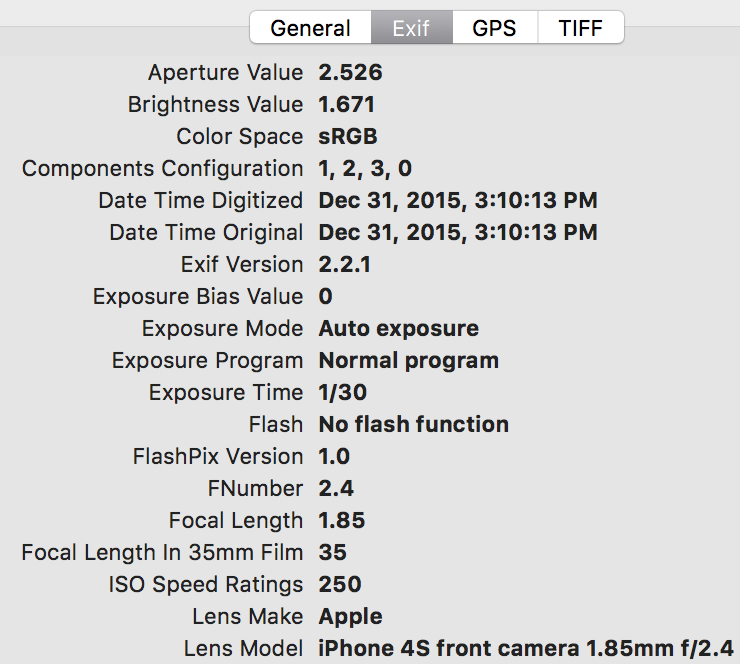 This could be due to many reasons. I'll share the most likely:

This is an idea but there shouldn't be any EXIF data on here if the picture 'started out' as an SMS picture...

Notice that this is from the iPhone 4. The iPhone 6S is the current phone. Things have changed. Your link is from nearly 4 years ago. Updates can add or remove features, even on older devices such as the iPhone 4s, your target machine.

Since we are talking about forensics, you might be working in law enforcement. If this is the case, then you should try to get a hold of an updated iPhone 4s. Take a picture of anything, and use iMessage to send it to another one of your devices. Verify that the EXIF data is either intact or missing. From there, you should be pointed in the right direction.

If you have already seized the iPhone in question, and you found the EXIF data on the iPhone, it's possible it didn't get transmitted via SMS. If you got the EXIF data from a phone that received the SMS, then you'll know it can be transmitted.

The article I linked seems to suggest that EXIF data is now included by default. Many other articles indexed by Google also suggest the same.

Any app that has permissions to view and edit photos or access the file system where the photos are stored could change this data. EXIF data, modify/access/created times, etc are not immutable.

It will always be speculative how it could be changed or if a third party app (e.g., another photography app beyond the stock app) added EXIF data when it was not expected to be added. As @Mark Buffalo noted in this answer, there are so many places along the line or factors that could impact the presence or changes to metadata. Unless you are dealing with signed and timestamped information, you do not have any reasonable assurance over the provenance of data.

Not the answer you're looking for? Browse other questions tagged forensics steganography or ask your own question.

26
Techniques for ensuring verifiability of event log files
9
How do I forensically determine whether a mobile phone has been infected with a spy suite?
2
Is there an example of a web server that does steganographic watermarking?
41
Can you recover original data from a screenshot that has been 'blacked out'?
38
How is it possible to embed executable code in an image
4
Identifying EXIF Tampering
3
steganography - digital application?
2
Does corrupting several bytes of an encrypted zip make it unrecoverable?
0
File carving JPG exif data files
102
Why is this 435 × 652 pixel JPEG over 6 MB?