A seemingly innocent program is attempting to connect online. Should I be worried?

Straight to the point: Solitaire just tried to connect to the internet.

Details: After tightening my firewall rules after a RAT was installed by my friend (who then proceeded to unendingly open John Cena's theme song), I noticed Solitaire trying to connect to 40.122.214.188 which is owned by Microsoft and is part of the Xbox network. The problem is, I never even played any built-in games on my unit. I've never played Microsoft's Solitaire so outbound sync is out of the question. I don't use an Xbox. I also can't find any scheduled task for it. The system is completely clean when this happened.

Also, it seems to be in a suspended state, but still up.

The executable is located in

Should I allow it? 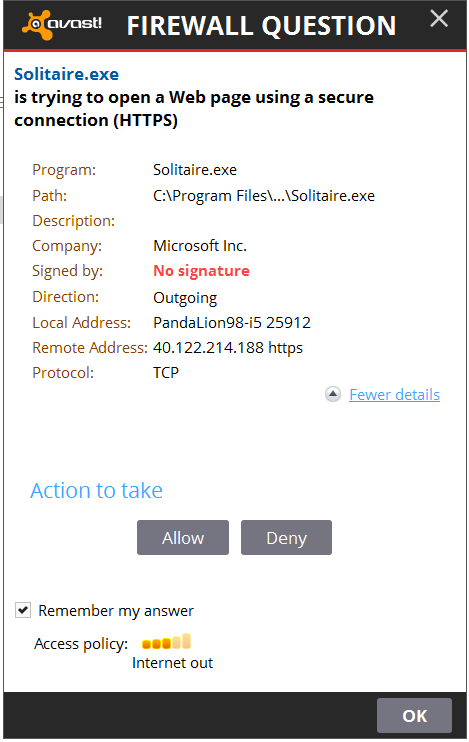 If you don't plan on ever playing Solitaire on your machine, why allow it through the firewall? You can always reverse your decision later if you decide to become a Solitaire fanatic, but until then it's safer to just deny Solitaire access.

I know it looks legit and it almost certainly is the application trying to connect with the Microsoft network to collect statistics, but who knows? In a year or so the Solitaire game could be found with a major security hole, and then you'll be glad you kept it denied under the firewall. The tiniest slightest risk isn't worth it if you never plan to play the game.

Not the answer you're looking for? Browse other questions tagged network windows firewalls internet microsoft or ask your own question.

8
Firewall says that a program that I'm developing is trying to connect to the Internet
2
Regedit shows strange chinese characters in my system - should I be worried?
7
When TrueCrypt prompts to re-enable automatic mounting, should I be worried?
1
WebDAV automatically attempting to connect remotely because of DFS namespace?
2
In Windows, what should I do to run a program with admin rights without concerns?
4
Should I be worried about rootkits?
1
Should organisations allow their employees connect with a VPN software from their own laptops to their machine at work?