I have seen several offices with electric locks for entry that have a sensor for exit. I assume it's some kind of motion or object detection sensor. 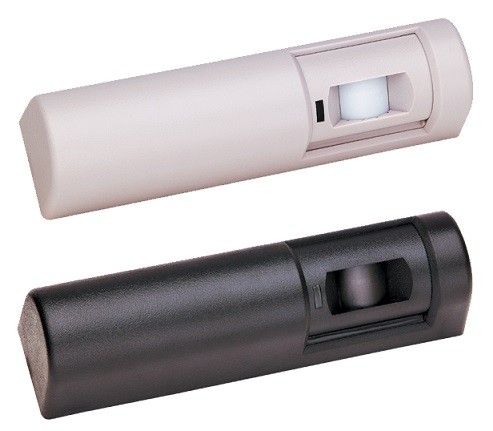 This is odd because in many cases, there's a seam between the door it is monitoring and the other door or wall. What does that sensor actually do, and how does it prevent someone from pushing a small thing in the crack and changing it to (try to) trick the sensor?

I once tried poking a piece of cardboard on a stick through the seam, turning it sideways, and waving it around. That didn't work, which is a good sign, but maybe my stick just wasn't long enough. I'm still concerned about the security of these systems.

What does that sensor actually do, and how does it prevent someone from pushing a small thing in the crack and changing it to (try to) trick the sensor?

This sensor is called a REX or Request to Exit. The sensor is meant to allow people to leave an area without having to badge or authenticate leaving the area. Your question is good because the idea of pushing something through and attempting to trigger the REX is something that has been accounted for. The devices can be configured to only test a certain range, such as 4 feet from the top of the door.

The combination of having a properly configured REX as well as IR sensors in the REX reduces the likelihood of a vulnerability and increases the odds that the door can only be opened when someone is on the inside attempting to leave.

Be forewarned, electric locks and door exits are part of building codes and I would advise to seek a experienced professional or architect to assist in any questions or concerns you may have with your particular installation/operation.

The request to exit device may not even be necessary or necessary to unlock the electric hardware unless you are using a maglock which in my opinion should be avoided when feasibly possible especially if the doorway has a exit sign above the door. The request to exit device in my opinion is primarily used to notify the access control system that someone is exiting versus forcing their way in without using a card reader or similar electronic security device to gain valid entry. But if using a maglock the request to exit device is now more importantly used to additionally release the maglock in a false safe manner and independent of anything else such as a access control system.

Therefore why even have the request to exit device trigger the access control panel to unlock the electric lock if you are not even using a maglock. Maglocks or similar electric locks generally require additional fire safety and life safety devices break electrical connections in order to exit. With electric strikes, electric trim levers, and electric latch retraction you could use mechanical operations to exit such as found in panic bars and door handles while only using the electrical operation of the lock when needing to enter. Most access control systems have the request to exit feature trigger the unlock operation of the electric lock by default but will let you change it in programming so that that feature only validates that the door maybe opened while exiting without triggering the unlocking of the electric lock. In my opinion the access control manufactures should have the request to exit device not trigger their unlock procedure by default and only validate the door about to be opened.

I should also mention that there are other types of request to exit devices that seem to detect better than motion detectors without the problem posed in this discussion but may not be as durable/reliable or as easy to install/maintain. Request to exit devices that use micro switches built in to panic bars and door handles or other mechanisms that require direct movement/touch will avoid the common problem I have commonly ran into which is false forced entry alarms on card access systems.

But my guess is that the original poster has one or two of those heavy glass doors using a maglock for electronic access in place of or in addition to the original key cylinder at the bottom of the door to throw a bolt into the floor or maybe something along those lines. In those cases it seems you realistically can't avoid using anything but a motion detector as your primary "no prior knowledge" device and a push button with 30 second timer as your secondary "back up" device in addition to having the maglock release during a fire.

9
Using RFID-only on door lock to house?
2
Cheap door logging for home?
24
What are the advantages and disadvantages of different types of motion sensors?
7
Should magnetic locks automatically release in the event of a fire alarm?
3
Door locks & deadbolt appropriate for exterior office door with decorative glass next to it
2
Loss of physical locks/password to safes
12
Can motion sensors be disabled by lasers without triggering the alarm?
3
Do dial locks have repeated numbers?
1
Physical mechanical examples of “M-of-N” locks?