I have, on multiple occasions, received this email from Twitter: 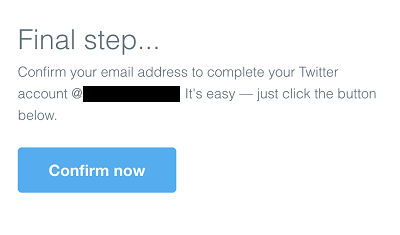 Since I have received it multiple times either this person clearly thinks the email is theirs or it's spelled similarly, something to that nature.

If I were to confirm the account, and the person were to start using it, wouldn't I essentially have a "backdoor/trojan horse" of sorts where I could simply reset the password and take control of the account whenever I felt like it? What if it were a bank account instead of a Twitter account, it could have more sinister repercussions.

Other than it being an attack based on pure chance, you can't force someone to try to use your email, is it a viable attack? Is there a term for this kind of attack?

If I were to confirm the account, and the person were to start using it, wouldn't I essentially have a "trojan horse" of sorts where I could simply reset the password and take control of the account whenever I felt like it?

Given that they are not using 2-factor authentication, yes (though I don't think "trojan horse" is the correct term). They would be able to start using the account when it is confirmed, but you would have the ability to reset the password, and then log in as them.

Not the answer you're looking for? Browse other questions tagged email attacks or ask your own question.