How is WhatsApp sending end-to-end encrypted messages in push notifications?

How is it possible for WhatsApp to send push notifications with message contents to the Apple Push Notification service?

One possible solution would be to send the unencrypted message to APNs from within the app itself but this would be open to abuse and would defeat the purpose of end-to-end encryption.

Update:
I have just tested it a bit more, according to Apple's documentation:

Which I tested, and resulted in me still receiving the plain text push notifications. This would lead me to believe the app is not running in the background to decrypt any notifications received and then repost them.

I have now used the VoIP API ( as mentioned in the answers below ) to effectively achieve the same result myself in a demo app. Works very well.

Apple no longer allows the usage of the API for push notifications of non-VOIP apps. They do however allow WhatsApp to do it in their infinite fairness.

A notification application extension can now be used to decrypt push notifications. However, dynamic libraries are discouraged from use in such extensions so you must have a codebase that can be compiled statically for decryption etc.

WhatsApp could be using VOIP background mode along with PushKit for solving this problem.

For details refer to Voice Over IP (VoIP) Best Practices

Once the encrypted payload of VOIP push is decrypted they show a “Local Notification” with the decrypted message.

There is one small issue though, PushKit is available only on iOS 8 and later. So, how is Whatsapp doing it for earlier versions of iOS? Well, it isn’t. They don’t allow you to see message preview in notifications on versions earlier that iOS 8 (Verified it on iOS 7, see screenshot) 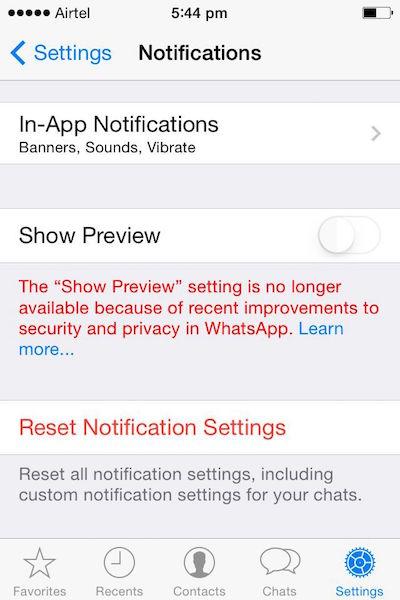 On Android the two are totally different. First one is called Notification, the second one is called Message or Downstream Message.

But back on iOS the application can generate Local Notifications that will show in your notification center. These don't need to be triggered by any remote notification, it's up to the logic in the app to do it and iOS apps do have the possibility to perform background tasks and sync that can generate these notifications.
Since iOS7, an iOS application can also perform HTTP operations in background for unlimited time (because the application is delegating the network transfer to the system, that will awake the app for a limited amount of time when the transfer is finished).

Not the answer you're looking for? Browse other questions tagged encryption aes whatsapp or ask your own question.

5
Wasn't WhatsApp messages already encrypted?
19
Can governments intercept end-to-end encrypted Whatsapp communication through lawful interception?
8
Given properly implemented end-to-end encryption with no backdoors, can whatsapp comply to hand over customer messages?
5
Should the Payload of Push Notification also be encrypted?