What will I get if I "decrypt" a plaintext?

If an encrypted text is decrypted with its corresponding key, we would get the plaintext. However, what if I were to decrypt plain text? What would result? An error or some nonsensical number?

"Encryption" is a large term. In all generality, encryption takes an input message in some space of possible input messages; usually arbitrary "sequences of bits" with various restrictions on length, e.g. "length in bits must be a multiple of 8" (i.e. input must be a sequence of bytes), or "length must not exceed 245 bytes" (typical of asymmetric encryption with RSA in PKCS#1 v1.5 mode, with a 2048-bit RSA key). The output is al part of some space of possible output messages.

When you can "decrypt a plaintext", what happens depends on the encryption system. Usually, when decryption works at all, what you get is essentially random-looking nonsense. In some cases, encryption is an involution (e.g. stream ciphers such as RC4 that work by XORing the message with a key-dependent stream), meaning that decryption and encryption are actually the same operation, so by "decrypting" the plaintext you are actually encrypting it.

However, it may also happen that not all sequences of bits of the right length are valid ciphertexts. For instance, consider a block cipher in CBC mode. To encrypt a message m, you must:

In such a case, when decrypting, not only must the length be a non-zero multiple of the block size, but after decryption, a valid padding must be found. If using the usual "PKCS#7 padding" (when adding k bytes, all added bytes have value exactly k), the probability that a plaintext of a compatible length actually decrypts to something with a valid padding is about 1/255. In that case, "decrypting the plaintext" will produce a decryption error 99.61% of the time, and some random-looking junk the remaining 0.39%.

Good encryption system include a MAC, in which case attempting to decrypt something which was not the result of encryption with the same key should result in a duly reported decryption error with overwhelming probability.

Summary: when you try to do something that does not make sense, you can obtain various results.

It depends on what cipher you use. For example, with the famous and very secure (sarcasm) ROT13 algorithm, encryption and decryption are the same operation. If you decrypt a plaintext, actually, you just encrypted it.

With a more modern cipher like AES, you will likely get a big nonsensical number. I think it will be the same for most ciphers.

So, broadly speaking, if you apply the "decrypt" algorithm to a plaintext, you'll get a ciphertext encrypted with the decrypt algorithm.

This may not always work of course, depending on the encryption scheme. You might get back an error when you try this. I don't believe this would work with the RSA algorithm for instance.

Whether applying "encrypt" to this ciphertext would get you the plaintext back would depend on the encryption scheme.

For example, War and Peace might suddenly cause your PC to morph into the reincarnation of a Cyborg zombie Hitler because it's really the 1000 times encrypted Mein Kampf. Meanwhile, decrypting The Bible might bring about an actual Raptor Jesus due to the sheer belief of The Internets in Him.

The more likely scenarios are that you would cause some kind of physics meltdown in your computer, possibly releasing spurious particles or waves, like neutrons, Bogons, or Morons. We don't need waves of spurious Morons!

Absolute worst case scenario: your computer divides by zero and your house ends up looking like this: 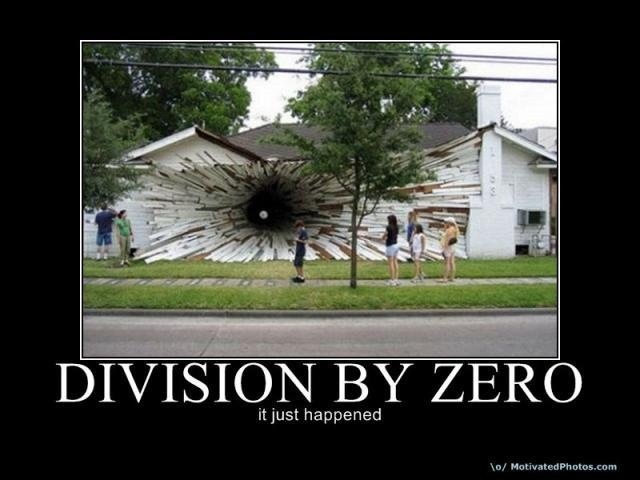 If you could not tell, this was a bit of humor to address the question at face value, and the preceding is not to be taken seriously. Like others have said, there are a lot of variables at play, namely the type of encryption/decryption and specific methods and algorithms used. If you put plain text into a decryption function, in all seriousness, you'll likely get some kind of gibberish out.

However, it is possible to make an algorithm or function to obscure a message in plain text that could be decrypted into another plain text message. However, that would just be another form of encryption and would more likely encrypt words instead of characters. In this case words like English words instead of the computer science words.

But the result would be some funny looking characters because the decryption process will treat your plaintext as encrypted data and try to decrypt it with a provided key.

Not the answer you're looking for? Browse other questions tagged decryption or ask your own question.

1
Decrypt signature file based on plaintext
2
Decrypt files in safe environment
2
Why is the first line of http message unreadable after decryption
2
Looking for a (simple) utility to decrypt rsa-encrypted text in Windows?
3
DES Decryption followed by Encryption, will it produce the original text?
1
security of AES where attacker can ask secure code to decrypt arbitrary cypher-text