Do the most common ransomware programs delete the original files as they go, or in a big bulk delete at the very end?

I'm talking about the most common varieties like Cryptolocker, Cryptowall, Torrentlocker, KeRanger, RSA4096, etc. (There is not necessarily a need to answer for all of these, one or two may do.) If the most widespread ones differ, answers can be divided into a section for each program or category.

Do they A: Create an encrypted copy of a file, then delete the original of that file, then go on to the next one, etc?

Or do they B: Create encrypted copies of all of your files in one bulk operation, and then do one large deleting operation at the very end?

When they delete, do they also overwrite the relevant sectors on the drive? (This takes time.) This, though, would be to thoroughly prevent any given file from being recoverable by software like Recuva and Photorec.

Since the ransomware wants to remain hidden until it is completely done with its work, it wants to be stealthy and give off as few signs as possible of its existence.

From the ransomware's author's point of view, the disadvantage of A would be that if the user tries to access their files during operation, they can notice that their files are gone (or corrupted, if the encrypted files simply replace the originals in the folder hierarchy.) This can mean the ransomware gets discovered or is not allowed to finish its job to demand a ransom.

B, on the other hand, gives the criminals the disadvantage that the original files all remain accessible until the very end. That means that if the user discovers the ransomware during its operation through some other tell, they can easily recover their data.

To repeat the question, how do the most widespread types of ransomware attempt to "solve" this "problem"?

Maybe its not such a big problem for them at all, since most people who get affected may not be alert enough to catch the ransomware mid operation (as in B), or know what do actually do if they notice their files are gone (as in A)?

In addition to Angel's response, As seen in the popular ransomware variations that you mentioned, the encryption is done on a file by file basis where one file is encrypted and then the plain-text version of the file is removed, then the ransomware moves to the next file. It may start parallel threads to encrypt several files but the outcome is the same for our purpose. Let's see how it's done by eda2, Cryptowall and CTB-Locker.

It starts checking drives and directories recursively passing each file that matches its criteria (file extension is in its predefined list) to the EncryptFile method and the file is overwritten with encrypted version of it.

Cryptowall 4
Cryptowall 4 is analyzed by Cisco Talos and this diagram shows its encryption process: 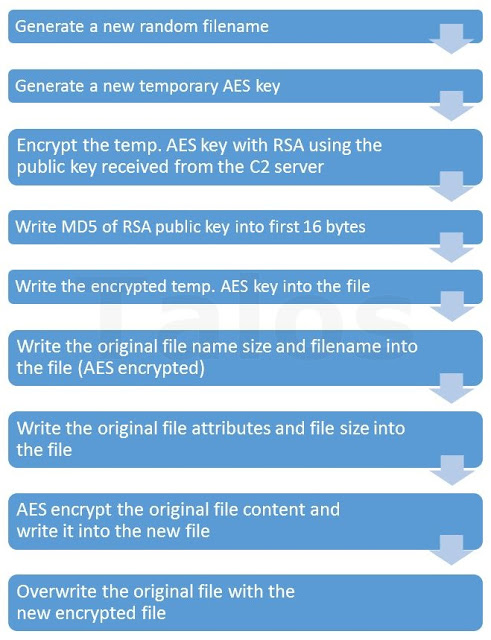 There are separate threads run by this ransomware, one of them is "DoFilesEncryption" thread which does the encryption part.

After iterating through the folders and finding the files:

At this point the real file content encryption takes place, the original file is read in blocks that are 512 KByte chunks. Each block is encrypted with the generated key, using an AES-CBC 256 algorithm, and written directly to the new file (together with the block size in the first four bytes).

CTB-Locker
As analyzed here and kinda same as Cryptowall, there's a thread responsible for encrypting files in which this routine takes place:

Further Thoughts & Wrap Up
As discussed above, files are encrypted on the go and usually overwritten by their encrypted version. Now let's analyze this design. In my opinion, one by one encryption and replacement of files is a superior option.

Now in order to deal with performance issues when encrypting large files, one technique I've seen ransomwares using is encrypting only the first n-bytes of the files. This is usually enough to corrupt most of the files and is much faster than encrypting the whole file. Unfortunately I couldn't find the name of the specific ransomware which used this technique at this very moment.

Ransomwares don't encrypt your whole filesystem, they usually leave executables intact, so the victim has to open up an image, a document or something of that kind to notice there's something wrong.
Even for a computer savvy person who hasn't done some research on ransomwares it may not be clear what's going on, there could be a handful of reasons why a document is corrupted or isn't opening up (Some ransomwares don't change the files' extensions). Adding this to the probability of someone actually noticing that a ransomware is encrypting their files this doesn't seem to be a major concern.

Even if it was a major concern, instead of bulk encryption/deletion, the malware could monitor users activity while staying hidden doing no encryption and once it finds out that the user's inactive/afk it can start the encryption process.

They will mostly be file-by-file. Thus, if you are “lucky”, you may find yourself with only some folders infected. There are several reasons for this:

But perhaps most importantly, it allows them to overwrite in place the files.

Which is important both for anti-forensic and «encryption optimizations».

Instead of copying a 100 MB file, they could eg. open the file, encrypt the first 1 MB and save it to the same location in disk (perhaps appending some ransomware-specific data, too). The user is left with a 100 MB ‘encrypted’ file that the original application is unable to open, but only ~2 MB of I/O transfer were needed.

And when you are attempting to make every document in the disk unavailable, that really matters.

Not the answer you're looking for? Browse other questions tagged malware virus ransomware or ask your own question.

212
What should you do if you catch encryption ransomware mid-operation?
1
Is it possible to recover wannacry encrypted files through file system recovery?

5
What's the attitude of anti-virus vendors toward ransomware?
4
Does typical Ransomware only 'attack' certain folders/filetypes
3
Is there a ransomware variant that checks for file's magic numbers to encrypt?
8
Could ransomware be stalled while encrypting?
20
How to remove quarantined virus securely?
2
Ransomware encryption on opened files
3
Does EFS protect against data theft by ransomware?