I read the following about PKI: 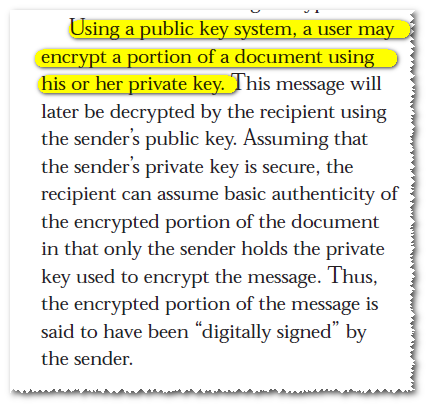 I have a few questions about the following line:

Your text is just very badly written. No wonder you got confused.

a user may encrypt a portion of a document using his or her private key.

Sounds like a badly written description of RSA signing. With RSA signing you essentially encrypt a hash of the message with your private key.

2) You use the senders public key to verify the signature. And since the signature contains a hash of the whole document, you know it hasn't been tampered with.

3) Is a bit unclear. If you decrypt with plain, unpadded RSA, it will succeed for most blocks, and give gibberish. When using padding you'll get a padding failure. But since this is a nonsensical operation, you don't need to think about that.

The way messages are encrypted in a public key system is:

Encrypting the key with the receiver's public key, means that only the owner of the associated private key can decrypt the symmetric key, and thus the message.

Your block of text appears to be aimed at a novice. The last line states the actual result:

Thus, the encrypted portion of the message is said to have been “digitally signed” by the sender.

So question 1. Yes, you sign with a private key and verify the signature with the public key. The actual operation involved is the same. You are "encrypting" the text using a large number. Whether the number is a private key or a public key makes no difference, though there are security gotchas associated with using the wrong key for an operation.

For question 2, you know the message hasn't been altered because only the private key can sign the message. This is the basis of all asymmetric cryptography: one key is held dear, and the other is made public. Through this, you create the characteristic of non-repudiation of sending -- the inability to claim the message was not sent by the holder of the private key. If the private key has been compromised, then all bets are off.

For question 3, the results are implementation-dependent though I suspect you would get gibberish in many cases.

Previous answers are very good, but there's so much confusion in this question that I believe more explanation is always better.

It's used to decrypt data that was encrypted by your public key. Also it can sign anything and people with your public key will be able to verify your identity.

You decrypt with your own private key, they encrypt with your public key. The decryption cannot fail silently, if an output file is here, then it's all good. Implementations may be broken though.

You cannot decrypt with other public keys. If you try with all but the right private key, it will not work. Error indicating incorrect key is the most likely outcome. You could expect weird implementations to still produce an output file with gibberish data though.

4
Can you make a digital signature using the receiver's public key?
1
Help to understand secure connections and encryption using both private/public key in RSA?
3
Expiring AES Key
2
How do key pairs work especially in the context of cryptographic signatures?
0
Asymmetric Encryption + Signature workflow
7
Threema: Are received messages exposed, when sender's private key gets compromised?
0
Why can't we encrypt the message with sender's private key and receiver's public key in case of sending messages through a server?
0
What are the different combinations of public and private keys and what CIA do they provide?