How bot(s) have guessed my wordpress login page?

I have a wordpress site (fully patched) that used to receive many attempts to log in based on dictionary attacks. I changed my admin user to something uncommon and use a really strong password.

For the second time in a month. First time I had a failed attempt and changed url to http://foo.com/blog/?paper and didn't think much about it. Second time happened today. Exact events:

I feel pretty secure as the bot has to guess the login page, the admin user and the pass. However, by reading this site I am a little bit paranoid. So my main question is:

How the bot has "guessed" the paper or pencil login page?

EDIT: To be more clear, attacker hit the login url directly with NO failed attempts on other similar urls. Check here last 404 errors: 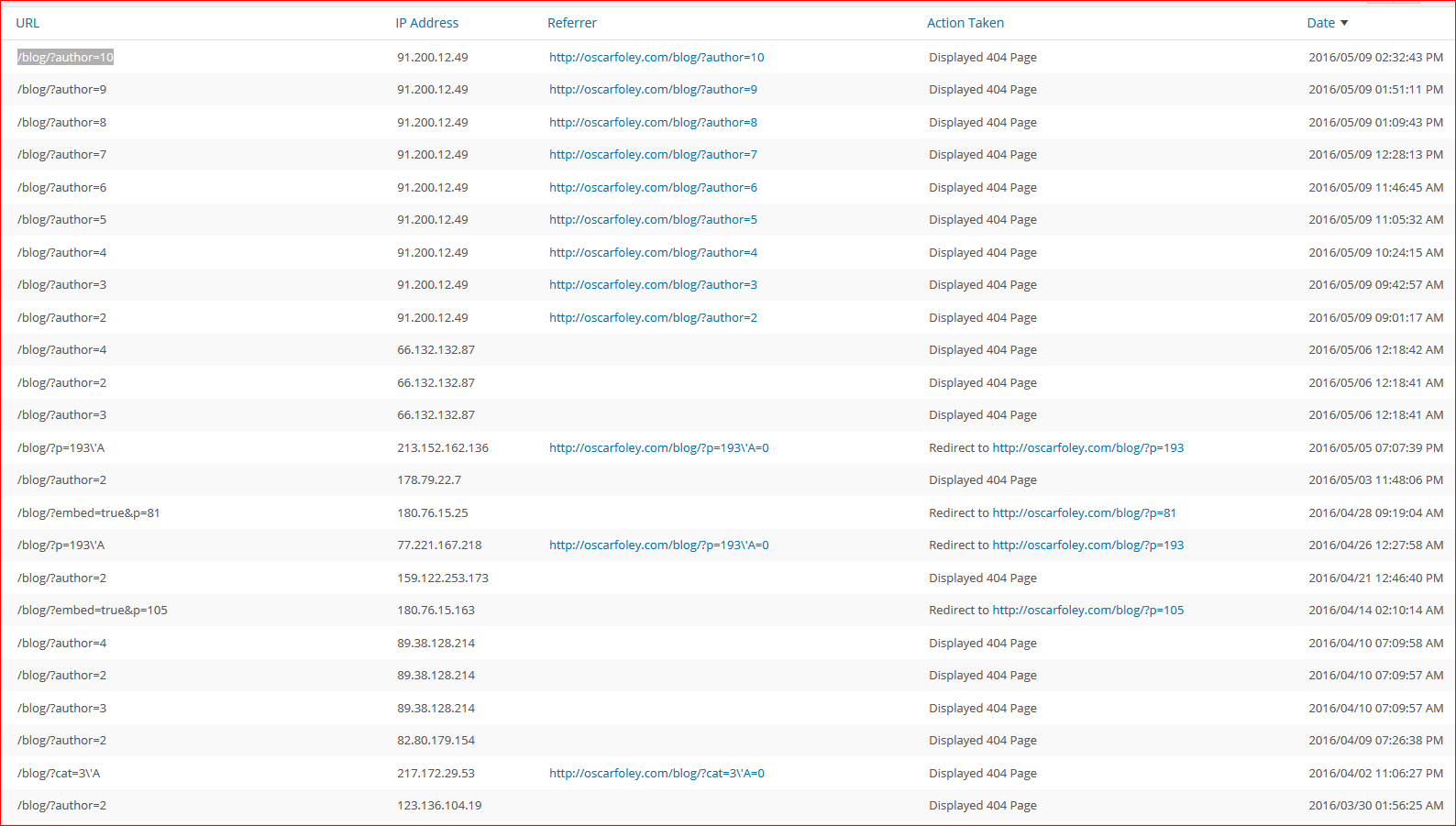 Many web scanning tools (e.g. Wikto) have the capabilities of launching bruteforce guesses against a URL. There is nothing stopping an attacker from using a dictionary and say curl or wget to bruteforce either:

A common task I would do for pentesting, would be something similar to the above, where I would wget a copy of the site, parse out each word, put each word on a newline, then search the site for directories of any word listed on their site. This also came in handy for username a few times.

Now you mention wordpress, and it should be stated that when you use plugins, some of those plugins can contain "pingbacks" or "hey I also use this plugin" where your site would be listed. This could be another vector where an attacker saw your site elsewhere, and targeted it. As for WP in general, sites like "Scritch" can tell someone what is running on the site (CMS), what plugins are in use, etc. So imagine the following: Attacker sees your site on say a pingback, takes the site name, shoves it into scritch. Determines they will attack you. They don't find the login page, so they use a similar tactic (shell script) to find something.

I would worry little about attackers, and focus on creating say a mod_rewrite rule or htaccess file similar to the following:

Where 1.2.3.4 is your home addr, and 5.6.7.8 is perhaps your company page and be done with the worries of someone trying to bruteforce their way in via login page. Another alternative which is security through obscurity would be to create a URL based on say a SHA1 checksum of a word, versus a word. E.g.

Where 2ee681adc62a5ca2865bb7424b6a97a9050ddcd4 becomes your login URL. Again, security through obscurity, but the notion here is that is someone were to guess that URL at some point, you can deduce that your traffic was somehow sniffed, or cached somewhere.

ADDED DUE TO OP EDIT

The 404s from one address mean little to some degree. You have no idea if that address connecting is working in connection with another address doing bruteforce attempts. (e.g. distributed scanning/sharing)

Well, pencil and paper do go together.... so maybe the attacker just guessed after finding

Why not just make it a randomly generated thing using something like pwgen, with a ridiculously large length, like 50, so something like as a login page and login being equally ridiculous?
Share
Improve this answer
answered May 11 '16 at 13:55

your solution is IP-based login page. I.e. you have a list of static IP's, they're allowed to open actual login page, others are redirected to a trap to collect username and password for a break-in attempt + blacklist an attacker's IP. Where from it can be guessing? An answer is... your browser toolbars/addons + antivirus "security software". Yes, they DO leak data. Also your employer's proxy logs may be of suspect. Try a blank Linux installed on a Raspberry Pi 2 with blank browser with no addons - and use it and it ONLY to log in to your wordpress, not use it from your employer's proxy. And take a look - will the new login address be in use.

Not the answer you're looking for? Browse other questions tagged wordpress investigation bot or ask your own question.

7
Brute force login attempt from spoofed IP's
1
How to figure out who is pummeling my WP install with bogus login attempts
2
What attack requests "wp-admin" URLs without login cookies?
7
Are these access.log entries successful wordpress login attempts?
1
Meaning of many failed login into my website
3
How to protect WordPress from brute-force attacks?
13
Bank of America phishing site
1
limit malicious log in attempts on wordpress site
20
Prevent a bot accessing login page with multiple IPs and massive list of username/ passwords