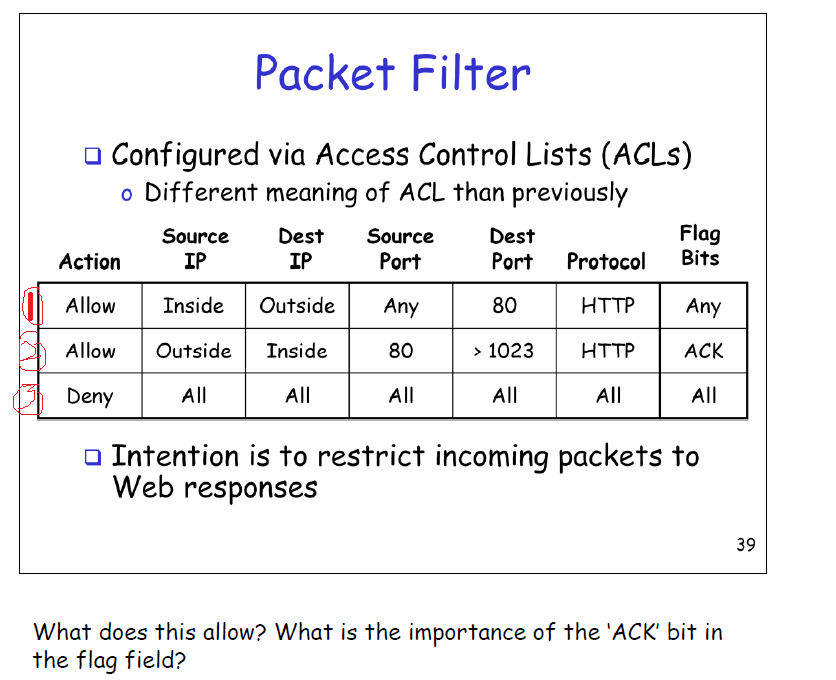 Can anyone explain how to read and understand row 1,2 and 3?

My understanding for row 1 is : If any inside packets want to go to outside via any source port to destination port number 80 using HTTP protocol. It is allowed.

Row 2, if any outside packets want to come in via source port number 80 to destination port number bigger than 1023 using Protocol HTTP. It is allowed

For Row 3, no matter, the action is not allowed.

Is my translation correct? Also, is it usual to have action in row 3 in real life?

Also, what is the importance of the ACK bit in the flag field? Is it to make sure the packet sent out or received?

You are basically correct.

Also, is it usual to have action in row 3 in real life?

Yes, if the intent is to only allow packets to your web server, you have to deny everything else. Many types of ACLs have an "implicit deny," meaning that if the packet doesn't match any ACE, it is denied.

what is the importance of the ACK bit in the flag field?

Why is no state being one of the drawbacks of Packet Filter?

Having state information allows you to enforce TCP protocol rules, which better protects your servers. The disadvantage is when you have multiple paths, you can have asymmetric flows which a stateful device doesn't handle very well.

Perhaps it's just the way your rules were written for this example, but a good practice would be to specify the IP addresess on the inside, instead of a generic range.

Not the answer you're looking for? Browse other questions tagged network firewalls access-control packet network-access-control or ask your own question.

5
How do I configure nmap to verify my firewall is performing stateful packet inspection?
3
Incoming Packet From Source Port 80
1
Attacking a server on port 80 while only port 22 is open on the firewall
1
Is a firewall an access control list?
19
A destructive force can always leak information through HTTP packets. Should I bother configuring outbound rules on my firewall?
0
Stateful Packet Filter structure
1
Firewall Blocking IP Spoofing
0
Thought process behind firewall design
1
tcpdump packets have bad and incorrect checksums on localhost, how to investigate further?
0
Are there any examples of network-based application firewalls?