How secure is the hashing/salting/stretching process as described in this diagram?

I was just brainstorming about the hashing, stretching, salting part of the user password in the authentication process and I want it to be as secure as possible (no matter how paranoid that is).

I came up with something that I described in the diagram shown below. I was wondering if this is a good way to go or that is has some disadvantages or potential risks using this process. 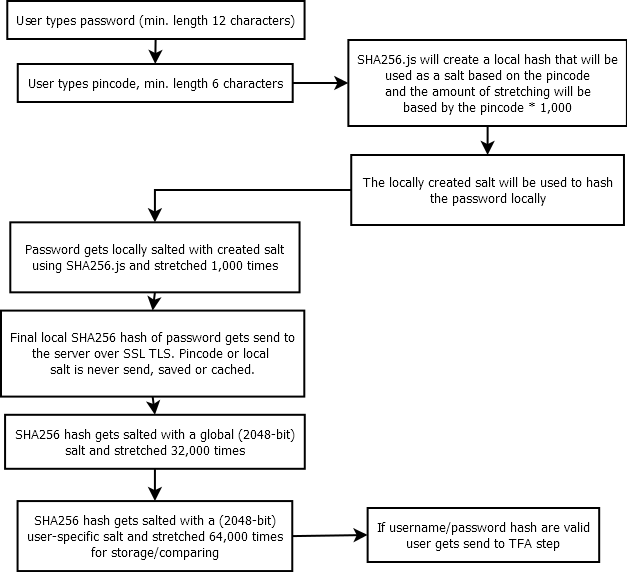 I think the combination of salting and stretching locally based on a pin-code that is never stored but just known by the user makes it harder to guess the salt and also to reproduce the exact process without the user since the local used salt and amount of stretching will be unknown to the server.

Secondly assuming that the connection is compromised because of an MiTM attack. The process of how the leaked hash of the password is created is still unknown because the salt and iterations (based on the pincode) are unknown. The local process (in the browser) can be reversed engineered obviously but assuming the browser and computer aren't infected, just by intercepting the communication, it's not possible to reproduce it (read: very hard to guess).

Secondly assuming that the connection is compromised because of an MiTM attack. The process of how the leaked hash of the password is created is still unknown because the salt and iterations (based on the pincode) are unknown.

In case of a MitM attack (made possible by say incorrect use of TLS) hashing client side will not help you. The attacker could just modify the JavaScript sent to the client so that it sends the password and PIN in clear text. Short of having the user read and verify the complete JavaScript code at every login there is no way to protect your password if an attacker breakes the TLS.

Using a PIN that is "never stored"

I think the combination of salting and stretching locally based on a pin-code that is never stored but just known by the user makes it harder to guess the salt and also to reproduce the exact process without the user since the local used salt and amount of stretching will be unknown to the server.

If I understand you correctly, your goal is to make it harder to make an offline brute force attack on the password hashes, by using a salt that is never stored.

Let me recap the main points of your scheme to establish some terminology. We have a hash function: HASH(data, salt, itteration count). The user has secrets P1 (password) and P2 (PIN). P2 is hashed locally with N itterations and using P2 as salt: H1 = HASH(P1, P2, N). H2 is sent to the server, where it hashed again (with a user specific salt and M itterations) : H2 = HASH(H1, salt, M).

This would take N + M itterations per attempt, and she would have to make X ^ (LENGTH(P1) + LENGTH(P2)) (where X is the size of the alphabet) attempts to try all possible secrets.

Now compare this to a scheme where there would just be one password with the combined length of P1 and P2, that is only hashed on the server with N + M itterations. Would your scheme be any better than this? No, it would be exactly the same. That would also take N + M itterations per attempt, and X ^ (LENGTH(P1) + LENGTH(P2)) attempts in total.

Long story short, your scheme is no better than just using a longer password. The only difference is that you have split the password in two parts, complicated things a bit, and done some hashing on the client.

Or in more general terms: You can not increase security by doing something with the password client side. If you do F(P) and send that instead of P, the attacker will also do F(P) when she brute force and you have gained nothing.

Some thoughts about rolling your own

You are rolling your own here - that is, you are coming up with your own solution to a problem where an established best practice already exists. This has been discussed here many times before:

Rolling your own system when there are established solutiongs seldom leads anywhere. You add more complexity, but you seldom add any security. If you are lucky, at least you don't make things worse. But if you are unlucky, there is no limit to the problems you can cause for yourself.

In your case, I don't think you did any fatal mistakes leading to obvious vulnerabilities. But who knows? Not me, not you. And when you implement this complex system, there are so many more places where you can make a tiny mistake and ruin it.

That said, speculating about alternative solutions can be a very useful learning experience and help us understand existing practices and concepts better. So there is nothing wrong in proposing and discussing different systems, as long as you don't roll them out into production.

The local hashing will not help against passive MitM if the authentication process is simply sending the hash to the server. The attacker can capture the hash during registration/password change and just send a request with the hash instead of using your web application which computes the hash based on password and pin code.

Server side hashing keeps serving the same purpose, protecting passwords in case of DB breach. I believe it serves no MitM protection? Explain how if you believe it does protect in any way against MitM.

Nothing keeps the attacker from crafting his own messages.

Just deploy your application over SSL and you are safe from MitM attacks.

Not the answer you're looking for? Browse other questions tagged authentication hash password-management salt key-stretching or ask your own question.

530
Is my developer's home-brew password security right or wrong, and why?