Is there a reason why legit web sites are using this type of obfuscation?

Saw some top 200 web sites (by Alexa) using obfuscation in the javascript code. Any ideas on why they do it? My guess is that they do it to prevent data scraping, but not sure. Thanks. 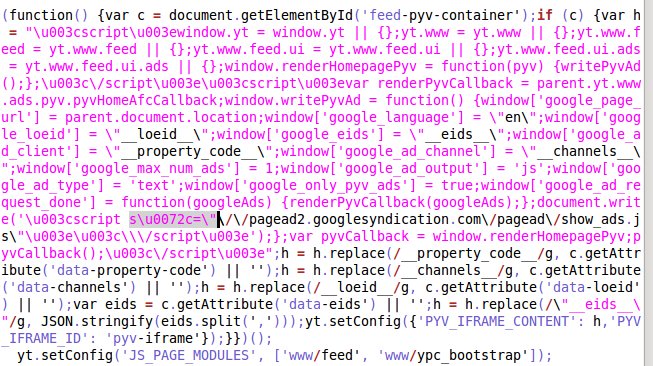 You got good information from the answer and commentary, but, they didn't exactly answer the question.

The reason obfuscated code is used depends on the author.

The author is a jerk: If the author is writing malware, un-obfuscated code can be easily parsed by malware checkers using signatures, presence of tokens, pre-compiling, and other methods. The author in this case wants the malware to spread, so, code is obfuscated to attempt to avoid detection.

(note, this is not legit, so, doesn't answer your question; but I added it for posterity)

The author is using patented code: If the author is writing proprietary code, whether in the java/vbscript or in the ActiveX library it is using, obfuscated code is the programmer's way to prevent the casual hacker from learning about, and possibly exploiting, stealing, profiting from, or giving away these secrets.

The author is using secret functions: If the author is writing code which uses secret (unpublished) functions in ActiveX libraries, obfuscating the access to those functions can mitigate the casual hacker from seeing, using, and exploiting this code. Although a dangerous practice, sometimes, programmers use "backdoor" logic - something which doesn't require authentication, or expensive checks and balances, etc. This kind of code is sometimes called "debug" code - something temporary, or something which is deliberately left in production, and which "shouldn't" be used.

The author is using deprecated or beta code: If the author is writing code which is using functions which are not intended to be used in regular production - say, the code is deprecated or is in beta/alpha - then obfuscating it will mitigate anyone trying to copy, use, document, or rely on this. Here, there's no attempt to harm someone's computer, or to steal code.

It's not obfuscated script. it's only minimized script for faster loading purposes.

These are some sample scripts.

Obfuscated Script (using my self method):

See, those 3 scripts above are same (equal).

Not the answer you're looking for? Browse other questions tagged javascript obfuscation or ask your own question.

8
Canonicalization & Output Encoding
20
How to validate if a JavaScript library is secure?
17
Obfuscating JavaScript code
6
What methods are websites using to prevent direct access to media?
3
Uncontrolled Format String Vulnerability in JavaScript
1
When is CORS applied?
5
Stop YouTube tracking when signed out
4
Security on a REST Api used from a JS
40
Why is there no web client for Signal?