I've gotten, over the past couple of weeks, at least three screens popping up saying "Urgent Firefox Update". These are from URL https://eexowdlzyjx.net/. At least once they have been preceded by "request to load" security popups from unknown (and equally obscure) URLs. All this while browsing the BBC news site.

Am I correct in assuming that these are bogus?

For some reason today Norton "caught" this, since right after the bogus screens popped up it came up with a warning that it had stopped a virus. It labels it pf06aivz.js.part and calls it a "JS.Downloader".

The bogus screens came up just after I closed a BBC screen, and the bogus web screen loaded over ("pushed down") a CNN screen. Not sure what that suggests.

Always, always use ad-blockers. Browsing the web without an ad-blocker is like sex without a condom. Always use one unless you are 100% sure the site you are browsing has malware-free ads.

I would refrain from clicking on any pop-up, especially in this case, as Firefox auto-updates in the background and requires no user input, unless a browser restart is required.

When I get it, it's not a pop-up, the page I'm at is replaced by the "Urgent Firefox Update" page and then it immediately tries to download firefox-patch.exe. This has happened to me twice, once I was on eBay and the other time I was on a random local news website. FWIW, I have Flash set to ask permission before loading, so it's not a flash ad doing it. But I do believe it must be an ad somehow calling this malicious website because the only action on my part is possibly scrolling. I'm running AVG with the latest definitions and it doesn't find anything. 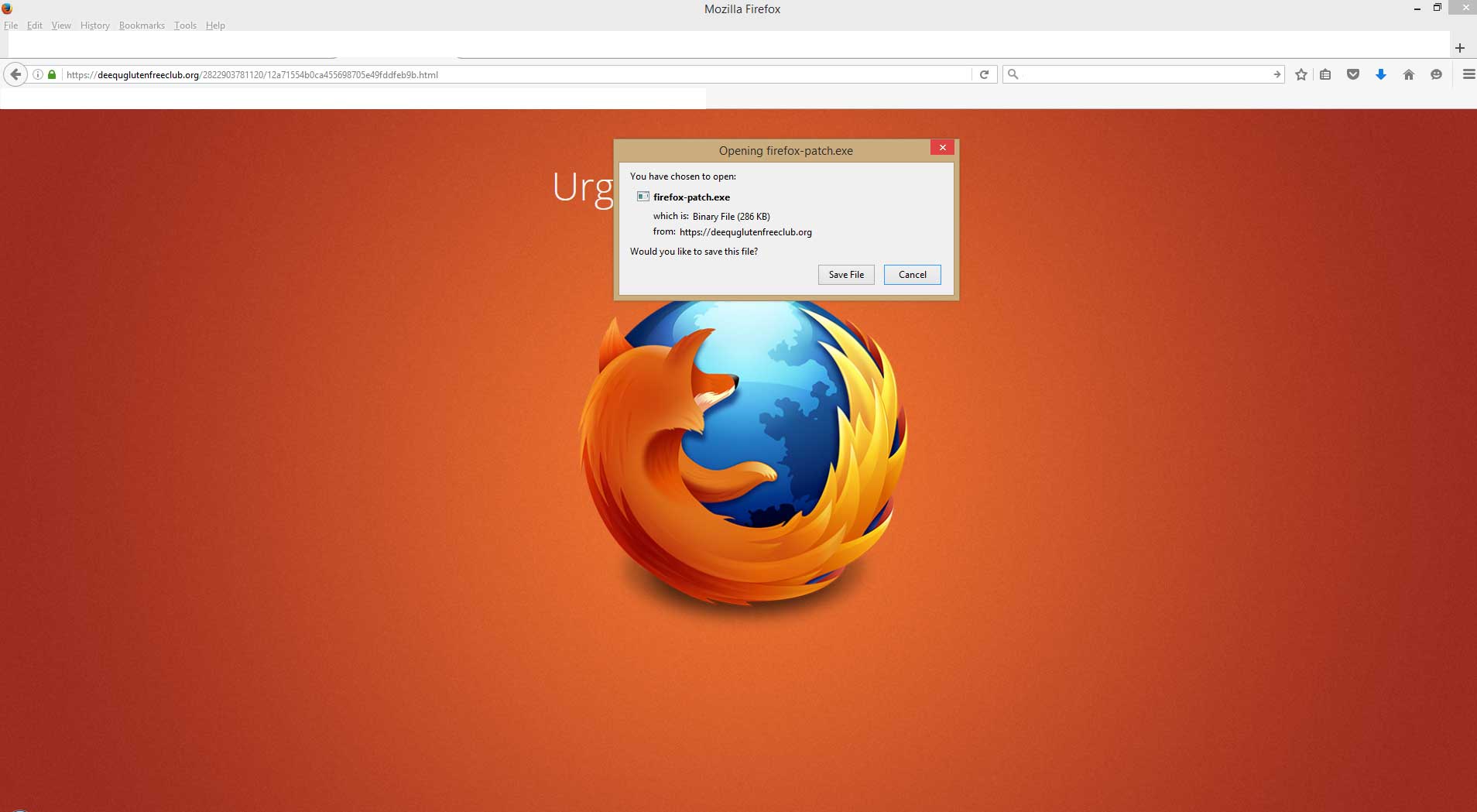 Scan your computer. Check your host file for weird entries. I have the habit of using a non-admin windows account and whenever a program wishes to make changes or launch, it will prompt for my admin credentials. This will mitigate any unknown changes from malware. Currently using WebRoot security program because it has a feature of blocking known malicious IP from connecting to your OS.

Always type in the URL if you know rather than clicking on a given link or pop up. You can use your browsers/programs update button to check for legit updates.

Store your data on a separate hard disk away from your system disk if you can. Backup your data regularly, I use a NAS to sync data from my computer like how Dropbox does. So, I will always have two copies of my data.

Also, do not trust these Green Locks or HTTPS seen on your browser easily. It's not difficult to get a certificate or to make a self-signed certificate looks legit (although this method needs an attacker to install a trust cert into your browser first)

Probably a malware or an advertisement popup. Scan your computer and block popups from unwanted websites.

Not the answer you're looking for? Browse other questions tagged malware firefox or ask your own question.

5
Why firefox shows some connections are not secure?
5
How safe are Firefox addons from official mozilla.org site?
1
What is the impact of "urgent Firefox update" malware?
13
How are Mozilla Firefox passwords encrypted?
0
Are the privacy features of Firefox 69.0 complementary to PrivacyBadger 2019.7.1.1?
5
Firefox SSL_ERROR_BAD_CERT_DOMAIN but the names are correct