httpoxy - does TLS/SSL mitigate the vulnerability of HTTP Proxy header?

My question here: Are sites served via TLS also affected? Or is this an issue only for HTTP sites (unencrypted communication channel)?

EDIT: Added image to clarify the threat and the attack scenario: 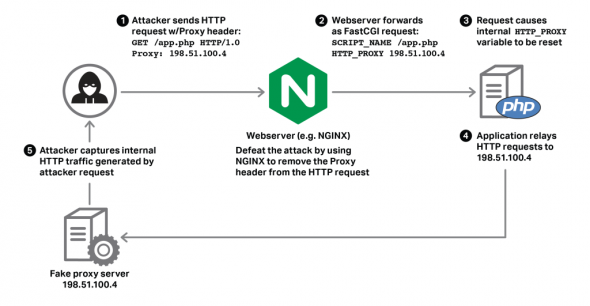 I did not know about this until I read the link you posted, so do not view this answer as authorative. I would recommend you to take the precautions listed under "Immediate Mitigation" now, until you are completely sure you are not affected.

First, how does this vulnerability work? This is a short form of the PHP example explained under "How it works":

The important thing to note is that there are two requests being made here:

If you use HTTPS for A it does not matter (I guess that is what "sites served via TLS" would mean). It gets encrypted to plain old HTTP anyway. So you are vulnerable.

However, if you use HTTPS for B it can matter, since (as hectorct pointed out in comments) the attacker will not be able to MITM the request anyway, assuming the client checks the certificate and the TLS is good and so on. It is that second request that they are talking about in these passages (my highlight):

A few things are necessary to be vulnerable:

And, of course, another defense-in-depth strategy that works is to use HTTPS for internal requests, not just for securing your site’s connections to the outside world. Those aren’t affected by HTTP_PROXY.

TLS is an end to end encryption which means that the traffic between the client and the server is encrypted and can't be accessed by someone performing a MitM attack for example. This does not protect your server in any way it only protects the data that is transmitted. So yes it can be exploited through http aswell as through https.

Not the answer you're looking for? Browse other questions tagged tls http proxy http-proxy httpoxy or ask your own question.

15
How likely/possible is it that the NSA have broken common encryption techniques such as SSL/TLS?
5
Should login pages be cacheable?
6
Can you sniff traffic to ip address from outside of your network?
23
What ways are there to verify a self-written protocol?
1
Reverse Proxy SSL container
22
Securing web applications with only a reverse proxy
5
What are the risks of using TLS 1.0 for web applications?
4
Is a modal payment over HTTPS secure if the main page is only HTTP?
3
In what situations can SSL keys be “forged” and what does that mean?
0
Does TLS 1.3 mitigate the BREACH vulnerability?