Why don't we need a WPA handshake on a ARP spoofing MiTM attack?

On wireless network running under WPA2 protocol, the communication between a client and the AP is encrypted using a session key (calling it that way, but if there's a more exact term I'd be glad to edit it) that is exchanged between them during the 4-way Handshake (which checks if said client is in possession of the PSK).

This session key is unique for each client connected to the AP. I'm assuming that statement since when an attacker is sniffing a network, he needs to have the handshake of each client if he wishes to decrypt every clients communication with the AP. So even if you're connected to said network, you won't be able to decrypt someone elses communication with the AP, since your session key is a different one (unless you happen to capture the 4-way handshake of the other client).

During a MiTM attack using ARP spoofing, you are already connected to the AP, but you don't have the other clients session keys. Once you poison their ARP cache, they will start sending the packets meant to be sent to the AP to your machine. The question is, since they still believe they are talking to the AP, won't they encrypt the packets using the session key that they exchanged with the AP during connection?

I ask that because experimenting (on my own network) I didn't need the 4-way handshake to see the decrypted traffic on the attacking machine, which I believed I'd need. I was wondering if maybe the session key is attached to the MAC address, so once the victim starts talking to your MAC, even though it believes you're the gateway, it will not encrypt the traffic with the session key it was using before.

Firstly, in order to do ARP poisoning you have to be connected to the wireless network you're going to poison responses on. You may already know that, but your question doesn't indicate that you know that's a requirement, so I wanted to make sure that it was clear. As for your answer:

Simply put, ARP poisoning works because ARP works. The only thing that changes is that the value of the responses sent by the attacking machine are faked. ARP replies are implicitly trusted, and because they expire, they need to be refreshed periodically. Attackers leverage this implicit trust to send fake responses. If the details of the 4WHS were needed for ARP, no one (real or attacker) would be able to communicate ARP replies.

By way of ARP poisoning you may be able to route packets through your machine and place yourself in the middle. However, you need to capture a 4whs in order to be able to crack the PSK and actually decrypt said traffic. You are correct in stating that encryption happens at a lower portion of the layer. As a result, without a 4whs you will only be able to see encrypted traffic between the victim client and the AP.

In your scenario there are two possibilities.

Wait, making sure to periodically inject the spoofed ARP packets into the network in order to circumvent possible ARP cache time-outs in hopes of capturing another handshake when the victim eventually reconnects.

Sending disassociate packets to the victim client in order to force another WPA handshake that you can potentially then capture.

Take a look at this entry in the aircrack docs.

This previous post is relevant to this discussion as well.

After your rewrite of the question, your scenario is more clear to me.

Brute forcing a WPA session isn't confortable or trivial. However, there are tools that have modules to automate the cracking process(some possibly behind the scenes?). Besides the above mentioned authentication scheme, I am not aware of any other vulnerable components of WPA2 that you could've possibly exploited "in passing".

With the information available, the most likely explanation is an oversight on your end. That is, you indeed performed the attack and lost recollection, or you possibly mistook the session in question for another.

If you have the evidence to review the session and/or replicate, by all means get back to us.

I hope this helps.

This isn't a definite answer, but I believe it could be pointing in the right direction.

I found a PCAP file of one of my experiments, which I can't share because of the file size (over 40.000 packets) and presence of potential sensitive data. Along the things I noticed, the following seems really pertinent to the discussion:

Even though the capture starts from before I connected to the access point up to the end of the ARP spoofing attack, the only 4WHS present was my own. The victim didn't repeat the 4WHS during the whole attack. However the traffic was completely unencrypted.

The illustration below represents the attack scenario (ignoring the fact the AP is a WiFi Range Extender). The black lines are the normal traffic flow and the red lines are the result of the MiTM attack: 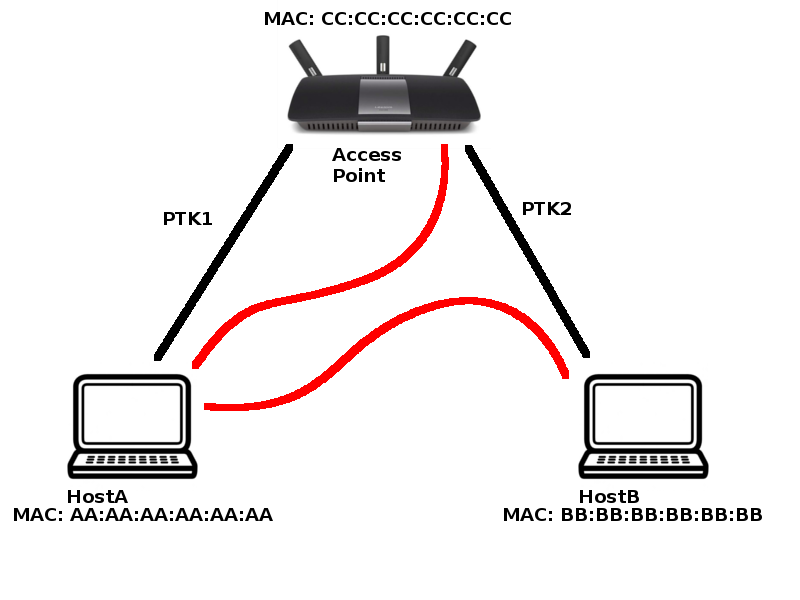 This backtrack forum thread (ARP-Poisoning MIT on WPA2) also seems to point there is no need to have the WPA2 4WHS information to intercept the decrypted traffic on such an attack.

I plan on further reading the whole WPA2 RFC to see if I find some concrete information about this, but so far that's my theory on what's happening.

I'm choosing @dotproi answer as the accepted one, since he went a little further on trying to figure out what was going on.

If someone has a source that can confirm my theory (or confirm it's incorrect) please share it!

Not the answer you're looking for? Browse other questions tagged man-in-the-middle wpa2 arp-spoofing or ask your own question.

3
What additional difficulties are present in performing ARP poisoning on a secure wireless network (WEP, WPA) vs. an insecure one?
1
How could MITM worked clearly although there is an end to end encryption in WLAN?

23
How exactly does 4-way handshake cracking work?
3
Why does arp spoofing work?
6
ARP spoofing with Scapy. How does Scapy reroute traffic?
1
ARP spoofing doesn't work as expected?
1
Need help understand ARP spoofing attack?
1
How are session keys transferred between a client and a server?