I know that WPA2 is much more secure than WPA. However, it seems the case that both of them are attacked using the same mechanism — basically, capturing the handshake and then doing brute-force. Are both protocols equally vulnerable to brute-force?

WPA was just a quick update to WEP protocol to solve some security problems until the final version of 802.11i standard was delivered.

The message integrity check, per-packet key hashing, broadcast key rotation, sequence counter and key mixing function were updated from WEP in order to patch some of the current vulnerabilities. This is why in some cases, WPA is considered to be a draft of 802.11i standard.

The main difference between WPA and WPA2 is the encryption protocol used:

Aside from this main difference, both WPA and WPA2 uses the same key exchange mechanism. The 4-way handshake is used to exchange encryption keys, so therefore this is why you can attack WPA/WPA2 in the same way, by capturing its handshake and bruteforcing PMK/PTK: 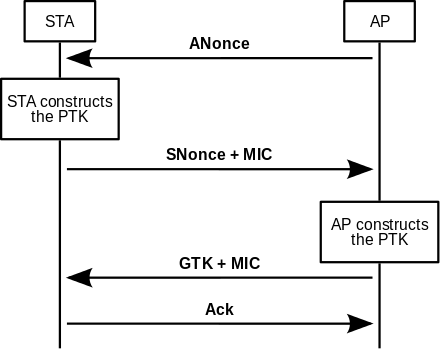 The attacker tries various passphrases, computes PMK and PTK using those passphrases, and then verifies the MAC in order to check if the passphrase was correct.

The authentication mechanism is same, but the difference between WPA and WPA2 is the encryption protocol used.

WPA uses the TKIP protocol while WPA2 introduces support for the CCMP protocol.

And it's worth mentioning that timing attacks against TKIP have been successful. check this.

Not the answer you're looking for? Browse other questions tagged wpa2 wpa-enterprise or ask your own question.