Thanks for you help!

EDIT: When I use openssl verify cacert.pem it gives me this error: 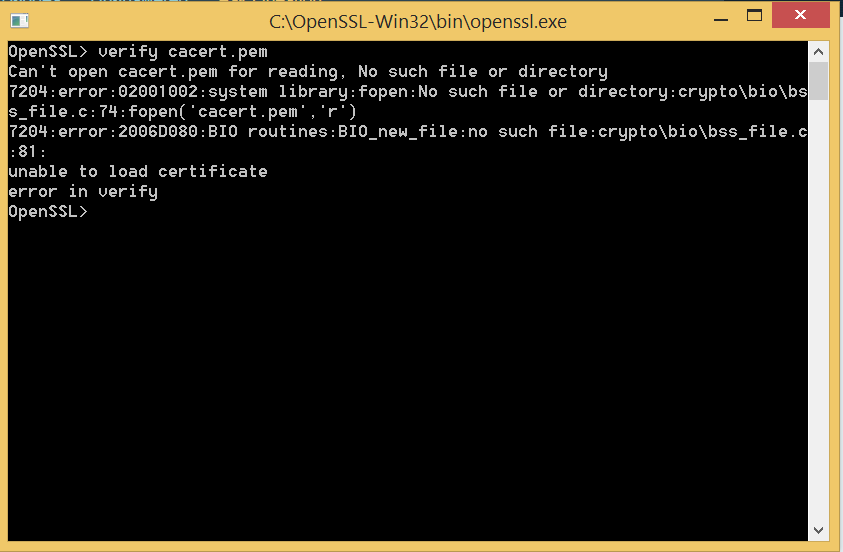 The first error was due to your trying to 'read' (and verify) a non-existent file.

The second would seem to not be an error, but a 'proper' failure to verify.

What the message actually says it that it cannot find the CA that issued the cert you are testing, and so cannot validate the chain (which would generally be, at minimum issuing CA > your cert).

The SSLeay demo server line in your second output would tend to indicate one reason for this is that indeed, you just generated a new CA.

It also looks like you are trying to validate your own CA cert, which is a little redundant - but if you really want to do that, you should run:

A more useful/practical example would be validating a (hopefully) known-good cert. Not sure if you can pipe on Windows, but on Linux, you could do:

If you want to see the cert, you can run:

I think you might want to spend a bit of time reading up on how PKI works: generally, a PKI is built when a 'trusted' entity (a Certificate Authority) issues a certificate for another entity - it basically vouches for that other entity (which can be an organisation, a server, a user, etc) being who it claims to be.

So validating/verifying a cert involves the following (grossly simplified explanation coming up):

At some point, you end up at a self-signed cert belonging to an entity such as Verisign/LetsEncrypt/YourCAHere, which is the root of the chain of trust the PKI reflects.

Couple of minutes ago another related post appeared on this site. The author linked this page which makes me believe that you should check

To verify a certificate, you need the chain, going back to a Root Certificate Authority, of the certificate authorities that signed it. If it is a server certificate on the public internet, that is likely (but not necessarily) one of the hundredish Root CAs that are trusted by the browsers. Those Root CA's public keys are shipped with every browser (in the equivalent of the ca directory in the second openssl command). Ultimately, each user of root certificates needs to decide what authorities they will trust - for browsers, that decision is made by the browser manufacturers and is a Big Deal (tm). You can find the root CAs each trusts - and use that in your root ca directory - if you want, or choose your own.

Not the answer you're looking for? Browse other questions tagged certificates certificate-authority openssl or ask your own question.

1
Creating a CA, server and client certs - chain not included? Or how to verify issuer?