I recently started learning about buffer overflows and how they work. Someone shared a binary to practice on (in a vm, don't worry). I've been feeding strings to the socket that the binary opens, and I noticed that at a certain length, the string will cause the program to not respond with the message it is supposed to. Also, if I feed another string of certain lengths, parts of the message are sent back through the socket from the server, but the other parts just print to console on the server end. I'm not entirely sure what caused this (this isn't the official question for this post, but I'd love to hear an answer in the comments).

And that brings me to my question: Are there any applications that can generate an image of the stack or dump it and generally what's written to it? I think it'd be really helpful for seeing what is happening when I feed the socket strings of different lengths. I'd love it if the size of each 'section' of the stack (don't know what it's called) were represented in the image with a size relative to the other sections (so, I can visualize the size of the stack), or in a readable way.

Something like this would be great if your answer is about generating the image, except it would be nice if it showed how much is written to it (that way I can see when it is overflowing)... 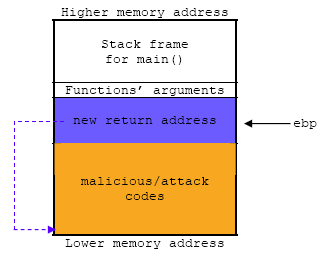 I'd probably generate an image when I start the program, and after I feed the socket the huge values. Then I'd compare. If there are any other ways / better ways of learning, I'd love to hear them.

Edit #2: While there already is an accepted answer to this question, I would appreciate other answers too. The more information, and responses, the more I will be able to learn. Thus, I will reward new answers (if deserved) with bounties. Appreciate it!

Getting a dump of memory the simple way

You can simply send your vulnerable process a SIGSEGV (kill -SEGV pid) and, if coredump is allowed (ulimit -c unlimited), you gonna get a nice core dump file with all your memory in it.

Please note that this will give you a dump of your state at the moment the binary got the SIGSEGV. So, if your binary consists of main() and evil_function() and, while receiving SIGSEV, your program was running evil_function(), you gonna get the stack of evil_function(). But you may also inspect around to get back to main() stack.

Good pointer about all that is Aleph One paper: http://insecure.org/stf/smashstack.html

Guessing the "mapping" by yourself

If we imagine that your binary is implementing a basic buffer overflow, like in this code snippet:

It's quite simple to guess where you should write your buffer address just by using gdb. Let's have a try with the above example program:

Ok, so the stack begin being fucked up after giving 6 extra chars... Let's have a look to the stack:

@binarym's answer is pretty good. He already explains the reasons behind a buffer overflow, how you can find a simple overflow and how we can look at the stack using a corefile and/or GDB. I just want to add two extra details:

The code we will use is a little more complex:

I'm making fun out of HTTP with POST and GET requests. And I am using getchar() to read STDIN character by character (that's a poor implementation but it is educational). The code will differentiate between GET, POST and "rubbish" (whatever else), and does that using a more-or-less properly written loop (without overflows).

Yet, when parsing the POST message there is an overflow, in the message[128] buffer. Unfortunately that buffer is deep inside the program (well, not really that deep but a simple long argument will not find it). Let's compile it and try long strings:

Yeah, that does not work. Since we know the code we know that if we add "POST\n" to the beginning we will trigger the overflow. But what if we do not know the code? Or it the code is too complex? Enters black-box testing.

The most popular black box testing technique is fuzzing. Almost all other (black box) techniques are a variation of it. Fuzzing is simply feeding the program random input until we find something interesting. I wrote a simple fuzzing script to check this program, let's look at it:

It simply does that: feeds increasingly big random input to the program. (WARNING: the script requires a good deal of RAM) I run this and after a few hours I get an interesting output:

It is a segmentation fault alright (see this answer for clarification). Now I do have an input sample which I can use to simulate this segfault and discover (with GDB) where the overflow is.

Did you see something strange above? There is a piece of information I omitted, I used a spoiler tag below so you can go back and try to figure out. The answer is here:

Why the hell I used gcc -O2 -o over over.c? Why a plain gcc -o over over.c is not enough? What is so special about compiler optimisation (-O2) in this context?

To be fair, I myself found it astonishing that I could find this behaviour in such a simple program. Compilers rewrite a good deal of code during compilation, for performance reasons. Compilers also do try to mitigate several risks (e.g. clearly visible overflows). Often the same code may look very different with and without optimisation enabled.

Let's have a look at this specific quirk, but let's go back to perl since we do know the vulnerability already:

Yes, that is exactly what we expected. But now, let's disable optimisation:

What the hell! The compiler managed to patch the vulnerability I crafted with so much love. If you look at the length of that message you will see that it is 141 bytes long. The buffer did overflow, but the compiler added some kind of assembly to stop the writes in case the overflow gets to something important.

For the skeptics, here is the compiler version I'm using to get the behavior above:

The moral of the story is that most buffer overflow vulnerabilities only work with the same payload if compiled by the same compiler and with the same optimisation (or even other parameters). Compilers do evil things to your code to make it run faster, and although there are good chance that a payload will work on the same program compiled by two compilers, it is not always true.

3
Stack buffer overflow confusion
6
Smashing the stack if it grows upwards
4
Inversed Data Direction on the Stack
4
Long character sequence in first string of HTTP GET request breaks the web service's HTTP response. Buffer overflow?
3
Authenticate tracking device with TCP server
2
Can you do an overflow to the heap space from a stack?
2
C - Simple Buffer Overflow Exploitation, how is the EIP overwritten in different type calling functions?