Smart-Screen filter still complains, despite I signed the executable, why?

First and foremost, this is my very first experience with Code Signing.

I bought Standard Code Signing from Certum for 3 years.

I intend to publish applications in Czech republic mostly.

But to the point, on Windows 10, when I download the signed executable, I get bumped by Smart-Screen filter which blocks the application.

I don't know what to think. I used SHA256 and a time stamp. I signed it on Windows 8.1 fully updated.

Here is a code snippet I used to sign the EXE file:

Did I do something wrong?

Here is a picture detail of the signature of the EXE file: 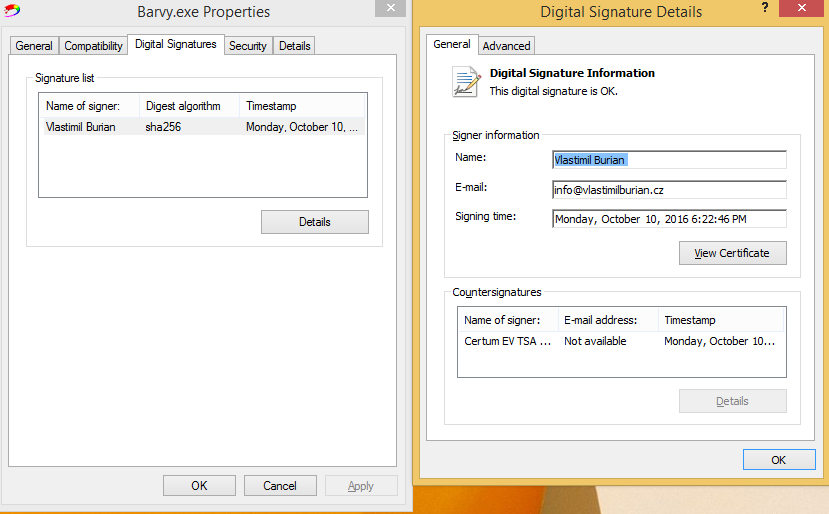 There are two solutions: either wait till the application has a large user base and its reputation will be adjusted by the Smart Screen. However, the current working status might prevent users from installing and trusting the application. The second option is to sign it with an EV (Extended Validation) code signing certificate. Applications signed with an EV certificate establishes its reputation right away. To quote Microsoft:

Programs signed by an EV code signing certificate can immediately establish reputation with SmartScreen reputation services even if no prior reputation exists for that file or publisher.

If you have a standard code signing certificate, some time will be needed for your application to build trust. Microsoft affirms that an Extended Validation (EV) Code Signing Certificate allows to skip this period of trust building. According to Microsoft, extended validation certificates allow the developer to immediately establish reputation with SmartScreen. Otherwise, for some time, until your application builds trust, the users will see a warning like "Windows Defender Smartscreen prevented an unrecognized app from starting. Running this app might put your PC at risk.", with the two buttons: "Run anyway" and "Don't run".

My experience is the following. We have used regular (non-EV) code signing certificates for signing .MSI, .EXE and .DLL files since 2005, with timestamping, and never had problems with SmartScreen, until 2018, when there were just one case when it took 3 days for a beta version of our application to build trust since we have released it to beta testers, and it was in the middle of certificate validity period. I have no idea what the SmartScreen might not have liked in that particular version of our application, but there were no complaints since then. Therefore, if your certificate is a non-EV, it is a signed application (such as an .MSI file) that will build trust over time, not a certificate. As in our case, a certificate can be issued a few months ago and used to sign many files, but for each signed file you are publishing, it may take several days for SmartScreen to stop complaining about the file after it is published.

Not the answer you're looking for? Browse other questions tagged code-signing internet-explorer microsoft-edge or ask your own question.

20
Transferring Microsoft SmartScreen reputation to renewed certificate
2
What's the difference between an executable signed with a Windows Digital Signature and one signed with PGP?
1
Windows Smart Screen pops up after EV Code Signing

4
Is a self signed certificate sufficient to prove the integrity of my executable?
11
Has the leaked D-Link Windows signing key been revoked?
23
Deprecation of SHA1 code signing certificates on Windows
3
SHA-256 Timestamp not recognized in windows 7 when dual signed
5
Why is a .jar signature still valid if a file has been added to the jar?
10
Why does Microsoft use a digital signature catalog instead of a signature in the executable?
0
Will digital signature prevent tempering, or at least harden the cracking, of my Windows applications?
2
What's the difference between an executable signed with a Windows Digital Signature and one signed with PGP?
6
How can a .exe be modified and still keep a valid digital signature?