i have been preparing for CCNA Security exam and going through Cisco Netacademy official lecture of IPSec, when I came across this slide, 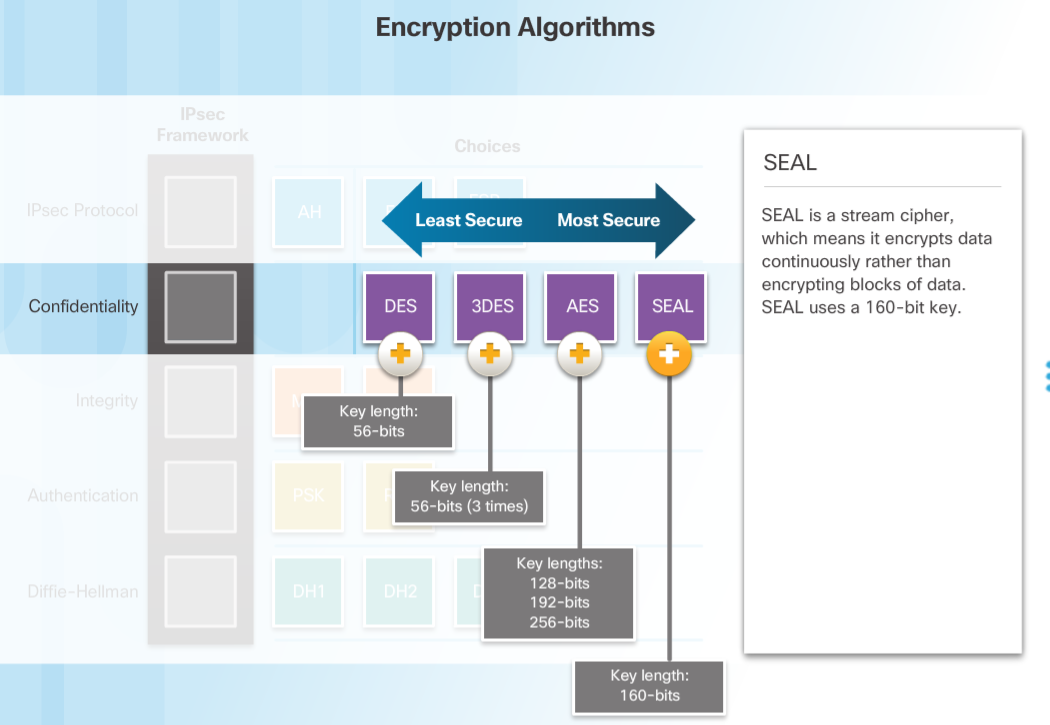 This slide claims that SEAL is more secure than AES256 (or 128/192), but couldn't provide any proof or detail on how it is more secure except that it is stream cipher which I don't think is a reasonable argument to say its more secure.

I went on Wikipedia, but it didn't provide much details.

Can someone please tell me if there are any proof to back Cisco's claim of SEAL being more secure ?

I think they were lazy with the graphic and we're all overthinking this.

The graphic seems to be simply ranking them by key size, in which case the proper order should be:

My guess is they wanted to avoid visual clutter so they condensed all the AES's into the lowest one (added bonus: it makes SEAL look better than it is).

Whether that's flat out wrong or merely misleading is a flame war I'll stay away from.

The claim is misleading; you can prove an algorithm itself is secure, but that sais little about practical security. The implementation for example could have gaping holes. You can prove that cracking RSA can not be easier than factoring a large semiprime number. AES is not provably secure, we just suspect it is prectically secure. Practical security is sometimes quite far from practical security in encryption. The only measure i would consider somewhat valid is that lots of experts have had a lot of time to attack it, and failed. By this metric AES performs perfectly.

As far as we know there are no provably secure ciphers (not counting a one-time-pad with a perfectly random, secret key). So any question of security comes down to "by what measure?".

AES is well studied, but that doesn't mean it hasn't got weaknesses such as possible timing attacks. Furthermore, a block cipher cannot be used on its own, its required to use a block cipher mode of encryption. This in turn may be susceptible to attacks.

SEAL seems to be patented, which means it won't receive as much attention as AES. It has been around for some time, so presumably it's not easy to break. I found one paper that distinguishes SEAL from a perfectly random stream. I'd say that's not much, but it is probably better than any attack on the AES algorithm.

In general, after choosing a relatively well known cipher, the security of the cipher is not high on the list of possible attack vectors. No doubt that there are better ways to attack the protocol.

None-the-less, the statement that this stream cipher is more secure than AES is very dubious. And as indicated, even if it is, it doesn't matter. Stream ciphers are normally used because they're fast, not more secure.

Not the answer you're looking for? Browse other questions tagged encryption cryptography or ask your own question.