Using Wireshark, I am trying to determine the version of SSL/TLS that is being used with the encryption of data between a client workstation and another workstation on the same LAN running SQL Server. Documentation on this subject suggests to look at the ServerHello and ClientHello messages but I cannot see any such messages in the Wireshark message feed. I am using this display filter:

I can confirm that encryption of data is occurring and that the packets displayed using the above filter are related to the SQL Server data transfer that I am wanting to examine. This is what the Wireshark message feed looks like: 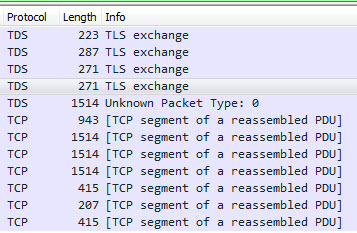 Here is the packet details pane of the 4th packet after invoking a database connection and selecting Follow-->TCP Stream:

This is what I see when analyzing using Microsoft Message Analyzer. The TLS details pane is for the Client Hello packet.

(Adding a new answer which should be definitive, leaving the old around as it's useful debug for how we got here. Credit for pointing to the actual answer in comments goes to @P4cK3tHuNt3R and @dave_thompson_085)

Using Wireshark, I am trying to determine the version of SSL/TLS that is being used with the encryption of data between a client workstation and another workstation on the same LAN running SQL Server.

You are viewing a connection which uses MS-TDS ("Tabular Data Stream Protocol"):

If you view the TDS protocol documentation, it specifies that the SSL packets are encapsulated within a TDS wrapper:

In the Microsoft Message Analyzer screencap you posted, we can see the TDS header (boxed in Red, starts with 0x12), followed several bytes later by the TLS CLIENT_HELLO packet (boxed in Blue, starts with 0x16 0x03 0x03):

So the simple answer to your question, "determine the version of SSL/TLS", is "TLS 1.2".

Now, I've seen varying reports as to whether Wireshark can properly parse TDS packets with encoded TLS. I think that the answer is what you started with - it will tell you TLS is there, but won't parse the details as it would with a native TLS session.

As per this StackOverflow question, it appears that Microsoft Network Monitor is capable of parsing both levels of encapsulation. And a comment therein states that Microsoft Message Analyzer is the newer equivalent of that tool.

I just use this filter in Wireshark to find TLS 1.0 traffic:

Update after an example packet was added to the question -

Additionally, there's a cleartext "sqlexpress2012" string in the packet, which wouldn't be there if this was a TLS Client Hello.

So if Wireshark won't display this as TLS, that's because it isn't. You should revisit your server configuration.

Because those packets are not on a standard TLS port (e.g., 443) you need to tell Wireshark to interpret them as TLS packets. By default port 1433 is not interpreted as having TLS; the default for TDS is to be unencrypted. So by itself Wireshark will not parse it as TLS:

In order to change this, right-click on one of the packets and select "Decode As". Make sure the port "value" is set to 1433 and then set "Current" to SSL:

Click OK and when you return to the packets you'll see they're now interpreted in more detail:

Finally, if you look at the detail pane for one of the packets (I suggest using the server hello, not the client hello, in case protocol was adjusted) you'll see the TLS version quite clearly:

Not the answer you're looking for? Browse other questions tagged encryption tls wireshark sql-server or ask your own question.

0
How to tell if FTP connection is secured with TLS1.2
1
How is TDS authentication data protected?

4
Strange Finished message in TLS
2
Crazy Finished Message in TLS
3
SSL/TLS version switch over reason
3
SSL Authenticated SOAP Request works in SoapUI but not through code
18
How do we determine the SSL/TLS version of an HTTP request?
2
How does DTLS use a CBC cipher if the application data is not reliable over UDP?
1
How to verify TLS renegotiation DoS vulnerability? (CVE-2021-3449)