Counter measures against traffic sniffing inside a LAN

Here's the problematic I'm stuck with, in the next months I'm going to move in, in a little house in France. For the network connectivity the house owner decides to buy a single internet connection. So basically the ISP box is shared with 2 others people but is in my house, so if I decide to unplug it, I cut the connection for the others but anyway.

The first thing that comes to mind was that if I can sniff over the network the other can too, I solved the problem for other possible attacks like ARP cache poisoning etc...

So I come with an idea, but I'm not sure about it that's why I post here.

Here, a basic network diagram (PC 1 and PC 2 have only WIFI access since the box is in my house) 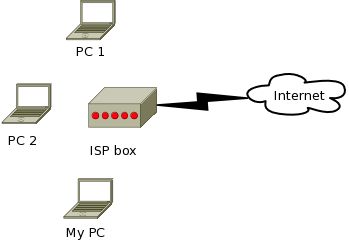 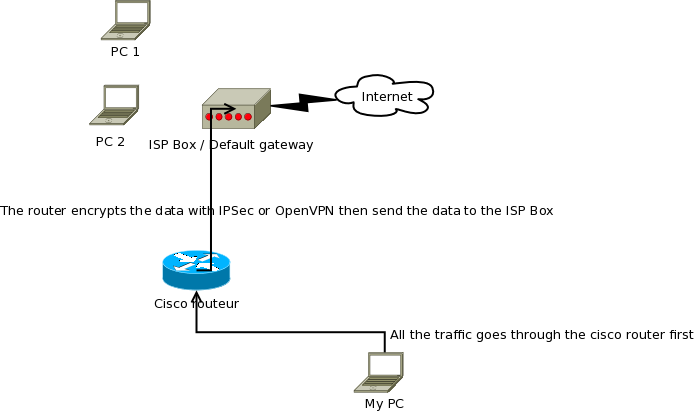 This is the solution I come with, except if I managed to detect that one PC is in promiscuous mode (with nmap per example), I cannot really prevent the traffic sniffing inside my network.

Theoretically according to the second diagram, my PC sent unencrypted data to the router, the router encrypt them with IPSec or with OpenVPN tunnel then route them to my ISP Box, so if PC 1 or PC 2 sniff on the ISP Box they cannot read the datas since they are encrypted through the router, is that correct ?

Feel free to share with me other solution that could do the thing and correct my English :)

Instead of setting up a VPN endpoint on your router, why not set up on somewhere in the internet? Get a cheapo Virtual Machine somewhere, and use that to run something that comes more or less ready-to-use with a VPN endpoint.

But: I'd argue (and that is very rarely the case) that if your router is correctly set up, you don't even have a problem:

Packets coming from your PC go to your router through a cable, and packets for your PC go through that same cable, in the other direction, if I understand your system correctly. The router has no reason to send any of the IP packets meant for you to the Wifi, and thus, the others don't even get to see those packets.

If you're sharing a Wifi with them (ie. your PC is connecting using wifi, like PC1 and PC2), and you've got WPA enterprise, then you get a secure session- and machine-specific encryption key, and the packets sniffed off the air will not be decryptable by the other members of your Wifi. (This doesn't apply to WEP, which is absolutely obsolete, anyway, and not really to WPA-PSK, for which it's possible for any authorized user of your Wifi to derive your secret wifi transmission key by observing a couple of your packets)

It seems that you are looking for LAN Isolation. Basically isolating one LAN port from another is what it does.

Your ISP Box can have such option.

If you don't have "LAN Isolation", you might have "VLAN", but once you have VLAN, you will have "Network Policy" where you can secure VLANs. When using VLANs, each client is on dedicated Virtual LAN (own subnet), so therefore various attacks wont work. Only VLAN isn't enough, you would need to apply some policy to prevent all possible attacks. If there isn't VLAN, there should be "LAN Isolation" which is one-button simplified version.

Encrypting traffic from home router to router (as on your diagram) would work but it's quite complex and might not work as intended, especially if various models of routers are used.

Not the answer you're looking for? Browse other questions tagged encryption network ipsec openvpn sniffing or ask your own question.

2
Could a neighbour see my traffic when we have cable Internet?
3
Router detecting port scan and ack flood attack
0
Basic question about why it's useful to have VPN encrypt traffic
3
How to properly test that an OpenVPN connection is secured?
7
Is it possible to sniff traffic of a remote network? (With admin access to router)
7
Is promiscuous mode sufficient to sniff packets in a wifi network?
2
Can we use network hub as an MITM sniffing device?
1
How can someone on the same GPON splitter network sniff my internet traffic?