I received a suspicious SVG file via Facebook message. What does it do? [closed]

What is this file attempting to do?

This file is part of a virus.

It's an SVG image file containing obfuscated JS code that redirects you to a malicious website. This website will attempt to install malware (a Chrome browser plugin) and forward the SVG file to your Facebook contacts. If you think you got infected, follow these instructions: Help! My home PC has been infected by a virus! What do I do now?

The attacker likely chose an SVG file because it's an innocent-looking image format and less suspicious than executables or HTML files (whose transfer is also prohibited by Facebook). But despite being graphics, SVGs can also contain active script code.

The file itself contains an obfuscated inline <script> segment consisting of two parts. The first part is the function jxnpgmlk() which acts as a decoder that unscrambles any strings that it gets as input. The exact algorithm doesn't really matter because we can simply apply the function on any scrambled strings. The second part is a very short payload. The few strings defined here can simply be unscrambled by using the decoding function, resulting in this:

So essentially, all this code does is redirect you to http://mourid.com/php/trust.php.

From there, two more 302 redirects follow to http://kerman.pw/php/trust.php and http://kerman.pw/?fb_dsa. The final page fakes the look of a Youtube video page to deceive users into installing a supposedly "missing codec". You will instead be prompted to install this malicious Chrome extension called "One":

https://chrome.google.com/webstore/detail/one/olonepdliekllagcdgmlbihgcplinegj
Edit: Google finally removed the extension from the Chrome Web Store but there might still be other instances around.

I manually downloaded the extension file and had a quick look at the obfuscated source code. The extension manifest defines several background scripts that immediately get loaded once installed. This is the essential part of what I de-obfuscated:

As you can see the extension downloads additional JS code from http://cerawa.pw/manalovuci/kojakumoda.bg. (Note that the page won't return anything if you don't send a Chrome user agent.) That response is turned into an object URL and attached to every document while browsing, effectively giving the attacker remote control over your browsing session.

It seems that the malware can be triggered by user interaction only, so if you didn't install the extension you are probably safe. But since the page can easily serve different malware to different user agents or different countries, it's not possible to be absolutely sure that you didn't get infected while visiting the site. If in doubt, it's time to nuke it from orbit.

Bonus: Funnily, that page is also vulnerable to XSS. But I guess they don't have a Bug Bounty Program in place... (http://kerman.pw/"><script>alert(1)</script>).

I got this "wonderful" thing too, and I played a bit with it. Turns out, it only activates when you are using "Chrome", because it tries to install and extension called "One", which is the darn virus. If you open it with any other browser ( Opera, Firefox, Edge, IE, Safari E.T.C.), you will get only the white page, nothing will happen.

I think, that the main essence from the virus is the extension, because then it tries to steal your data from Facebook. When you open it in chrome, it looks like this: 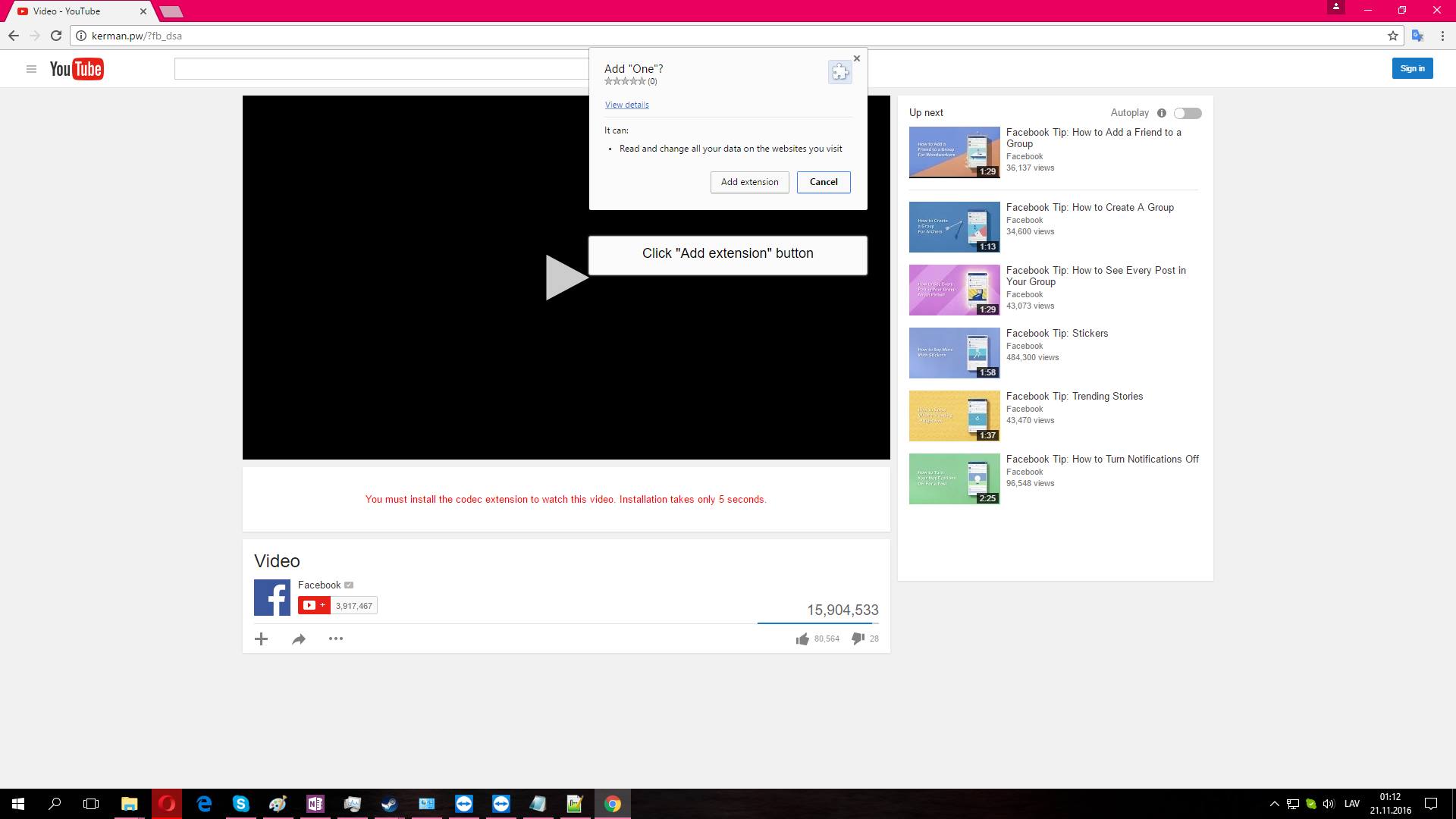 If you click "Add extension", you get infected, it redirects to facebook. At this point, you should immediately close Chrome and uninstall it. OR you can open extensions tab and delete extension called "One", but I don't think it removes it completely.

The code tries to redirect your browser to another website. The URL is kind of encrypted in the string variables within the javascript code.

If you visit a website that embeds this svg image, it will immediately redirect to the - probably malicious - website. In order to defend against Javascript redirects, you can disable Javascript in your browser.

178
Help! My home PC has been infected by a virus! What do I do now?
4
Could an SE question that runs an SVG from a private website potentially be dangerous?
0
SVG virus/ malware with an extension on Google Chrome (one)

14
What file formats are known to be unsafe?
0
What is the meaning of .ini file in startup folder?
15
What does this javascript file do? Is this a virus?
1
What kind of facebook "virus" does share link to list of hex numbers?
0
Does creating a hash on a malicious file lead to opening a malicious file?
1
Received SMS/MMS with suspicious link - what to do now?
6
How does a polymorphic virus identify whether it's already infected a file?