I need to produce a presentation on buffer overflows for a college class. I managed to create a simple buffer overflow where i inject the address of a specific function on the EIP and the function gets executed as expected.

Then, i want to show the more interesting example where i inject shellcode that gets executed. That's when it stops working. I emulated the way people explained it on various websites, but it doesn't work.

Regardless of the shellcode i use (Shellcode), the issue is that the code i injected doesn't get executed. So the program jumps to the correct address, then stops without executing whatever is at the address. 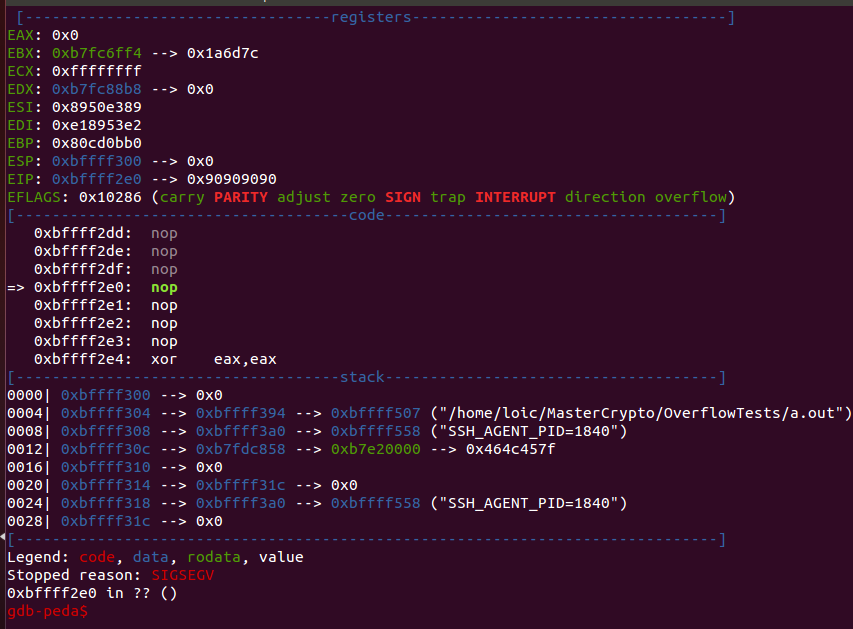 So as you may see in central section of the picture, named "code", the program accesses my nop sled, at address 0xbffff2e0 (shellcode starts 4 bytes below), but nothing happens.

Do you have an idea on what's happening?

What am i missing?

Edit : i'm adding the code used in this exercise, as asked

The stack is probably non-executable. Compile the vulnerable program like this to disable the protection:

Aside from the answers already given here, you might want to check on bad characters. Your shellcode might contain some which could lead to the problem you are encountering. It could also be the reason why your EIP overwrite is not working as intended, where one (or more) byte(s) in the address you are trying to inject is a bad character. For starters, 00, 0d, and 0a are almost always bad characters.