Why do browsers permit redirects from HTTPS pages to insecure URLs that trigger a download?

We know browsers disallow active mixed content in pages served using HTTPS. This is because the JavaScript could be modified by an active MitM which would compromise the security of the page. Many browsers will also block images/other passive content from being loaded from an insecure source for a number of reasons.

Why then, is it possible for a site served over HTTPS to redirect to a HTTP URL with a Content-Disposition: attachment or Content-Type: binary/octet-stream header that forces a download?

For example this download page is served initially over HTTPS but redirects the user to an insecure download URL. Chrome just blindly automatically downloads the file and presents no information as to its origin. Firefox does show the origin in its download dialog but still allows the download to proceed and doesn't warn the user at all: 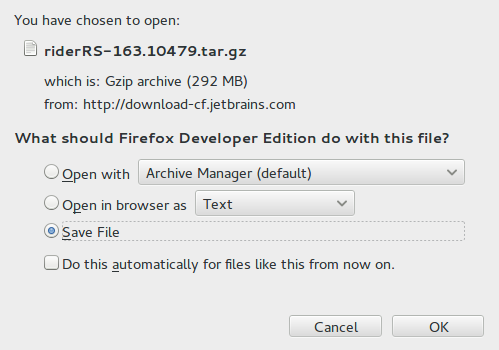 Given that a user downloading and running arbitrary code like this (that they believe to be from a secure site) can do much more damage than some injected JavaScript, why do browsers permit this behaviour? Why aren't these downloads forced to be served in a secure manner like included scripts?

It's about respecting user's choice. Generally, you want to give the user choice to decide what they want to do.

Downloaded applications are inert. Just because you downloaded a virus doesn't immediately harm the system until you run it.

In any case, with applications downloaded from the internet, the user will be asked by the OS whether they want to allow running the application. In Windows, a prompt window appears, in Linux, you'd have to set the execute permission. Also, antivirus applications would scan downloaded applications they're being written/read. There's little need for the browser to prompt the user for this.

Windows also support cryptographic signature that can be used by security conscious users to prove the integrity of the downloaded application. In Linux, this is done by the package manager.

Why does this not apply for JavaScript? Well, generally users don't choose to run individual JavaScript files, but rather they are a side effect of visiting a site. And with JavaScript from unencrypted source, it's trivial for a MITM attacker to modify the script without the user knowing it.

Not the answer you're looking for? Browse other questions tagged tls web-browser man-in-the-middle or ask your own question.

10
Are there any reasons why browsers should block mixed passive content by default?

27
Guidance for implementors of HTTPS-only sites (Server side)
3
Do most browsers handle mixed encrypted and unencrypted content correctly?
18
Why do browsers warn about mixed content for images?
24
Specific risks of embedding an HTTPS iframe in an HTTP page
10
Are there any reasons why browsers should block mixed passive content by default?
4
Why did I see an insecure browser warning on a page with HTTP links?