I think I have a problem with airodump in Kali in Vmware - when I come to the stage that I should enter airodump - ng wlan0mon, it does not show me any MAC address it - is just empty between BSSID and channel, but in my computer it shows a lot more wireless networks available. I have searched about it, but I couldn't find any help, hope you help me with this stuff. Thanks in advance. 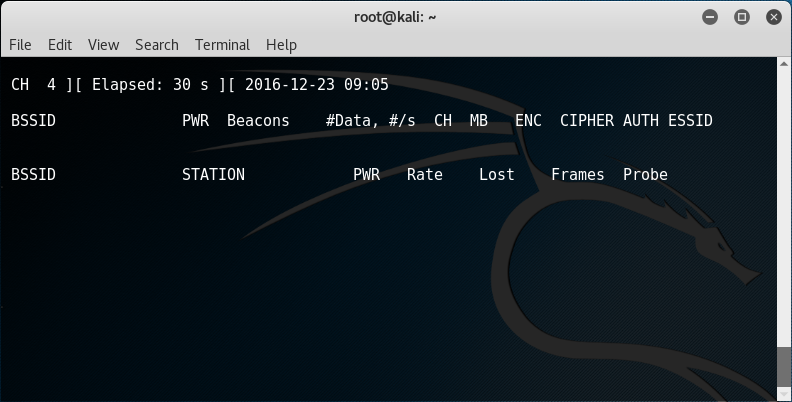 Are you using an internal or external wireless USB to monitor network traffic? Either way you'll want to check to make sure the chip set your card uses is supported by airmon-ng (you'll have to do some googling to find out which chip set you're using and if it's supported) and you'll need to change the card from promiscuous to monitor mode. Assuming that airmon-ng does support your network card you'll need to put it in monitor mode. You can do this by entering the following commands in terminal

That should list items like Network Manager, Daemons, Supplicants, etc. You'll need to kill off all of these processes and make sure they don't re-spawn by entering the following commands

Once you've killed all the items that may possibly interfere with airmon-ng, check the status again, if nothing comes up, then start airmon-ng using the following command

That should change your network interface from something like wlan0 to wlan0mon. Make sure you're using the new interface when using airmon-ng.

Not the answer you're looking for? Browse other questions tagged wifi kali-linux or ask your own question.

3
Strange packets coming over wireless, looking for clues
4
No Handshake from Airodump
0
getting an error in aireplay-ng in kali linux
0
Fear of mac Spoofing. Two Mac addresses appearing on Router page with only 1 digit variation