How was Freedom Hosting 2 hack possible?

Today I read about anonymous attack to Freedom Hosting II, and I was curious about step 3: 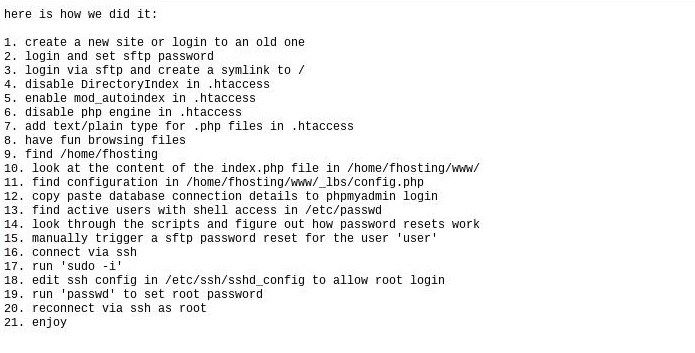 How is possible to someone using a FTP client to create a symlink to /? Doesn't that require root access?

How could this kind of attack be prevented?

No, any user on a *nix system can create a symlink to anywhere else, as long as they have write permissions in the directory where they want to put the symlink. You don't need to be able to view the target; in fact, the target doesn't even need to exist (this is called a broken symlink). However, if you can't view the target file, then you generally won't be able to do anything particularly useful with the symlink.

In this case we're talking about /, and / is generally viewable by all users.

There's not a lot of description in that write-up, but it sounds to me that they used symlinks to bypass a chroot attempt and trick the sftp client into allowing them access outside their home directory.

Not the answer you're looking for? Browse other questions tagged ftp or ask your own question.

0
Iframe hack / done through FTP?
0
How can I prevent my FTP from being hacked?
1
Script injection on different hosting servers = FTP hacking?
3
How safe is FireFTP?
1
How can I make a read-only filesystem read/write?
1
How to enable OCSP stapling on my FTPS server. Is it even possible with vsftpd?