I read that Wifi network cards when disconnected are constantly sending probes to check if any known AP is around.

This means that a hacker could capture those probes and simulate one of the requested networks and finally establish a connection.

Is there a way to disable this? Wouldn't it be wise for the network card to ask which networks are up instead of calling them by the SSID?

Your O.S. is sending constantly probe requests asking for one of your known networks. The attacker get this info and create a Fake AP with that info. Bear in mind is going to work only with Open wifis. Because obviously, the attacker is not going to be able to create one of your known wireless networks with the right WPA2 key.

So you can do different things:

The first two depends of your O.S. the third one is a good practice always.

EDIT: And the subtlety was apparently a little lost in my effort to recommend some sound practices.

Bottom line; if you "hide" your AP at home or at the office, you have to configure your client device(s) to broadcast that SSID. That's because the AP's aren't broadcasting it. Somebody has to broadcast it. If you hide your AP, that somebody becomes your client device. Which means that everywhere you go, if you have your phone or laptop or other wireless device turned on, it is broadcasting your SSID on every WiFi channel, waiting for an AP to say "Here I am."

Here is an example of a normal WiFi client probe request. Note that the SSID field is empty (Length=0):

Here is an example of a normal WiFi access point probe response. Note that it contains an SSID (called "MRN-EAP"). If this SSID is one the client wants to connect to, it can connect: 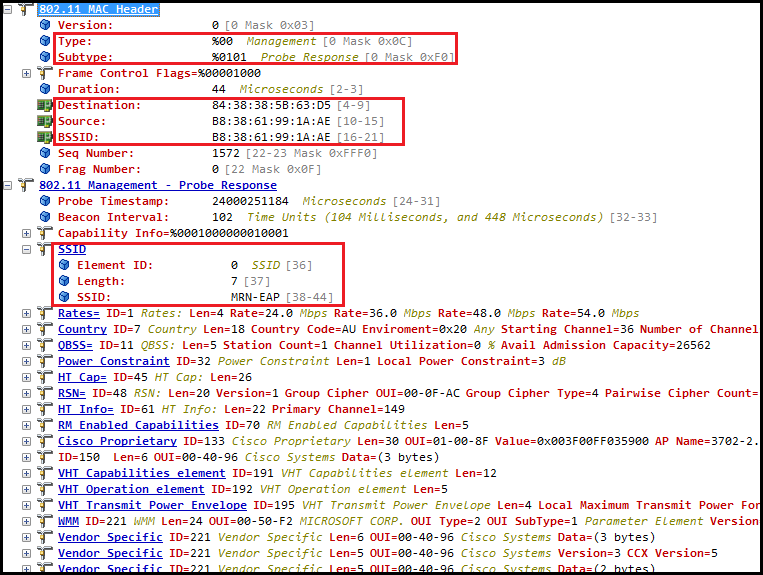 So, if you want to broadcast your home or office SSID everywhere you go, and give WiFi pineapple-equipped attackers far and wide an additional opportunity to get your wireless device to connect to their rogue access point, hiding your home/office SSID is an effective way to accomplish that.

Otherwise, just give your home/office SSID a sensible name, perhaps one that is meaningful to you without divulging more than you want. Maybe call it "GANDALF" instead of "TheRobertsonsHouse," make sure you're using WPA-2 with a good, long complex key, and rest assured you have done it the right way. ;-)

If you have masked your WiFi SSID so that your AP does not broadcast it, then your client device has to broadcast the SSID, like a baby sheep constantly calling for it's mother. It'll do this at your house, at the office, at the coffee shop, at the airport, wherever. In that case, yes, an attacker can absolutely answer that call. Of course, to actually get you connected they would need to know the key (password) for your WiFi network, or if you have your WiFi network unsecured, your device will hook right up to the attacker's rogue access point.

So people will sometimes think that hiding their WiFi SSID is a good security practice, but it is actually just the opposite. It is an anti-practice, a bad idea for security.

What can really get you is somebody using a WiFi pineapple and advertising itself as a common commercial WiFi network, such as AT&T or other systems commonly used in hotels, restaurants, bus terminals, airports, and other locations. The WiFi connection is intentionally unsecured, so that you can connect easily then be redirected to a guest portal where you have to log in. That guest portal is easy to fake. It's just a web page. So you hook right up, "authenticate" to the attacker's fake guest portal with a username and password (which the attacker now has), and then the attacker captures and analyzes all of your network traffic from that point forward, possibly even doing things like automatically redirecting HTTPS connections to the HTTP protocol, and so on.

One of the best defenses against this type of attack is to use a VPN, particularly if you connect from public locations a lot, and never, ever ignore any certificate validation error messages, which could indicate that a man in the middle attacker has intercepted your communication and is substituting a fake server certificate for the real one so that they can decrypt your communication on the fly.

Windows and other OS, have a PNL (Preferred network list) which are the networks you have connected AND checked the "Connect automatically" option. Which makes your computer to add it to the PNL and look for it when there is no wi-fi connection (send probe requests). You can also add them manually just by clicking "Manually Add Wireless Network"

And with your second question it's also possible to wait for a beacon frame, but remember some networks are "hidden" by not sending the SSID. Just a note on what you said:

Wouldn't it be wise for the network card to ask which networks are up...

That's exactly what a probe request does... it probes if X is out there hearing...

And also by removing this functionality you also reduce usability. This is where the triangle of Security, Usability and Functionality makes it's appearance. [ 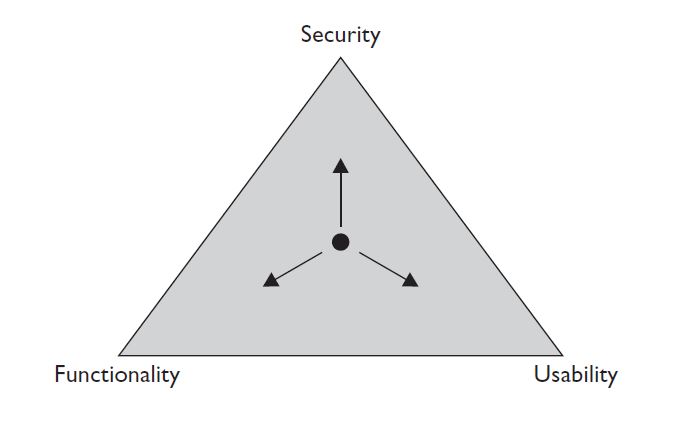 PS: Here you can read the basics on WiFi Probe request and Beacon frame.

Not the answer you're looking for? Browse other questions tagged wifi or ask your own question.

15
What is the need and purpose of packet injection within WiFi attacks
7
Preventing evil twin WiFi attacks on embedded systems
17
Did someone impersonate my WiFi?
3
How to avoid DOS attacks on Wifi?
9
Tools or recipe usable by a non-professional to check their Wifi security for common issues?
2
Are these claims about public WiFi accurate?
0
WiFi security against spoofing attacks
0
Airmon-ng/Airodump-ng - Low Beacon Count on certain networks