How bad it would be? If hackers managed to take down all 13 Root DNS servers at the same time? [closed]

Would such huge DDoS attack can cause any economical damage? How severe this DDoS attack would be, if all 13 Root DNS servers got successfully DDoSed/flooded and taken out? Would any websites even load, even if it would happen??

How much data would be needed to make such big DDoS attack? How large this DDoS attack would be in its peak?

It probably wouldn't be as horrible as you'd think.

First of all, the Domain Name System is a critical part of the Internet and DNS root servers are at the top of the hierarchy as they fulfill requests for the root zone. So, if you want to determine the IP address for a domain name (e.g. security.stackexchange.com) your very first step would be asking a root server for the authoritative name server of the .com TLD. Then you would go further down the hierarchy until you have resolved the name to an IP address.

In theory this means that without root servers, domain name resolution would fail globally, making major parts of the Internet unavailable -- but:

Also, the root server infrastructure is very robust, as concluded after the DDoS incident in 2015 (although the attack could have been made much worse using amplification techniques). While "13 root servers" doesn't sound like a lot, there are actually globally distributed server farms behind it (the root servers use Anycast routing):

In fact, each “server” actually consists of a server farm of many physical servers in multiple locations, for reliability. Server L, for example, is mirrored in 128 locations in 127 towns and cities (San Jose, California, hosts two instances) in 68 countries, from Argentina to Yemen. 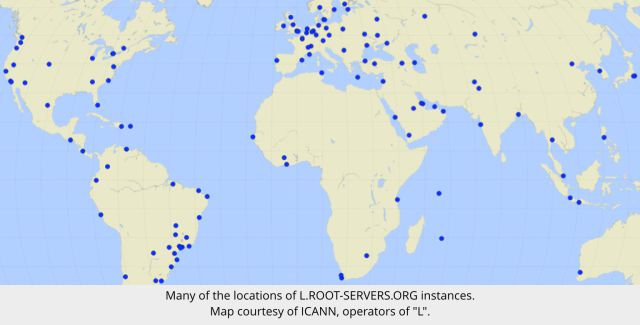 10
Understanding Layer 7 DoS
17
Would it be possible to overload a large part of the internet, and if so then how?
8
Lessen impact of DoS attack on cpu-expensive login?
0
Ongoing DDoS: What is the next step after being able to handle it?
5
Can a Cisco ASA 5505 block this DDoS attack?
8
When detecting a DDoS attack, do you just block that with your firewall or do you report it to the source providers?
6
Did the October 21, 2016 DDoS attack on Dyn's DNS service cause Bandwidth Exhausion?
1
How to prevent DDoS to cause stored data inconveniences?
18
Cloud-based DDoS as a Service
1
Blockchain + shared unused bandwidth as the proxy front = ddos mitigated?