How practical is a laser microphone and how to protect against it?

A laser microphone is a "surveillance device that uses a laser beam to detect sound vibrations in a distant object". - Wikipedia.

It's also known as a Laser Based Listening System (LBLS). 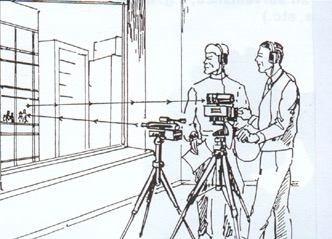 Firstly, how practical or easy is it to use a laser microphone for surveillance and how effective is it?

Secondly, what can you do to protect against such surveillance? I've heard something about vibrating windows.

Thirdly, are there known cases wherein this was or is effectively used?

Lastly, in what circumstances (like weather, distance, target material) can this device be used?

Laser Microphones like any other eavesdropping equipment has pros and cons.

For a while they fell out of favor with the rise of networking/computer eavesdropping technologies which provided more value per dollar.

Recently though, they have been having a semi-resurgence with anti terror units having use for them. Here is an example of one such company marketing it.

The earliest recording of a "Laser" microphone is by an inventor named Léon Theremin.

He created something named the Buran eavesdropping system which essentially used an low powered infra-red beam to detect vibrations made by sound-waves. He demonstrated this device on a pane of glass.

Laser microphones work by shining a light on an object that vibrates (think: glass, plastic cup etc.) When someone speaks (or any other noise is introduced) it pushes the air around it causing the object that the laser is shining on to vibrate.

When the object vibrates it causes minute differences in the distance traveled by the light as it reflects back to a receiver. These difference are detected using something called Interferometry.

These signals are then translated back into sound which allow you to hear what is going on.

Here are the pieces involved to make this work:

This is the device that will 'shine a light' on the object in the room (or on the window. Modern versions of these systems can work at distances of 500 meters

This processes the light signal and sends it to the next piece of electronics for processing.

This is the device that actually turns it into sound for you. This device can be controlled with software to remove noises such as wind etc. to provide a clearer sample.

But remember that the information you are looking for may be in a digital device and not in voice spoken format.

Vibrating the windows is not always effective as software can (and has) been written to remove the frequency from the vibrating noises.

However, one can create a device that vibrates the windows with frequencies that used typically in human speech. Such a device could if done correctly render the laser microphone useless.

Known cases of use

Though there isn't any official documentation of its use, there are some places that discuss its use during the cold war (here is an example).

There has also been speculation whether government agencies used such a device during the Snowden investigation.

In order for this system to work you need line-of-sight to an object that vibrates.

This object obviously has to be within reasonable distance to the source of the noise.

Rain, Snow or any other weather that interferes with an IR beam would affect the ability to eavesdrop.

One last thing to mention is the need for both the shining laser and the receiver to be stationary the whole time and not move. Usually, this is achieved by using a pair of tripods (like in the image posted in the question)

AS A USER OF THIS TECHNOLOGY (no, LeRoy Theremin did not use this since lasers were not developed until Theodore Maiman made the first laser operate on 16 May 1960 at the Hughes Research Laboratory in California) I can firmly state that IF the window is firmly installed and not rattling loosely in its frame, that with computer audio filtering, it is very easy to pick out individual voices in a loud cacophony, that includes very loud music. Ive used it to make very high fidelity recordings of concert environments that included conversational elements of the audience.

I am not as experienced as ScottS in the use of this apparatus, but I understand the basic concept of it.

I think that ScottS answers your first question better than I can. As long as there is a firmly mounted glass window, and the internal noise is louder than a whisper, then the device should be able to pick it up.

There are several ways I can think of to protect against this type of surveillance. The thing you mentioned about vibrating windows is correct; you can essentially mount a small vibrating motor or speaker to each window, which will create enough vibration to drown out the movement caused by internal sound waves. Another thing you can do is to have some sort of a wire screen or curtain on the outside of the window, which interferes with the laser beam. The best option, though, is to simply not have windows in sensitive rooms. Even if a laser can't pick up vibrations, a powerful camera may be able to read lips, or other things like that. Windows, in general, are insecure. (Not to mention that it is a lot easier to break into a room that has a window in it.)

As far as the historical use of this goes, I am not an expert in spy history, but it seems that it has been used in real life espionage by both the US and Russia. Apparently the US embassy in Russia was designed with curtain walls to prevent this type of spying. I don't have any specific instances for you, though.

For your last question, it seems that the only requirement is that the laser is able to reflect back to the sensor, with enough strength for the sensor to detect it. So I can see it easily working from over 100 ft away, as long as the laser is powerful enough. The weather shouldn't matter, as long as the sensor is shielded from direct sunlight. (But snow or rain may interfere, as they would occasionally block the beam of the laser. The recording would probably still be intelligible, but would have a lot of static.) As far as target material, I have seen it used on materials other than glass, but the material must be reflective. Otherwise the laser beam never gets back to the sensor. Also, it must be relatively smooth, because any bumps will distort the vibrations.

By the way, I found a very interesting project here that explains how to make a simple device for yourself.

Not the answer you're looking for? Browse other questions tagged hardware surveillance audio or ask your own question.

6
How does virtualisation (IaaS) protect from CPU microcode updates and firmware changes?
1
What security implications are there when sending video feed over unknown applications, and how can we protect ourselves?
8
Samsung SSD 850 EVO. Best way to protect personal data against thiefs
2
Media files : how to protect from 0-day?
2
Does IOMMU protect against malware insertion through PCI Network card/Sound card DMA?
1
Does HTTPS protect mobile internet connections against “network injection”?
6
How to protect against unwanted photographs?
1
secure Microphone Blocker for Apple devices (macOS and iOS)