I am considering the implementation of a 2 Factor Authentication server and I am concerned that the RADIUS authentication via Shared Secret is not secure enough as for example an attacker could at least steal the usernames. I am wondering if the following communication could be un-encrypted easily: 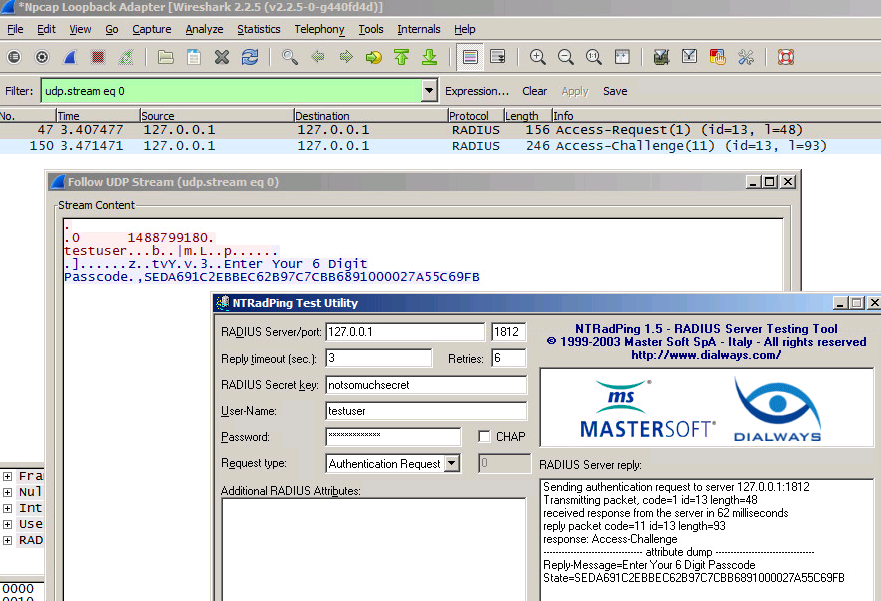 The way most 2FA services for RADIUS work is by acting as a server hosted locally or in the cloud that authenticates RADIUS requests from agents, and then sends the request to their own servers using their own protocols (disclosure: I work for such a company and have studied and built such services).

There are a number of places to attack:

So what does this mean? Yes, someone can read everything but the password in your RADIUS requests if they get between the agent and the server. This is somewhat trivial if the server is in the cloud. It's a little more difficult if the RADIUS server is on the same closed network as the agent. It's debatable whether an attacker can decrypt the password, as it's dependent on the strength of the shared secret, and how many packets they can steal.

Additionally, you have the shared secret if you're communicating directly with the RADIUS server. If everyone has the same shared secret then anyone can decrypt anyone's password.

Not the answer you're looking for? Browse other questions tagged authentication secret-sharing radius or ask your own question.

0
How are RADIUS packets encrypted?

1
RADIUS proxy chains
8
Website: Pre-Shared-Key Authentication
8
Are RADIUS and TACACS+ Ever Allowed in FIPS 140-2 Compliant Scenarios?
2
What can I do to increase the security of my app based on a shared secret?
3
WPA2 with 802.1x - how is the server certificate validated?
0
Can a secret, S, be efficiently recovered from a list of usernames and SHA256(S + username)s?
9
PSD2 compliant two factor authentication
10
Is it a bad idea to have the user choose the TOTP secret instead of generating it automatically?