I wanted to do some in-house research and check how many and what kind of packets I can capture from/to my in-house open Wi-Fi router.

I had Kali Linux installed on Windows 10 machine (Virtualbox) and I use TP-Link TL-WN722N Wi-Fi adapter to capture traffic in monitor mode. I can put it in monitor mode, and I can see captured packets.

However, only small amount of traffic is captured, particularly HTTP packets. I did some test requests from my phone/tablet/laptop and I sometimes get pretty reasonable count of packets captured, but sometimes I can't see any of them or just part of request (for example some script is loaded from CDN, but no original request is captured).

As my knowledge about networking is really basic, I'm interested what can cause that?

P.S.: Wi-Fi card is set to correct channel - same as my Wi-Fi router is broadcasting.

If some of you are experiencing same this answer helped me, so data was transfered in different rates, and TL-WN722N was not able to catch thos packets. Removing 802.11n (leaving only b/g) fixed the issue.

My first guess would be the strength of the wifi signal, are you close enough from both router AND target computer? Maybe you're close to one but far from other, meaning that you will not properly capture packets from both.

Check using airodump if you have at least -67dBm of signal for both router and target. Also, remember that the signal is in a logarithm scale, the higher the number, better. If you get a signal around -50dBm would be good.

If you have good signal from both router and target machine, try to do the capture using airodump-ng [ airodump-ng wlan0mon -c CHANNEL --bssid ROUTER_MAC -w CAPTURE_FILE ] and then open the saved capture on wireshark. From my experience, airodump is more reliable (and you can see in real time the signal strength)

I use wireshark on a daily basis for network analysis.

You will want to make sure you are sniffing of the correct interface first of all, as well as making sure you have the required parser enabled (HTTP in this case).

You will want to verify you are re-assembling headers as well: 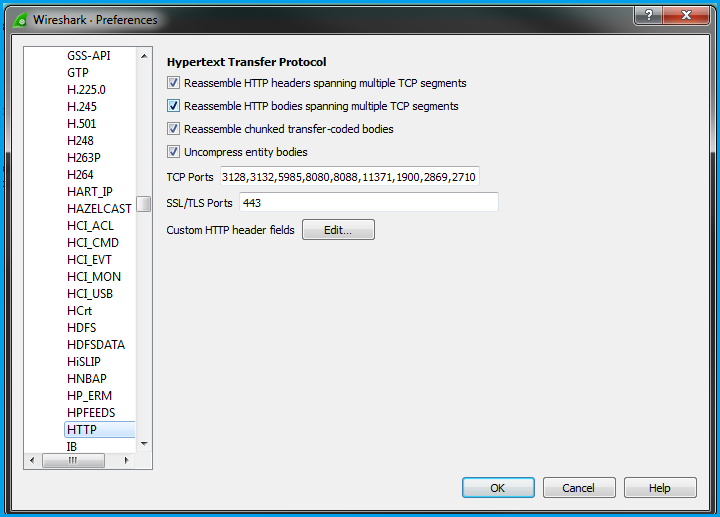 I'd also verify that the strength to your router is adequate and you are not losing any packets.

1
Doesn't seem to be able to capture the packets I need
13
Is my Windows phone protected from attacks that reveal list of ssids it knows about?
2
Capturing (1x Only) HTTP POST Request [tcpdump]
0
Monitor traffic that is going through my router
1
Nemesis packets not detected in wireshark/tcpdump
1
Sniffing the data around me
8
Wireshark can't decrypt WPA2 LAN traffic
1
aircrack-ng issue: No mon0 when run "airmon-ng start wlan0" and "No such BSSID available"