Let's say I have the following scenario. I have QR Code, Eddystone and/or NFC which contains IP address, with which, my client side application communicates. Let's say this IP address can vary from user to user (or let's say from entity to entity, it can be multiple users). Is there a way to protect these "data holders" (QR Code, Eddystone and/or NFC) against spoofing, i.e. an attacker won't be able to replace my QR code with his own, without my application noticing it?

You can place a public key in your application to check the signature related to the IP address.

You will also need a way to protect the private key. I can think of two solutions:

QR codes are just a way of getting text from your camera, so the user can send anything. Nothing would stop a user creating and scanning a QR code to input any text they wanted to.

Also QR codes quickly shrink from the 4,296 max characters you quoted when they use a different character encoding (if you need symbols) and want them easy to scan (maybe like 300 characters is more realistic depending on how you are scanning them).

This is a 2000 ish character QR code and I think its too small for most scanners to scan. 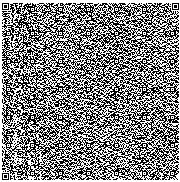 So there is some room for you to include some secret with the address, but then this QR would have to be kept hidden because anyone that reads it would be able to also see that secret. You could have the QR code contain a private random URL that allows a user to create a password, then have them use that password from then on.

Not the answer you're looking for? Browse other questions tagged spoofing bluetooth nfc qr-code or ask your own question.

1
QR-code based credential retrieval?
2
Sharing a JWT between devices in close proximity of each other
2
NFC and ISO 14443 : security?
8
Defending against wifi spoofing
2
NFC Android (Ntag213 vs Ultralight C)
1
Could QR Code Generators be passing info “over my head”?