ELI5: What is the goal of the senders of the fake texts I receive 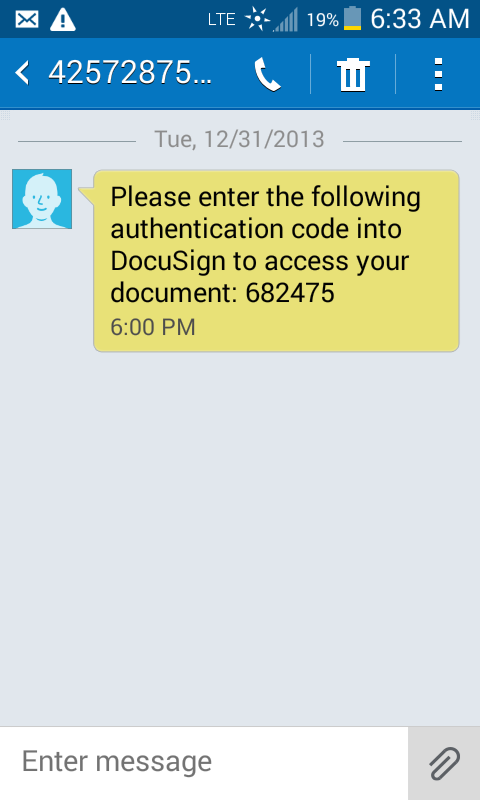 ^^^Fake text sent to me, have received 10 this week. This was in the first batch of four I received around 630 am this week. It is incorrectly dated to say 2013 and it says PM but was actually received in the AM. It is also off by about a half hour.

Earlier this week I began receiving series of texts early in the am while asleep. The texts are as pictured above. The first one came around 630 am and woke me up so I deleted it asap. A minute later another which I screen capped before deleting. A moment later another, then finally a fourth which was incorrectly dated and timed. I saved a screen cap all but the first.

A day or two later in the evening time I received a series of such texts again, this time four of them as well, each time the pass code being different. Each time I would immediately delete them after a screen cap. A following evening while at work I received one while at work and was unaware, didn't have time to delete it for over an hour. Oddly this time only received one. Two days ago, I received a rapid fire series of 6. Up until then it had been 4-1-4 I screencapped and deleted them all.

I called my telecom co and the executive looked it up and said he didnt seem to see any " record of the transactions " meaning the phone company had no record of there being any series of texts at those dates and times from the number listed or any. I emailed the screen caps.

I also looked up DocuSign to see what they do. Then I called. They said it sounded like a text the companies who use their service send out to allow for opening of and or signing documents but that they could only verify it by my email. They looked up my emails and had nothing. I checked all my emails including spam and wasnt sent any links to use the passcodes on. Yet they keep coming.

If they arent really from DocuSign and they don't actually appear in the records of my tele provider then what is the person getting out of sending them? I worried at first they were up to a scam or crime and harvesting the passcodes through some hacking means just to have a phone number to link to an unsavory activity or to steal my identity but if the texts arent from DocuSign and real and the phone company has no record of the transaction what is the method, I mean by what means does someone achieve this and what do they seek to get out of it?

Im thinking that by knowing how it is done and what a person may get out of it I may come closer to knowing who did it.

I think the way things like DocuSign work is that you can send files to people using a email and probably text by sending a key and then the person can securely access the files on DocuSign's website with the pin. This means if someone somewhere is trying to send documents to someone but have your number by mistake, they would keep sending you these texts. With the numbers of texts you are getting it probably means your number is mistakenly in a database somewhere as contact info for someone else.

You said that DocuSign only verifies emails but maybe some system in the middle will parse emails for some addresses and send a text to the user as well and this doesn't have anything to do with your telecom provider or DocuSign themselves. The system could also be reconfigured with the wrong timestamp application onto texts. I would have no idea why your telecom can't find the texts in this case.

Although it is possible your texts are compromised at your telecom and someone is using it to gain access to files posing as your number. Either way, your info isn't at risk.

Your number is public so anyone can text you. You should ask to block the number these texts are coming from if you wish to stop getting them.

If the texts arrive to your phone then your telecom provider has a record of them. However, for the customer service monkey paid a few dollars an hour in an offshore call center, it's easier to say there is no record than actually looking it up. It could also be that they have no access to it and the company doesn't want to allocate engineer time to look it up in a database (it's a phone company, anything that doesn't involve scamming customers and making them commit to 24 month contracts isn't important).

I would personally consider those texts to be legitimate and coming from DocuSign. Either someone mistyped your number instead of the document's intended recipient, or they are spamming you on purpose and using Docusign as their spam service (SMS costs money to send, so if you want to spam someone there's nothing better than someone who does it for you and for free).

Not the answer you're looking for? Browse other questions tagged spam sms or ask your own question.

9
Is there a list of phone numbers Facebook uses to send auth tokens?
1
Unexpected phishing attempt by SMS
3
Call and Unsolicited One Time Passwords
9
Functional Google 2FA code (via SMS) received from a random (but in use) mobile phone number
3
How is a bad actor able to disable Amazon's 2-step verification without supplying a OTP?