Code injection is the process of injecting some malicious code into a legitimate binary.

A lot of code injection projects that I have seen involve finding a large area of null bytes (\x00) in the .text section of the binary in order to inject shellcode. Then the address of the entry point is changed in order to point to the injected shellcode. The injected shell code will then point to the beginning of the original code after finishing.

Sometimes there are not enough contiguous \x00 bytes available in the .text section in order to perform this action. As a result, the project will not be able to perform code injection.

Why don't they just increase the size of the ".text" section segment? Is it because of security reasons?

Binary modification is a complex subject and requires some understanding of the system's application binary interface (ABI), process layout in virtual memory, the runtime environment, and the compilation process. Background information will be discussed here in order to provide context for the answer to the question.

Code injection into binary is the process of injecting some malicious code into a legitimate binary.

Code injection usually refers to code included in input entered at program runtime, which differs from the process described above, in which a binary is statically modified prior to program execution in order to alter its runtime behavior.

The software constructs all or part of a code segment using externally-influenced input from an upstream component, but it does not neutralize or incorrectly neutralizes special elements that could modify the syntax or behavior of the intended code segment.

When software allows a user's input to contain code syntax, it might be possible for an attacker to craft the code in such a way that it will alter the intended control flow of the software. Such an alteration could lead to arbitrary code execution.

Injection problems encompass a wide variety of issues -- all mitigated in very different ways. For this reason, the most effective way to discuss these weaknesses is to note the distinct features which classify them as injection weaknesses. The most important issue to note is that all injection problems share one thing in common -- i.e., they allow for the injection of control plane data into the user-controlled data plane. This means that the execution of the process may be altered by sending code in through legitimate data channels, using no other mechanism. While buffer overflows, and many other flaws, involve the use of some further issue to gain execution, injection problems need only for the data to be parsed. The most classic instantiations of this category of weakness are SQL injection and format string vulnerabilities.

Altering the structure of an executable binary prior to execution can be referred to as static binary instrumentation, but is more commonly referred to as patching.

From PEBIL: Efficient Static Binary Instrumentation for Linux (emphasis mine):

The distinction between runtime process modification and static modification is important, because their technical implications are quite different.

Sometimes, there is not enough available \x00 bytes into the .text section in order to perform this action. So, the project will not be able to perform that injection.

Why don't they just increase the size of the ".text" section segment?

There is an important distinction between sections and segments in ELF binaries:

Sections and their associated information are used by ld to perform relocation and symbol resolution.

Here is a diagram from the System V ABI contrasting sections with segments:

Object files participate in program linking (building a program) and program execution (running a program). For convenience and efficiency, the object file format provides parallel views of a file’s contents, reflecting the differing needs of these activities.1

Why does this matter? The address ranges of the a program's sections, including the .text section, as well as the address range of the .text segment, are both determined by the linker which is invoked on the object file at after preprocessing, compilation and assembly. From Advanced C and C++ Compiling page 26:

• The ultimate intention behind the idea of building the program is that the sections obtained by compiling individual source files be combined (tiled) together into the single binary executable file. Such binary file would contain the sections of the same type (.text, .data, .bss, . . . ) obtained by tiling together the sections from the individual files. Figuratively speaking, an object file can be viewed as a simple tile waiting to find its place in the giant mosaic of the process memory map.

• The inner structure of the object file does not, however, suggest where the individual sections will ultimately reside in the program memory map. For that reason, the address ranges of each section in each of the object files is tentatively set to start from a zero value.

The actual address range at which a section from an object file will ultimately reside in the program map will be determined in the subsequent stages (linking) of program building process.

• In the process of tiling object files’ sections into the resultant program memory map, the only truly important parameter is the length of its sections, or to say it more precisely, its address range. 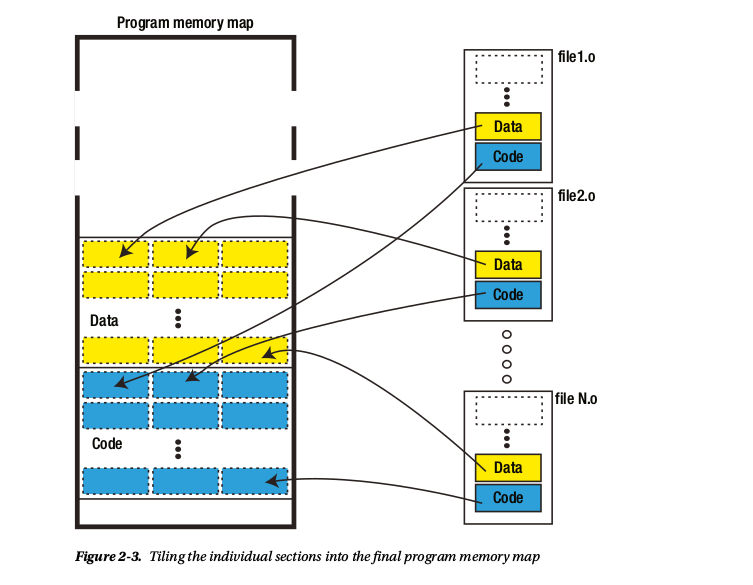 It should also be noted that an executable ELF binary's text segment consists of multiple sections in addition to linked .text sections:

The third segment (segment 02) is of type LOAD, has execute permissions, and corresponds to the process text segment in virtual memory. Here, this segment consists not only of the .text section but also several others, some of which consist of data rather than instructions, such as the .rodata section.

In light of the information of sections and segments shown above, it is important to note the at linker controls the following:

Looking at a sample output from a link map shows in a concrete manner that it is the linker that controls program memory layout through the assignment of memory addresses to sections and symbols:

Why don't they just increase the size of the ".text" section segment? Is it because of security reasons?

The address range of the .text section and the layout of the text segment in memory are determined by the linker at binary build time. In order for any changes to these to be made, access to the source code of the binary is required, since the binary would have to be rebuilt (compiled -> assembled -> linked) with a new memory layout, which is controlled by the linker.

Patching is performed if rebuilding the binary (which implies access to the source code) cannot be done.

If I am reading your question correctly, it all depends on the code of the binary, not the size of the .text section. Have you read how a buffer overflow works? The reason for the padding is to get to a point that the code will "Return" or execute your desired (shell)code or address. Expanding the .text section would not do anything. It's all about putting the proper input guards in place so that the malicious injection/ user input will not allow for this type of attack.

Not the answer you're looking for? Browse other questions tagged injection or ask your own question.