How does the flow option of Snort work?

To answer your question:

I'd like to expand on this. TCP connections use a 3-way handshake (3WHS). The client sends a SYN, the server responds with a SYN+ACK, and then the client replies with an ACK. 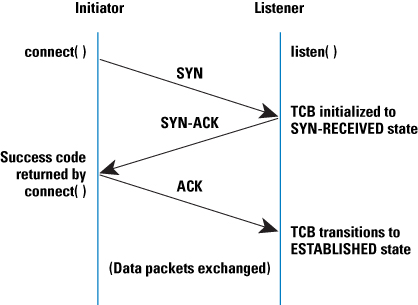 When using flow:established in a rule, you're telling Snort not to bother looking at [typically] the first three packets in a TCP stream. This is done because normally there is no content (Application Data) inside.

When not to use established in your flow option:

Remember, Snort is not a server; it is a Network Intrusion Prevention/Detection System (NIPS/NIDS). The only way it will reject packets is if you have it configured and running in an inline configuration (NIPS). If not, it can only observe traffic and cannot actively reject or drop packets.

Assuming you had Snort configured and running in inline mode, if you were to write a rule like:

... The rule would fire on any TCP packet that was seen after the initial 3WHS. This would appear to both the client and server as a successful connection, but no data would be transferred, because Snort would be dropping packets.

Remember that Snort is a detection engine, so don't think of it in terms of sending/receiving data or initiating/establishing connections. Think of it as a passive observer (or in the case of an IPS, a bouncer at a nightclub).

For more information on flow or the Stream preprocessor, please read the documentation I linked to above.

Hope this answers your question!

flow option choose the syn sender as the client. And just tell snort which direction the traffic is going.

And Snort does not affect traffic behavior, it inspect only in ids mode.

But it may be useless for complex network.

Not the answer you're looking for? Browse other questions tagged snort or ask your own question.

2
Snort Rule Writing (Alert Fires But Traffic Does Not Match *Intended* Rule)
2
Snort rule does not work when combining "content" fields
7
Snort rules to detect Meterpreter sessions
1
How to detect long lived SSH sessioned
1
How do I map the information in snort u2spewfoo output to the rule which triggered the alert?
0
Analyzing Apache log with Snort