I was recently reading up a PDF (https://www.owasp.org/images/0/01/OWASL_IL_2010_Jan_-_Moshe_Ben_Abu_-_Advanced_Heapspray.pdf) heap spray techniques when they mentioned heap spray with bitmaps. Now they didn't exactly explain how one could do, or accomplish this technique. When I tried looking up techniques on bitmap heap spraying it just came up with normal heap spray. So what I am asking is for some article ,webpage, or PDF that explains, and shows a brief piece of code how to accomplish a bitmap heap spray. (Also if someone could also give a short explanation on how heap spray with bitmap works that would help me out a lot too. Thanks!)

The general idea is to embed shellcode in a bitmap which a browser loads into the heap. 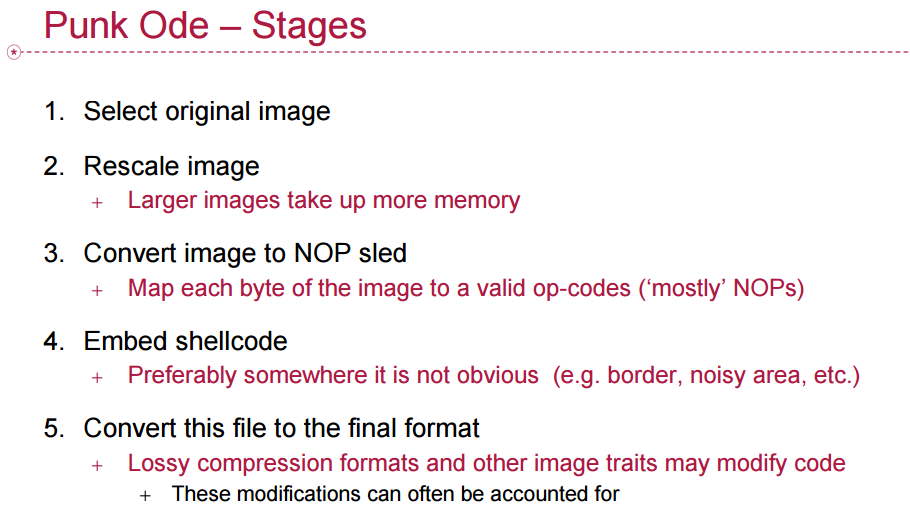 Also discussed in this paper is using code embedded in a gif to create an exploitable heap overflow in NetScape 6.x, x86 Linux RedHat 7.0, 15 years ago (slide 9).

As for the technique discussed on slide 13 of Advanced Heap Spraying Techniques, the code used to demonstrate it can be found in the section titled "Alternative ways to spray the browser heap" of corelan's Heap Spraying Demystified tutorial:

This standalone ruby script will create a basic bmp image that contains 0x0c all over the place. Run the script, feeding it the desired width and height of the bmp file, and the number of files to create :

Additional information on this subject from Phrack article Self-patching Microsoft XML with misalignments and factorials:

Because the memory region that must be controlled is rather big, my initial idea was to utilize some pre-calculated big objects for filling it, such as images. The core of the idea is that, every piece of data that can be consumed and processed by the target application (e.g. output or rendered) has its place and a representation in the target process memory. Thinking like that we don't get caught in stereotypical terms of 'heap spraying' and the specific techniques associated with it, many of which are already mitigated in browsers.

The idea of using graphical images in vulnerability development is not new. It was first introduced in 2006 by Sutton et al.[3], whose research focused mainly on the aesthetics of shellcode steganography in images rather than solving of any problems of heap spraying (as there were none at that time). Later, a few researchers revisited the same idea in the context of heap spraying, but it has never found a real application, mainly because bitmaps (as the only format capable of incorporating a byte pattern 'as is') are huge and can only be shrinked with the help of server-side measures, while using other image formats for memory control purposes is burdened with calculation problems of recompression.

Apart from the server-side GZIP compression, another solution that's never publicly noted is PNG. The PNG compression is very simple and does not affect the bitmap structure at large. As a result, a 2Mb BMP image containing a simple 1-byte pattern can be converted into a ~500 bytes PNG image, that will be decompressed back into the original bitmap in the rendering process memory.

There are two problems however:

The PNG spraying technique proved to be not suitable for this particular case because a highly variable memory padding pattern would be required, and so the images would have to be too big anyway. However it still looks like an interesting technique for rapid filling of huge memory areas with a simple byte pattern.

Not the answer you're looking for? Browse other questions tagged exploit heapspray or ask your own question.

19
Could someone explain parts of the FBI's Firefox 0-day?
8
Information disclosure attack, using a heap overflow
36
How is it possible to embed executable code in an image
2
Heap Spray in Documents
7
Are Heap addresses randomized by ASLR?
3
Heap Overflow - unlink() technique exploitation on x86_64 (64 bit)
0
Is Heap Spraying only valid for browser applications?
1
Exploitation tactics for heap over-reading?