Role of the chosen ciphersuite in an SSL/TLS connection

When it comes to a secure TLS configuration (e.g. for HTTPS), the topic is prominently about the supported cipher suites.

I want to fully understand which part of the cipher suite has which role in a SSL/TLS connection.

So from what I understand it generally works like this: 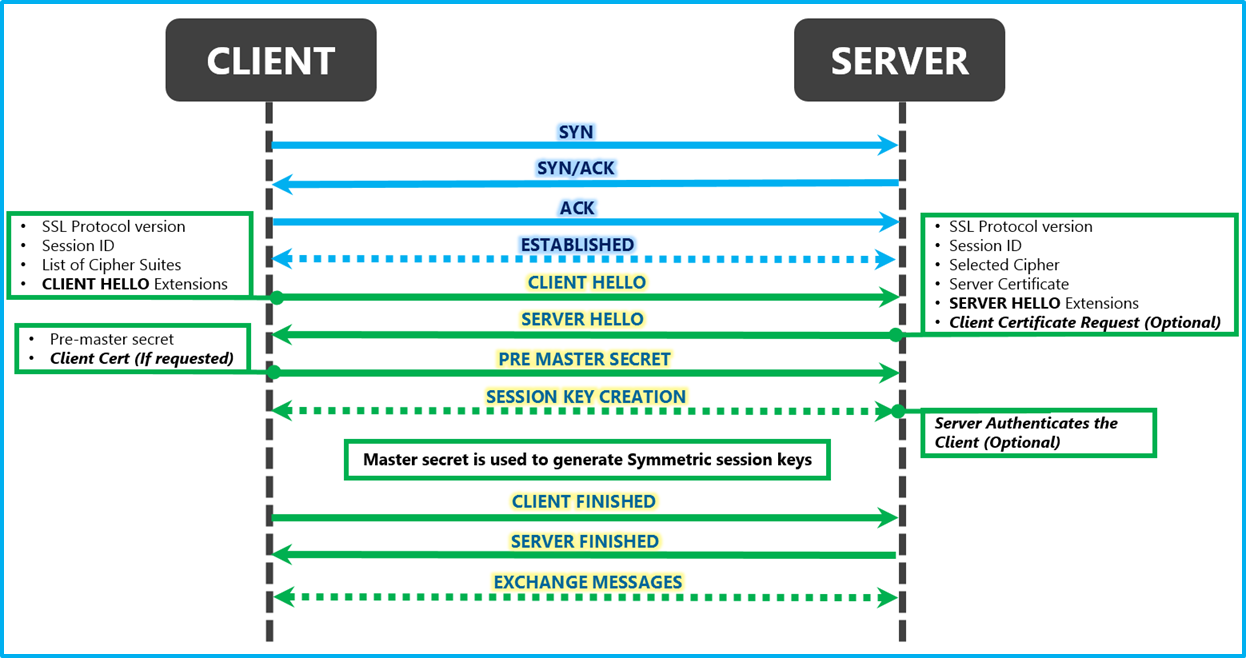 Is my understanding of the ciphersuite's role in a TLS communication correct - or am I wrong on some details?

So from what I understand it generally works like this:

For HTTPS yes. For other applications it varies; some make a new connection and some reuse an existing connection.

Ciphersuites plural, and quite a few other things in extensions, both shown in the article you link. (Which highlights SNI as relevant to the IIS/http.sys logic being described.)

The certificate contains the static (long-term) public key, and as ISMSDEV said is accompanied by any intermediate aka chain certs, and optionally the root cert. The article doesn't clearly state, but does show in the network trace, that the certificate(s) are actually a separate message but possibly in the same SSL/TLS record and almost always in the same TCP frames. For ephemeral keyexchange, as in the ciphersuite you specified but not the one in the article, the server's ephemeral key (with parameter(s) and signature much as ISMSDEV said) is in a separate message ServerKeyExchange; then optionally another message to 'Request' a client certificate, again not clearly stated and this time not shown; then a ServerHelloDone message, not described at all but shown.

The protocol version/format and key-exchange have already affected the server messages above. The symmetric cipher and possibly hash don't have effect yet.

Verifies the certificate chain, extracts the longterm (certified) key and also extracts and verifies the ephemeral key if used, which it is in the ciphersuite you specified.

Key-exchange has already started, with the server messages above; it is now completed using the client's key. The diagram you copy shows an arrow from client to server with (encrypted) pre-master secret because it is for a ciphersuite using RSA key-exchange, but you specified a ciphersuite using ECDHE-RSA key-exchange and for that the client's ephemeral publickey is sent (in clear) instead and the ECDH algorithm is used, independently at both peers, to derive the pre-master secret.

In addition if client certificate (aka client authentication) was requested, the client may send its own cert chain and its signature on a transcript through the client's key exchange message, (both) as separate messages, as described in the article but not shown.

Note the plural in 'session keys'. For some ciphersuites in TLS1.2, including the one you specified, the hash in the ciphersuite affects the PRF. For other ciphersuites, and all lower protocol versions, it does not. See What's the hash for in ECDHE-RSA-AES-GCM-SHA? .

Each endpoint sends a message ChangeCipherSpec to 'activate' the ciphersuite and then a message Finished, which is the first encrypted (and MACed) message. As the article says:

The CLIENT & the SERVER send each other a message informing that future messages from them will be encrypted with the session key. It then sends a separate (encrypted) message indicating that its portion of the handshake is finished.

Nothing directly uses the master key. Symmetric (data) encryption uses two of the session keys (one for each direction). For ciphersuites that use HMAC for integrity (as in the article), it uses the hash algorithm from the ciphersuite (and two more session keys), but you specified a ciphersuite which uses GCM mode, which as ISMSDEV said provides its own authentication (not using any hash).

I think you are on the correct lines. My understanding of the protocol regarding the cipher suites impact on the protocol is as such.

Client now awaits a response from the server...

Contains the highest version of SSL/TLS that the server supports that the client supports, a random nonce generated by the server, the session ID provided by the client or a new session id if none supplied by the client. The server chooses which cipher suite to use, for example:

which breaks down as:

- Key exchange algorithm - ECDHE_RSA - Elliptic Curve Diffie-Hellman Ephemeral with RSA. How the client will agree on the symmetric keys.

-Encryption algorithm - AES_128_GCM - The algorithm used for encrypting the payload data with the keys agreed. AES 128 (Advanced Encryption Standard with a key length of 128 bits) and using the block mode GCM (Galois/Counter Mode), which also provides message authentication to the encrypted data.

- Pseudorandom function - SHA256 - The type of algorithm used for the generation of the master secret, which is used to seed the creation of session keys. In this cipher suite it is using the well known SHA256 hash algorithm to offer high levels of entropy. certificate

Using the key agreement protocol from the cipher suite the server sends any elements it needs to the client. Example, for Ephemeral Diffie-Hellman this would be 3 parameters plus a signature on those parameters. The parameters are the two global DH parameters plus the servers DH public key.

19
What's the hash for in ECDHE-RSA-AES-GCM-SHA?
1
Understand DHE security in TLS

1
TLS 1.2 Handshake: How is the ECDHE public key signed by server?
9
Does the recommended course of action for preventing Logjam on Tomcat servers really eliminate all risks of weak DH keys?
4
Firefox & Chrome Strong Ciphers
2
Excluding cipher suites containing SHA or AES128
1
Setting up linux to be SOC 2 compliant
2
Is there any CBC based ciphersuite which are secure for known attacks like LUCKY13?
1
RSA key size in TLS ciphersuite with RSA key exchange
0
How to use DH certificate to configure nginx server