Do I have a current MITM?

I apologise for to terseness of this question; I have an issue. Google.co.uk is failing its HSTS on my browsers.

Is this an issue with google.co.uk or is this just me? Is someone middle-manning my internet connection?

While I can find plenty of sites that tell me google.co.uk is working I haven't been able to establish if the HSTS issue is me or Google. I suspect it's me but would like some 3rd party confirmation.

P.S.: This appears so far just for google.co.uk, and unfortunately snuck.me doesn't seem to be working to clarify other sites' non-HSTS certificates either.

After ten minutes of being down, google.co.uk now works again, however by using snuck.me I find the following: 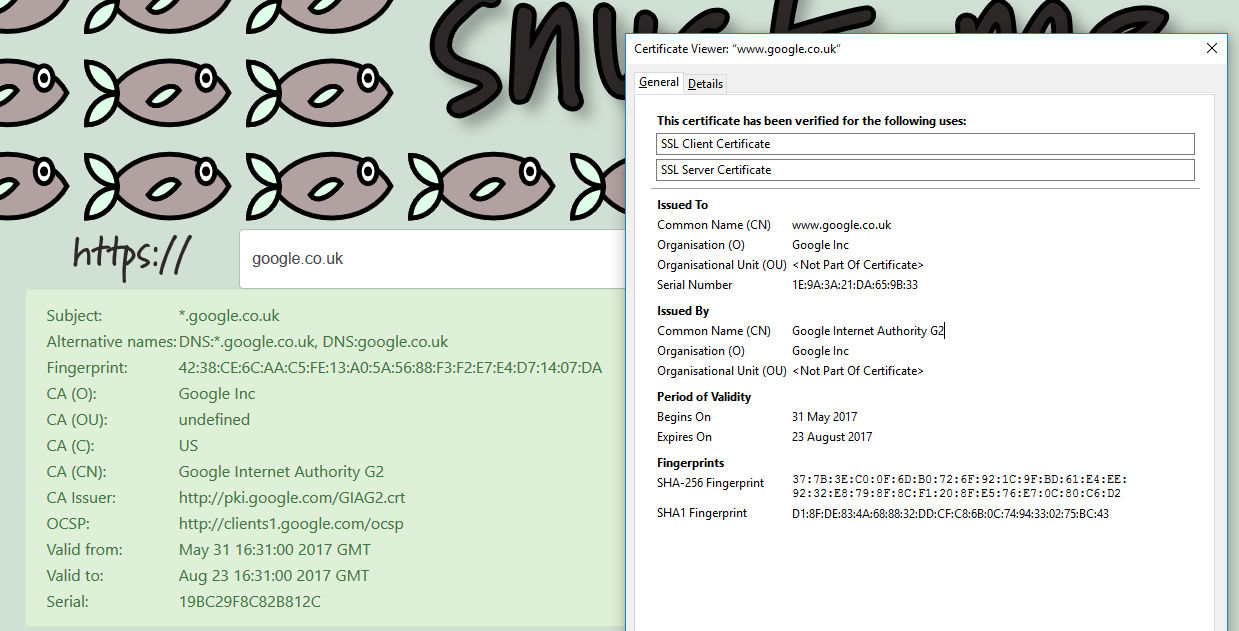 Fingerprint according to the browser:

finger print according to snuck.me:

Does this confirm I have a MITM?

Your browser rejected a certificate, but this doesn't have to be caused by an attack.

Google.co.uk is failing its HSTS on my browsers.

The warning you see doesn't indicate a problem with HSTS in particular. It's just Firefox saying: "The certificate appears invalid. And by the way, we won't let you add a manual exception because the site uses HSTS." 1

There are many plausible reasons why you got served an invalid certificate for a short amount of time. It could be a hickup at your ISP, a problem with your router, SSL interception by a captive portal (as mentioned by @FedericoPoloni) or, theoretically, a poor attempt at an MITM attack. The first step of investigation would be to check which certificate you were actually served.

Afterwards, you didn't correctly compare the certificates: You connected to www.google.co.uk but ran the third-party test against google.co.uk. These are technically different domains that serve different certificates depending on the indicated server name.

Here I'm testing each -servername with openssl and you should recognize both fingerprints:

1HSTS (HTTP Strict Transport Security) is a header which web servers can send to indicate that clients should never connect to the site over plain HTTP (for a specified amount of time). Your browser picked up that header during one of your previous visits to www.google.co.uk or preloaded it. One of the header's side effects is that the UI wont't allow you to ignore certificate warnings anymore by adding an exception.

Check the time in your system. Sometimes​ I get this error when my clock (system time) is wrong or when a time miss synchronization happens.

Not the answer you're looking for? Browse other questions tagged hsts or ask your own question.