What is the reason this command was run and why network hacked....clampi found was typed in at the command prompt 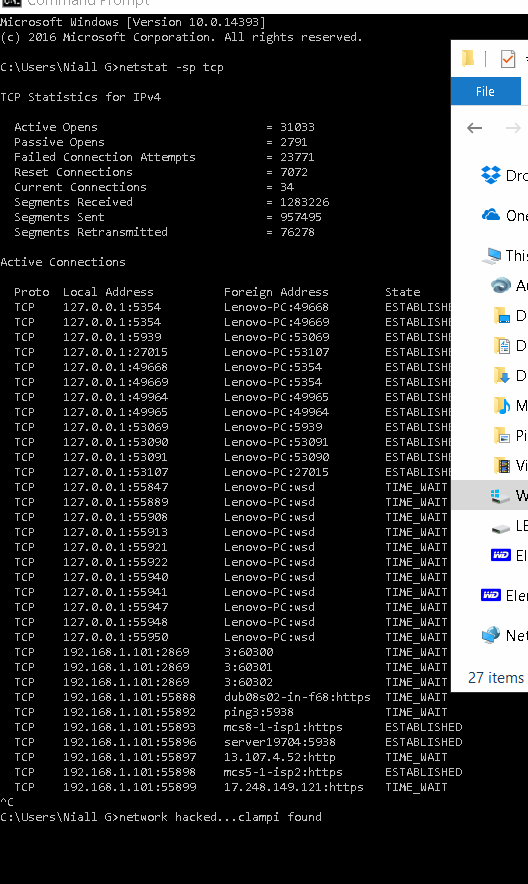 Title has been changed....somebody gave me the computer to fix after calling a number via a popup that was difficult to get rid off....and also used a phishing technique to get her to call a number so to speak to a microsoft engineer...he logged on and messed around and said 500 euro...

i'm not sure if he typed the "what the title of this question is" there for? to scare the user using a technical term?? or did the person make a mistake and write something in there that was meant to go into his notes?

had to refresh the machine, didn't have a chance to look into it too much, but it had me investigating wannacry which clampi is related....but was it just a pop up that caused the problem? or did he want to say it would cost the 500 euro to get rid of clampi...perhaps the attacker thought that this person would have heardd of the term....basically all i wanna know is if that was only meant for his notes? from the technical pov he wouldn't be using the term network hacked.

If i understand this correctly, you called the 1800 number and gave them remote access to your computer where they opened cmd and ran netstat and typed "hacked... clampi found"

What is happening here is theater. When the scammers "check the computer" they do a variety of things including but not limited to:

Each one is designed to show you true information about your computer but then twist it in a way to convince you to believe there has been a breach of some kind. This is the essence of their con.

The idea for your specific example here is that while cmd is running a command, like netstat or tree, it still takes typed input. You can open cmd right now and type tree. While tree is running type something like "VIRUSES FOUND, MUST KILL EACH AND EVERY VIRUS" You will notice that once tree has completed your text appears after the > in your cmd prompt. They usually use commands that take more than a few seconds to complete, just enough time to fully type out whatever they want so it doesnt appear one letter at a time but fully when the previous command is completed. netstat -sp tcp will generally take anywhere between 30 seconds to a minute and a half depending on connections. More than enough time to type out a sentence.

To the inexperienced this makes it appear as though a scan has been done and the result of that scan is output. In your case, they made it seem as though netstat is a scanner of tcp traffic and it found "clampi" a well known malware.

But it's theater, nothing more, they simply typed it so that, upon seeing it, the user enters a state of panic. In this state someone might do anything to fix the problem immediately! Well lo and behold your knight in shining armor, the tech support agent, who, for a fee of only 599.99 for the 3 month plan or 999.99 for the lifetime plan will personally make sure your computer is "hacker free" forever.

Its nothing more than a scam designed to prey on people who don't know the deeper aspects of computers or the full extent of their available features, which even today, is a lot of people.

Not the answer you're looking for? Browse other questions tagged malware scam or ask your own question.

2
Roommate Frequently Hacked — How Do I Protect My Network/Devices?
1
Fake popups from popular websites
1
My production Ubuntu server was breached through Redis and I found this script. Is it a decoy?