I'm in a process of learning how to perform a DNS cache poisoning attack.
I run everything on an isolated VM environment, for educational purposes only.

The setup is a linux machine with Unbound DNS Server configured as a recursive resolver, which I try to poison.

For simplicity, I allow myself to be MITM (for in and out packets).
I use dig to query the resolver for a domain name, for example, www.google.com.

The resolver queries some DNS server for an answer.
Then, using scapy and python-nfqueue, I catch the final result packet, and change the answer so it will contain only an NS name (ns1.google.com, sometimes ns2 etc) as an NS record, and an additional record of ns1.google.com with an IP of 6.6.6.6.

Here's a printscreen from Wireshark (of the final answer packet I modified): 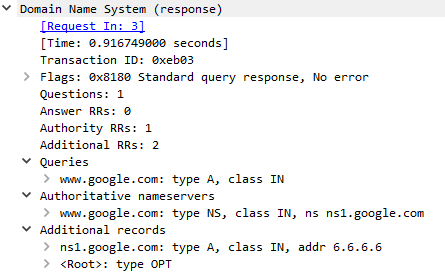 And here's a proof that the cache is poisoned: 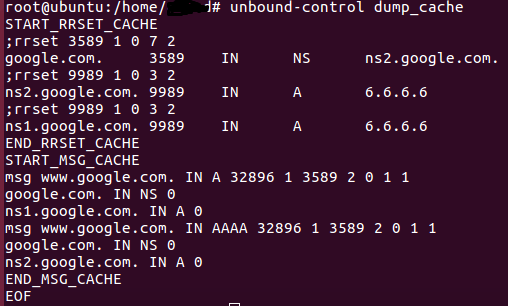 However it is not happening, and the resolver attempts to query an outer DNS server instead using the cache.

Any idea what am I missing?

Browse other questions tagged network man-in-the-middle dns spoofing or ask your own question.

5
When should a DNS entry be cached? What conditions should not be? How do I determine the TTL?
6
Attack on authoritative DNS server with high TTLs
5
How does a client know that a DNS zone is DNSSEC protected?
7
Kaminsky Bug DNS Cache Poisoning
3
DNS Server Recursive Query Cache Poisoning Weakness “Bounce DoS”
4
Intercept DNS query packet and send spoofed response after ARP poisoning
8
How to obtain privacy and authenticity with DNS?