Ask Question
Asked 2 years, 10 months ago
Active 2 years, 1 month ago
Viewed 856 times
0
Closed. This question is off-topic. It is not currently accepting answers.

Recently our organisation has been supplied a new ASA 5506-X to replace the old good PIX506e for a project. We have encountered a problem on routed interface on ASA 5506, which is very different from ASA 5505. We could not get the traffic passed from the Outside to the Inside and vice versa. I understand that traffic flow from Inside to Outside is permitted by default. 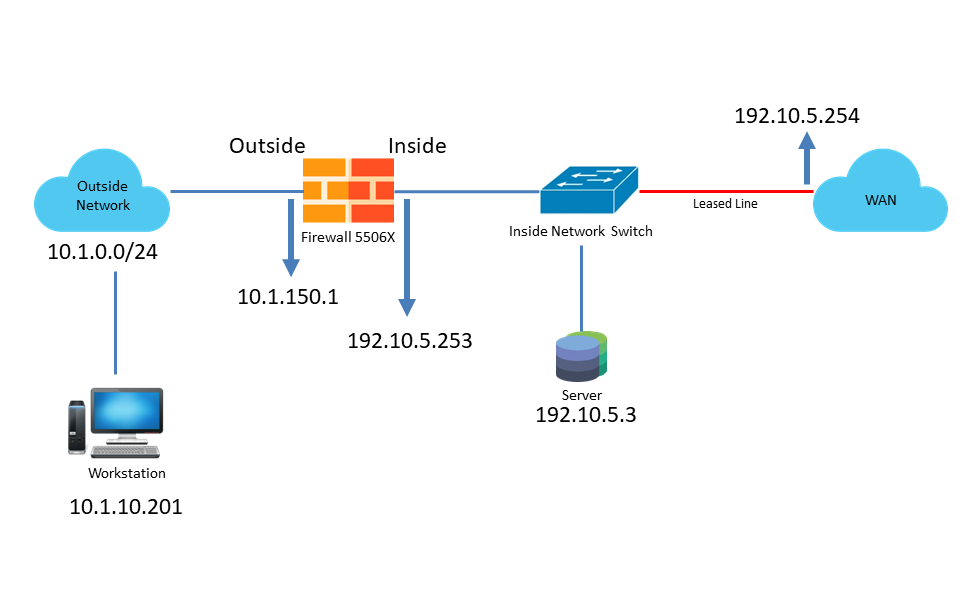 As the diagram describes, these are the summary:

What's is not working:

I did some research and found out that ASA 5506-X does not allow communication between the interfaces? I even specified ACL to allow ANY traffic from source ANY to destination ANY. I am using ASA version 9.6. What could be going wrong here?

Without you posting your config in here it's quite hard for me to help, however, I will attempt to give you an idea of why this might not be working.

Firstly, as you've stated by design you cannot ping an interface if you come from another interface, this is a security feature of the ASA and it is fully intended that way. This is sometimes known as a "Distant interface" - if you think about it, it's a good thing you cannot ping between interfaces, realistically you wouldn't want such a thing even if you think you do. I would like to add this can not be disabled.

Secondly, without altering your access rules you will not be able to achieve this either. There is a simple reason for this, the ASA has something called the Modular Policy Framework this is what is essentially stopping this operation from happening. By default, the MPF will not inspect ICMP traffic; in essence what this means is you will not be able to ping or traceroute from the inside to the outside. There are two ways you can achieve this.

By inspecting ICMP traffic this would subsequently allow this function, alternatively, you can add an access rule to allow the ping replies back in. Ideally, you would want to choose the first one as it's more secure. If you're not inspecting ICMP traffic it's within the realms of possibility for someone to issue an ICMP DoS attack otherwise known as a "Ping flood"

For inspecting ICMP traffic the following is an example of how you would achieve this.

In regards to the second option, a simple access-rule would be sufficient although as I've mentioned this is an ill-advised method.

Thirdly, in regards to your final point, you may have a static route in but it will never work if you don't allow the traffic back in. The problem, here again, is you will need an access rule to allow that traffic into the ASA otherwise it's just going to drop it as that's how a firewall works.

As I said for me to help I will need your configuration but as I've mentioned this is a question which would be better suited on Network Engineer Exchange rather than here.

Not the answer you're looking for? Browse other questions tagged network firewalls access-control routing cisco or ask your own question.

9
Management Network Best Practices
3
I'm using a Cisco ASA as a VPN endpoint. Where do the VPN clients get firewalled?
1
Cisco ASA Default Route Issue
2
IPS/IDS and Firewall Solution(s) to a Small Office
3
Security criteria for selecting a network switch?
2
Real-world risk of a Cisco ASA 5505 running IKEv1 aggressive mode with PSK
4
What exactly constitutes a scanning-threat on a Cisco ASA?