Practically, the hash value of a server host key can be (relatively) long and thoroughly compare it with the record again and again can be annoying. For example, for a given md5 hash value:

What if I only check the first half of it, namely:

Would I still get 50% security compared with checking the whole string?

PS: Programs like WinSCP and PuTTY only show the fingerprint through a pop-up window and thus I cannot copy the fingerprint and use a comparison program to compare two values.

No, you should not check only part of the key.

PS: Programs like WinSCP and PuTTY only show the fingerprint through a pop-up window and thus I cannot copy the fingerprint and use a comparison program to compare two values.

WinSCP has Copy key fingerprints to clipboard command exactly for this reason. 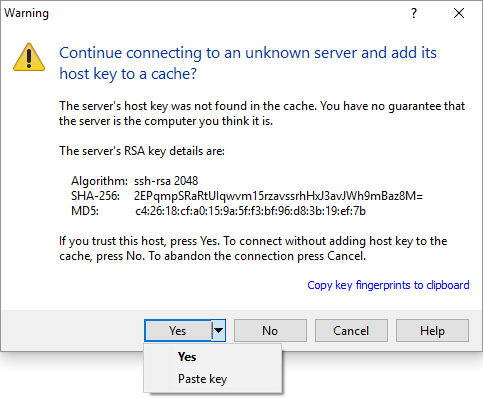 WinSCP also has Paste key command, that allows you to verify the key by pasting the expected key or its fingerprint from the clipboard.

And in PuTTY, you can at least press Ctrl+C to copy a whole message to the clipboard. You can then extract the key.

Though it is NOT, when you verify hashes with your eyes (and brain) manually, it sounds like a great optimization. After all, even minor changes in content should cause a completely different hash, right?

Unfortunately, that makes several assumptions that could be your undoing. Due to these assumptions, the reduced security is not a function of the reduced number of bits you're checking. But something else altogether, that is not easy to compute. But it is not likely a small impact.

There are other issues too, but I believe this is enough reason to not go this route.

So I always use tools to do the check for me. e.g., Linux sha1sum and sha256sum not only generate the hashes (to verify manually) but given the 2nd input, they can verify and tell you if all is well.

Not the answer you're looking for? Browse other questions tagged authentication cryptography hash md5 ssh-host-key or ask your own question.

3
Cookie based session variables
5
User password as key instead of hashing it
2
MD5 brute force on a faulty hash?
1
Why is finding a strong collision only half the work of a weak collision?
34
How to prevent username and password matches when changing a username?
2
Using a hash in place of user data
0
What does a hash output (a fingerprint) can be truncated mean?
6
What is the best way to show a (long) number for comparison?