I am relatively new to cybersecurity and hacking and I aim to learn ethical hacking as a passion alongside my mainstream education(Electrical Engineering).

My setup: I have set up my very own WEP WiFi network(intentionally made vulnerable by setting up WEP encryption). I have also set up a microcontroller(NodeMCU, in case you were wondering) to transmit some sensor data(DHT11's temperature and humidity data) over this WEP network. It would post the data over some URI (eg. 192.168.1.100/data).

Goal: To break into the network that the microcontroller is connected to(the WEP network) and sniff the data that is being transmitted. The communication is assumed to be by HTTP and is also assumed to happen by GET method. However, the exact URI is not known. So, GOAL 1 is to Find the exact URI and hence, get the data being transmitted. After accomplishing this, the next GOAL 2 is to try to spoof some data i.e send some garbage data and keep the actual data to ourselves.

THE PROBLEM: I tried sniffing data off the network(I am still unaware of the exact URI over which the microcontroller is transmitting data). I tried using Wireshark for this. it seemed to match the needs. But, I could not see any traffic on Wireshark from the IP address of the microcontroller. No matter how many times I try refreshing the page on my mobile phone, no traffic was shown. But, however, my phone did display the data. What am I missing? I tried sniffing on the same WiFi adapter that was simultaneously connected to the WEP network. I even tried putting up an external WiFi adapter on monitor(promiscuous) mode and then try sniffing data. All in vain. I need some help. 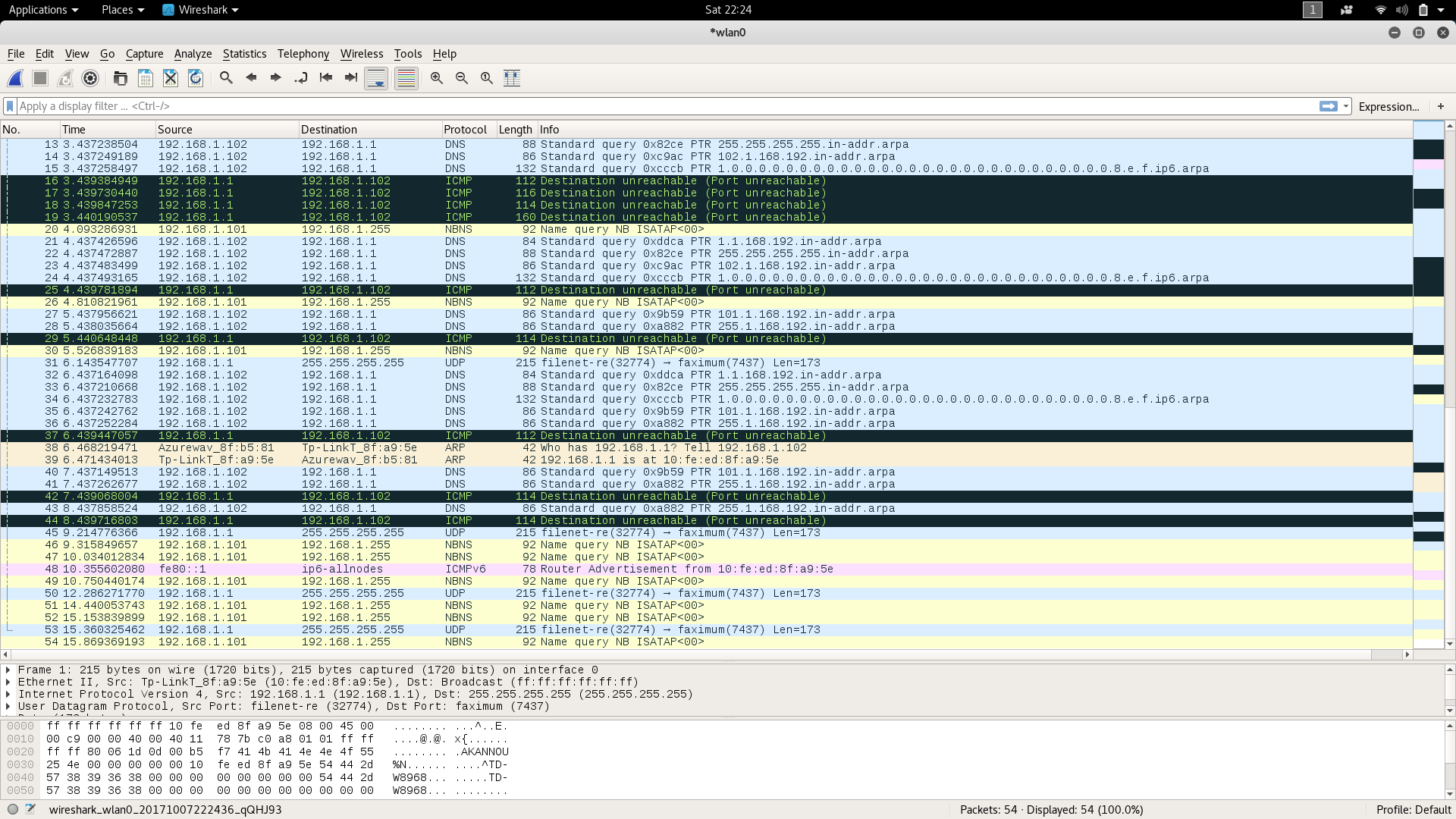 See? No traffic is shown from the esp8266's IP address 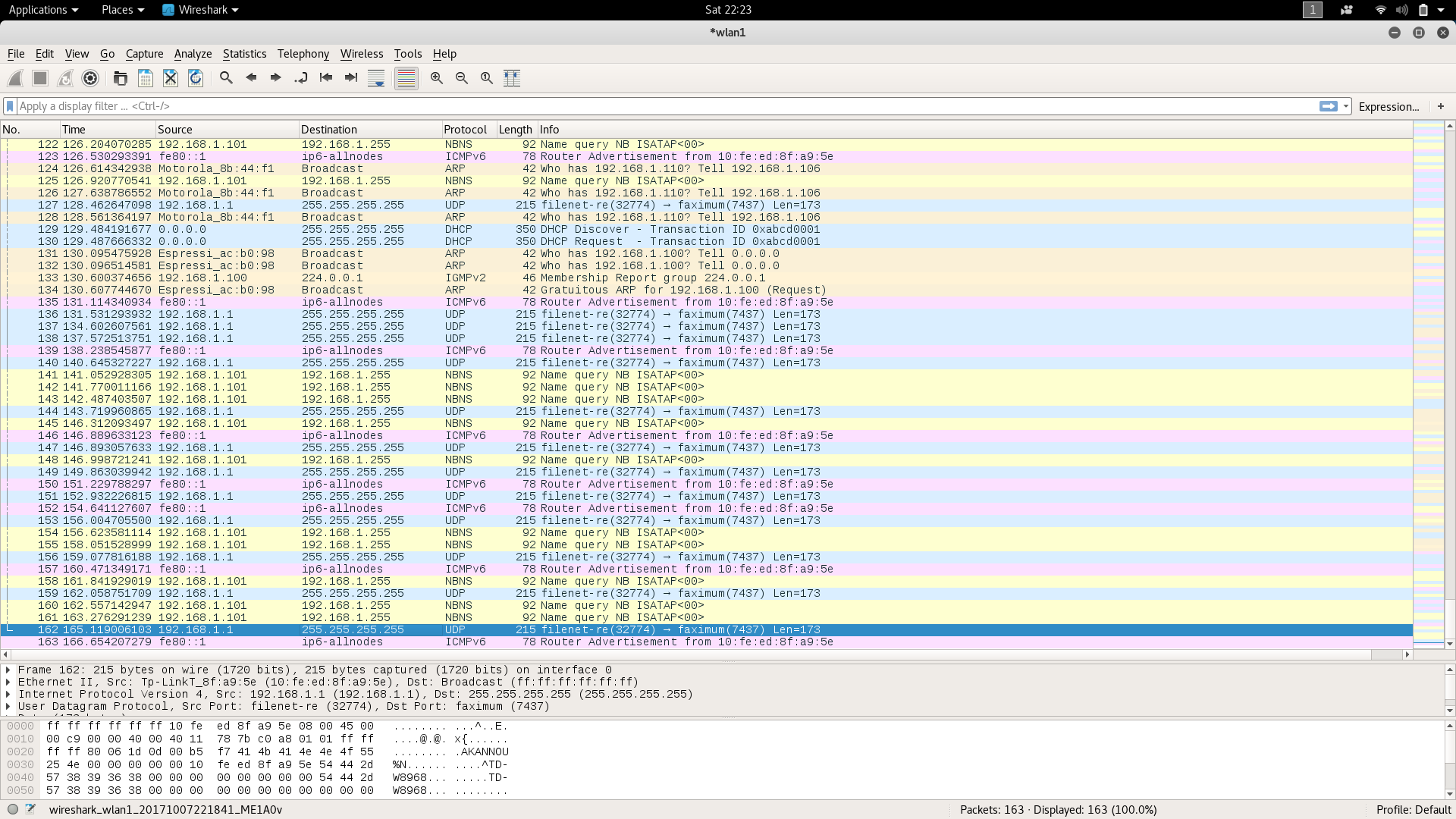 Now, tried using an external USB adapter. This showed up the ESP as ESPressi_ac, not it's IP. The Motorola.. is my phone. When I first connect it to the network, it sends out an ARP for the IP. You can see it in the 2nd screenshot. But, it gets no response. Still, I am able to view the ESP's web page (knowing the URI beforehand).There is no HTTP traffic at all. What am I missing?

From what I can see, your setup is something like this:

A workaround to this problem is to use monitor mode. Monitor mode is different from promiscuous mode in that monitor mode captures packets without associating with an access point, and promiscuous mode allows you to view all packets on the network you are associated with, even if the packets aren't addressed to you.

You could use monitor mode by passively sniffing packets from networks around you while not connected to an access point.

If the network you are sniffing uses encryption, provided you know the WiFi key, Wireshark can decrypt the packets for you.

If I get you correctly you have the following scenario:

If that is correct you might have missed an important point. Let's see what happens when the data gets pulled:

This means that your attack box (KALI) is not involved in that communication.

Why Is that? in a wifi there is no directed communication as such. As you know from switches (not hubs ;) in a wired network communication can be directed as per link. In that way you cannot receive data meant for another client. On wireless (afaik) you cannot direct traffic due to the physics of radiowave expansion in air. Instead every client (wireless network card) will discard every information that does not contain its MAC-Adress as target.

How do I solve this problem? Wireshark actually has a kind little switch that prevents your network card to dismiss (normally) unwanted packages. This behaviour is called "Promiscious Mode". Thats what you might be loogink for.

Under Wireshark's preferences dialog, go to the "capture" option. Here you'll see a checkbox for "capture packets in promiscuous mode."

Not the answer you're looking for? Browse other questions tagged wireshark sniffing wep or ask your own question.

8
How to fuzz proprietary protocol over SSL?
6
Why crack WEP or WPA/WPA2 PSK when it can be sniffed through monitor mode capture?
1
Sniff API request through proxy
6
Sniffing unencrypted traffic in datacenter
0
Legality of sniffing own traffic between mobile app and server
1
Wireshark - I can't see traffic of other computer on the same network in promiscuous mode
0
How to use Wireshark to capture HTTP data for a device on the same network as me