How to interpret this statement against 4096-bit RSA

While I'd agree that double-sized RSA keys may pose more problems than the gain in security possibly justifies, I am having problems understanding the argument made here: https://gnupg.org/faq/gnupg-faq.html#please_use_ecc

They state that RSA2048 corresponds to about 112 bits of security and RSA4096 to about 140 bits, and they state that the 28 bits improvement is "marginal". But the way I understand this, is that the conversion from "key bits" to "security bits" is that it (as an estimate) takes ~2112 operations to crack a 2048 bit RSA key and ~2140 operations to crack a 4096 bit RSA key. So in my eyes that still means that if they™ routinely solve the RSA2048 problem in one seconds by throwing all their CPU power at it, it would still take several years for the RSA4096 key. (Or: be slightly less paranoid and replace "one second" with "one minute" and "several years" becomes "several centuries").

Why would such differences still be called "marginal"?

Maybe the answer is that 112 or 140 bits is only for some brute-forcing (even though the naive brute force would be something like 1024 vs 2048 bis) - but wouldn't that rather imply that these numbers are inadequate to begin with as a means to describe the complexity/security?

The reasoning in the quoted advice is poor:

The United States’ National Institute of Standards and Technology (NIST) states that RSA‑2048 gives roughly 112 bits of security and RSA‑3072 gives roughly 128. There is no formal recommendation on where RSA‑4096 lies, but the general consensus is that it would come in somewhere around 140 bits — 28 bits of improvement over RSA‑2048. This is an improvement so marginal that it’s really not worth mentioning.

If you need more security than RSA‑2048 offers, the way to go would be to switch to elliptical curve cryptography — not to continue using RSA.

As stated in the question, even the 28‑bit (or 228 times) improvement in resistance to brute force from 2048‑bit RSA to 4096‑bit RSA is large (not marginal), enough for decades of brute-force computing progress, and could well make the difference between secure and insecure in say half a century.

Also, the 28‑bit figure quoted is significantly below general consensus, which would be more like 36±4‑bit. Factoring the public modulus of a properly drawn RSA key n with classical (non-quantum) computers is, as far as we know, best done by GNFS with effort 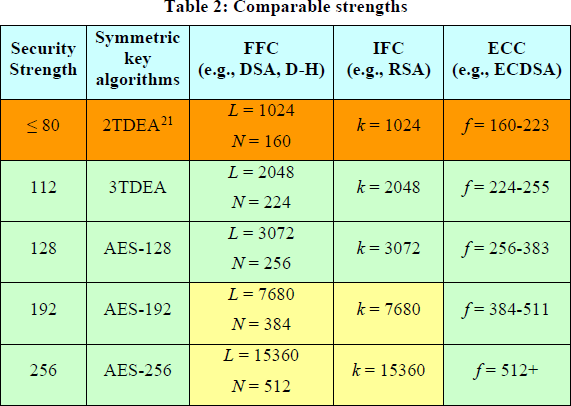 If there is a consensus, it is that

One correct argument to be made against 4096‑bit RSA is that currently 2048‑bit RSA is more than safe enough, thus 4096‑bit RSA way overkill. But a reasonable argument to use 4096‑bit RSA is the possibility of quantum computers usable for cryptanalysis; or/and, the need to repel those considering such devices might materialize in the usable lifespan of the key. 4096‑bit RSA is fast enough to be usable from most applications of PGP/GPG involving a post-2010 general-purpose computer; key and ciphertext size is bearable; so why not?

My advise is that 4096‑bit RSA is a sound choice for long term security in PGP/GPG. It is safe, interoperable, simpler thus better audited than ECC, and there is some credibility in the arguments that it gives a better level of security against hypothetical quantum computers usable for cryptanalysis.

Not the answer you're looking for? Browse other questions tagged brute-force rsa or ask your own question.

14
Why is ECC more vulnerable than RSA in a post-quantum world?